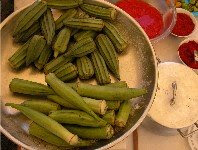 I just received my copy of Samuelsson's The Soul of a New Cuisine today, and I'm thrilled. He's definitely the poster child for the new wave of African Culinary consciousness. (By the way, there's a review of the book, with recipes, in September 2006's Oprah magazine.) I was nervous he wouldn't get it right, but he's done his homework, and his book feels genuine and fresh, if a bit glossy. It's a wonderful accomplishment, lavishly produced. It'll be a treat to work my way through it. I've dined in Marrakech and Cape Town as well as Accra and Jos, and am eager to try some of his recipes (though I'm pretty sure his injera recipe won't cut it for me. That soda water stuff doesn't give it the right texture).

He divided Central Africa up among North, West, and East Africa. I understand, and it's probably the most reasonable way to do it, but felt sorry anyhow. It startled me to hear that okra was originally from Ethiopia, because my research (e.g., The Cambridge World History of Food) indicated it most likely originated from tropical West Africa, which is what I've always thought. It looks like there may be some controversy there, but that's no biggie. I was happy he acknowledged Jessica Harris' legacy. Photographs are fabulous, the format of the book makes African food quite accessible to nonAfricans (they can identify with and not be threatened by him). He's very up front about his preferences, and as mine are towards Western Africa, I wished he'd placed more emphasis on that part of the region (more steamed recipes, like moimoi, or kenkey, and rubs like tankora, or yaggi, powder, and condiments like sheeto (shito, shitor), or gari. And when he said to substitute sweet potatoes if yams weren't available, that really hurt, as did his easy dismissal of palm oil (and so far I've seen nothing about palm butter). Still, as he realizes, there are many, many African cookbooks waiting to be written. If you ever stumble across this site, Marcus, thank you for what you're doing.
Posted by Fran at 10:38 AM No comments: 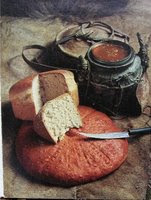 I've just posted a pdf file of the slides from the powerpoint talk I gave in Boston over the summer at the Association for the Study of Food and Society (AFSF) and the Agriculture, Food, and Human Values Society (AFHVS) joint conference. Hope you find them helpful. I had to delete some of the graphics since I was worried about protecting photographers' rights. For a summary of the presentation see the posting on June 12. By the way, in case you don't recognize it, the picture to the left is the cover of Laurens van der Post's classic 1970 African Cooking, a volume in the Time-Life Foods of the World series. 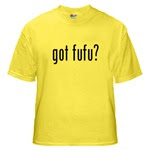 I just discovered http://www.cafepress.com/buy/fufu/africa, a great site to order African food-related t-shirts. I ordered "got fufu?" and "I (heart for love) African Food." There're dozens of others, depending on your favorite: jollof rice, cassava leaf, palava sauce, acheke, potato greens, cous cous, plantains, moimoi, gari, torborgee (I know that's Liberian, and it includes palm oil, but could somebody help me out with the details?), fufu and soup, roasted meat, okra, pepper soup, check rice and gravy, yams, etc.

Also, there's a new website in the U.K. that says they'll eventually specialize in African foods:
The African There's not much there now besides music, but you might check them out later.
Posted by Fran at 8:10 AM No comments: