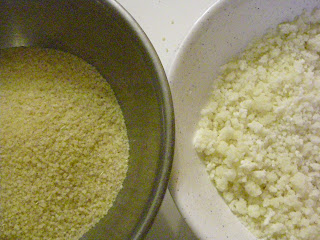 All semester (August through December) I've been blessed by the generosity of others, especially African/Africanist friends and colleagues. This time of year it seems appropriate to share some of my gratitude.

Today, I want to publicly say "thank you" to Inza Bamba for his recent Thanksgiving gift--a treasure "more precious than gold." He made it clear that the package of tightly packed granules, direct from Côte d'Ivoire, was for me. He knew how special it would be to taste "fresh" attiéké  as opposed to "dried," boxed attiéké  (like that I picked up in Washington DC last month). Attiéké is a bit like gari, but it is steamed cassava granules, and is more like couscous than gari. 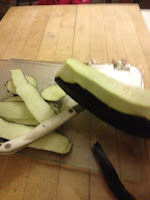 I know that he often prepares attiéké with "sauce aubergine," (eggplant stew) and is partial to lamb, so I decided to prepare the two together a few days ago, Ghana-style. ﻿ 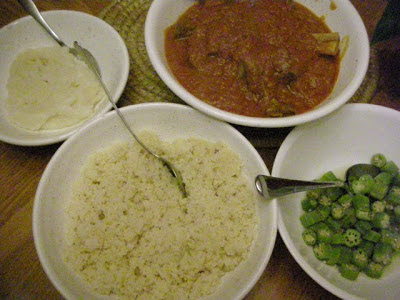 On my African Cookbook shelf It's been some time since I've commented on the latest (cook)books I'm reading/collecting, and also since I've thanked contributors  to The Africa Cookbook Project,
launched at TED Global in Tanzania in 2007. Yes, we're still collecting cookbooks published in Africa and written by Africans.

Rachel C. J. Massaquoi, the Sierra Leonean mother of one of my daughter Abena's  friends from Harvard,  published a book  in 2011 through AuthorHouse. Titled Foods of Sierra Leone and Other West African Contries: A Cookbook and Food-Related Stories, it has been a joy to read through its 159 pages. The book is filled with helpful information, including stories, cultural wisdom, photographs, and a glossary. It is truly a gift to those of us interested in preserving and sharing West African culinary history and recipes. What's more, it's currently on sale through AuthorHouse for $23.51 instead of the $46.28 price available at Amazon.com (use link above). It would make a great, unique, Christmas gift.

I'm especially interested to try her cassava leaf sauce (in Ghana, people favor cocoyam leaves, aka nkontomire or kontomire), plus her recipe for Sierra Leonean "check rice" (also popular in Liberia). She has done us all a great service. 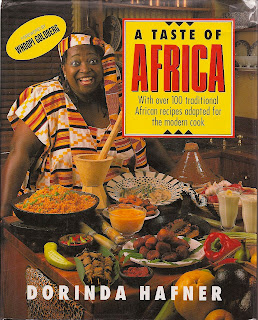 In 1993, Ten Speed Press published a cookbook by Ghanaian author and television cooking show host Dorinda Hafner that became a bestseller, A Taste of Africa. The book was published in hardcover and paperback, reprinted, and followed by a revised version in 2002. I recently picked up a copy of the revised edition, only to discover that it has quite a different feel. For one thing, the language has been toned down: "fufu" has been renamed "dumplings," "momone" has gone from "smelly" salted fish to simply "salted fish." Also, there are some additions (such as the recipe for "ham soup with basil and vegetables)," and she has reversed the names, for example, from using Ghanaian names ("shitor din" or "kontomire ne momone," "kubecake," "Tom Brown" in favor of highlighting more understandable English names as headings, with the traditional names usually in small underneath. Understandable, perhaps, but also a kind of loss. Still, the revised edition stands proudly on my shelf next to the first edition, and Dorinda's delightful 1996 memoir (also published by Ten Speed Press) I Was Never Here and This Never Happened--Tasty Bits and Spicy Tales From My Life.

Several weeks ago, on his latest return from Ethiopia, Prof. Greg Ziegler carried along a donation he correctly guessed was not already in the collection. Published in 2011 by author Teshome Berhe, it is a bilingual introduction to Ethiopian cooking and culture, in both  French and English (en français et en anglais): A table avec la Reine de Saba / Dining with the Queen of Sheba. Several of its 139 pages contain color illustrations, there are numerous historical anecdotes and cultural references, and in place of a table of contents or index it has a 5-page summary at the end. Another contribution to cherish. Thank you again, Greg. There are today many cultural and culinary spokespeople recording their heritages. It warms my heart, and we are all enriched. I'm sorry to report that due to the political problems in Mali, a much-anticipated photocopied version of a Malian cookbook was not procured, though Penn State doctoral student Kristal Jones is currently in Bamako and attempting again to obtain it for me.

I wish . . .
I wish . . .
I wish it were possible to digitize all these books so that they could have a wider circulation . . . Of course, as an author myself, I'd also like them to be available at a fair compensation to the writers.
Posted by Fran at 8:20 PM No comments: