Africa in Rio (at Yorùbá again) 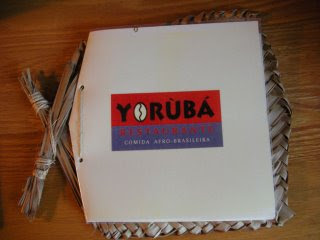 Not only did I discover Brazil in Ghana (see my previous blog posting), I once again discovered Africa in Brazil, and not only in Bahia. In October, 2006, my husband and I made a trip to Rio, and ate at a delightful restaurant called Yorùbá, with a charming atmosphere. I was happy to find not only the ubiquitous Afro-Brazilian dishes (like acarajé the descendant of West Africa's akla [a.k.a. akara, accara, kosai, koose, and kose], or carne de sol and various moquecas, but actual African specialties as well (like ewa, fried fish with yam, okra and dried shrimp, and shrimp piri piri. The staff kindly let me carry home one of their menus. When I returned to Rio during our 5-month stay in Brazil last winter, guess where my intrepid colleagues Theresa and Margarida (see my December 10, 2007 posting for more info about them) insisted on taking me? To a great little African restaurant. Right: Yorùbá again, but with new menus. 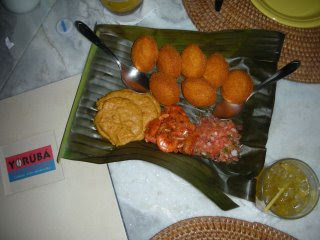 This time I was accompanied by part of the culinary elite of Rio, we got royal treatment, and I had a chance to chat with chef/owner Neide Santor. I highly recommend stopping in there if you're in that part of Brazil. 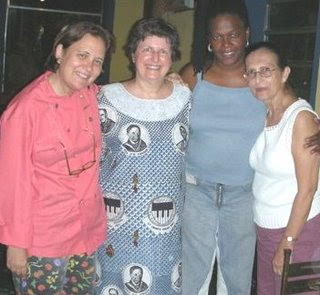 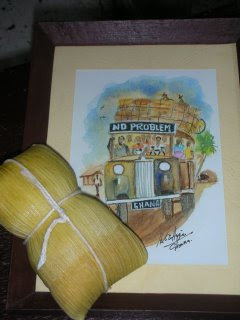 Just before we left Ghana in July, one day we dropped in at the Brazilian Embassy to chat with the wonderfully friendly and helpful staff there. When one of them learned I like Brazilian food, he insisted that I accept a packet of a steamed cornmeal delicacy.

I'm embarrassed to say that I misplaced the scrap of paper on which I scribbled both his name and that of the wonderful snack he gave me. I had to email my pictures to someone in Brazil to help me out, and learned that the name of the dish I enjoyed is pamonha. The one I had was a sweetened ground corn paste that had been boiled, but my friend in Brazil said he especially likes it made with cheese. Apparently they can be either sweet or salty/savory. Though wrapped in corn husks and boiled, it's very unlike Ghana's kenkey, which is heavier and fermented. Still, in the 1970s my sister-in-law Afua in Ghana used to love iced kenkey, a sweetened drink from crumbled or mashed kenkey mixed with evaporated milk and sugar (though we had no refrigerator to chill it and thus the word "iced" always seemed kind of silly).

I understand for pamonhas milk is added to the ground corn, or sometimes coconut milk. It is said that the word pamonha comes from the word for "sticky" (pa'muña) in the Tupi language. As soon as I relocate that slip of paper, I'll be sure to thank the embassy staff for their generosity.

It excites me to continue to learn about Ghana and Brazil's history of friendship and cooperation. I have already said that I would love to see more explicit culinary sharing between the two countries, from Ghana's palmnut soup to the Brazil's tapiocas. 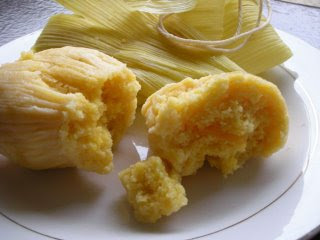 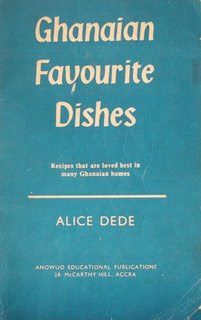 I remember a conversation with Barbara Baeta one day when she was talking about how Laurens van der Post came to Ghana and met with her in the 1960s when he was writing his pioneering Foods of the World volume on African Cooking. She was young and flattered, and generously provided him with numerous recipes used in the book--even allowing herself to be photographed serving at a dinner party in Accra (p. 83). However, she has always regretted that she took the small lump sum the publishers offered her, while a more savvy colleague from Ethiopia negotiated a portion of the royalties and made many, many times over what Barbara earned. I wonder how often Africans provide hospitality and recipes and end up with someone else receiving the credit and money. . .

In a related vein, there's something I've been needing to get off my chest for a long time. In the early 1970s when I first came to Ghana, my future sister-in-law gave me a copy of Ghanaian Favourite Recipes (Recipes that are loved best in Many Ghanaian homes) by Alice Dede. It was first published, as near as I can tell, in June, 1969 by Anowuo Educational Publications in Accra. The cover bears Dede's name, and the inside title page declares that the book was compiled by Alice Dede. In the facing page it states "The Author acknowledges with thanks the help received from officials of various educational Institutions in Ghana." 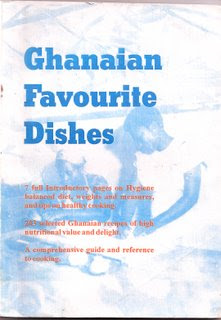 Now it is possible that Alice Dede did this as a work for hire, all the recipes were contributed by others, and once it was compiled all the rights reverted to the publisher. I really don't know. But having written cookbooks myself, I know that even a "compiler" has to make many, many decisions to create such a book, and engage in recipe testing, etc., and deserves credit for that. I've often wondered who Alice Dede was, and what her background was, and what happened to her. I'd love it if any of you can tell me.

Dede's book became a classic and was reprinted numerous times during the difficult 70s and 80s. Gradually, the book was given cosmetic face lifts (new covers, slight reorganization of recipes, removal of 5 pages of a final chapter called "recipes from other countries" replaced by 4 new pages of introductory material). By 1985, the "Recipes that are loved best in many Ghanaian homes" was gone from the cover (though still on the reprinted front page of the book, where only Alice Dede's name was gone), and the book was said to include "203 selected Ghanaian recipes of high nutritional value and delight," and to be "A comprehensive guide and reference to cooking." Somehow Dede's name and authorship disappeared. In the latest edition I have, from 2006, the title has changed to Ghanaian Cook Book: Favourite Recipes from Ghana, and the book now has a new "editor," Sophia Manu. Apparently, along with editorial advisor S. Asare Konadu, she supervised the latest face lift: a new cover with photographs and more color, including 11 color photographs throughout the chapters and a san serif type face that is larger and easier to read, as well as a better layout design. But as far as the substantive content of the book, the recipes, there are few changes. Ms. Manu moved chapter 6 (baked goods) to chapter 1. It includes two recipes for garri biscuits (#3 and also #16). In copying the menu table from the early edition, there were several errors from the original (omitting words, placing words in the wrong column), and there were also several errors in copying pages and recipes from the original index into the new index, or omitting recipes. 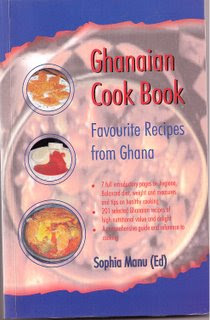 While the latest edition is admittedly more attractive, what bothers me, apart from the fact that I believe Alice Dede should still receive recognition for her work, is that the book is basically a word-for-word duplication of the original recipes, including measurements in cigarette tins and beer bottles, and no indication of any changes in the diet or cooking equipment or techniques in the last 40 years. This is patently not true, and yet the book purports and appears to be a "new" book. Many things have changed, and Ghana deserves a genuinely updated, comprehensive cook book.
Posted by Fran at 10:01 AM 2 comments: 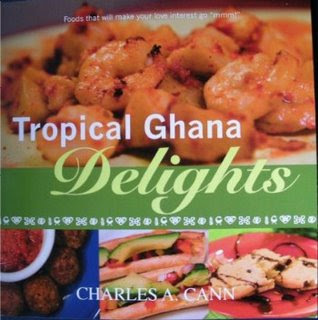 The Africa Cookbook Project has 3 new cookbooks. First, thank you to Ghanaian Charles Cann for a copy of his 2007 Tropical Ghana Delights. This brief 39-page paperback with lovely colorful photos and a matching breezy style contains a couple dozen recipes heavily infused with tropical fruits, from snacks and main dishes to sweets. (Charles, I was surprised not to see any tropical fruit smoothies in the book! I hope that's in the pipeline--Ghanaians generally seem to bond with them from the first taste). Charles' is not a book of traditional Ghanaian recipes: even his light soup recipe includes cucumber, cauliflower, fresh basil and carrots. Rather, it's what I like to think of as "second-" or even "third-" generation Ghanaian cooking. Like Marcus Samuelson, he's taken some basic flavor combinations and ingredients, and creatively added and mixed them up to suit himself. I'll soon be trying them out and reporting back. I must caution that while I love fresh fruits, I generally don't care for adding sugar or honey or sweet fruits to savory dishes. Of course, that doesn't always hold: I do love mango salsa, and sweet ripe plantains with savory stews. 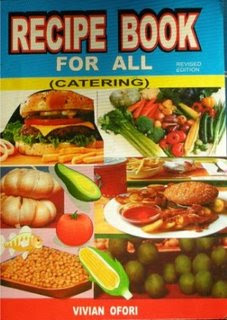 Secondly, after having a pleasant meal at a restaurant in Osu (my filing system is still disorganized, but think the name of the restaurant proprietoress, was Amelia Longdon, of Kalibre Catering Services), Amelia (?) showed me a book she'd recently picked up on the streets, called Recipe Book for All (Catering), an unpretentious but recipe-packed book by Vivian Ofori, apparently in its 2nd edition. I kept my eyes open and eventually found a copy for sale myself. It is a soft-cover 64-page book. The first part is devoted to recipes combining both traditional Ghanaian recipes (like jollof rice, ofam, and abolo), and "continental" recipes for things like pizza, spaghetti, and mayonnaise. These are bare-boned recipes with few explanations but designed for experienced cooks or caterers and using measurement mostly by weight. I counted just over 100 recipes. The book is divided into 2 sections, the first part the basic recipes and some general catering information; the second focused on the basics of nutrition, and including a number of recipes using soy beans and a lengthy section on moringa leaves and pods (Ms. Ofori explains moringa is called zogala or zogalagondi in Hausa, yevu-ti in Ewe, baganlua by Dagombas; ewe ile or idagbo monoye by the Yoruba and ikwe oyibo by the Ibos of Nigeria, and ben aile or boenzolive in French.)

Finally, shortly before I left I discovered the delightful Akwaaba Beach Guest House owned and operated by Swiss innkeeper Helene Jäger. Helene has a lovely collection of African cookbooks, but one that caught my eye, and that I'd not seen before was 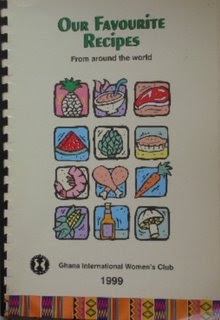 Our Favourite Recipes: From around the world. This is a wonderful collection of recipes put together creatively and deliciously by the Ghana International Women's Club in 1999. It is truly an international collection, with recipes from The Netherlands, the U.K., Lebanon, Yugoslavia, Sweden, Germany, Brazil, Japan, Belgium, India, Switzerland, Korea, Israel, Malta, Hungary, Trinidad, the U.S.A., France, as well as a good selection from Ghana, and other African countries, including Nigeria, South Africa, Zimbabwe, and Egypt. There was no time to photocopy the book, so I photographed all 95 pages and printed them out when I returned to Pennsylvania. Now I'm going working on completing the data base of the volumes of the project.

Please continue to keep informing me about other resources. Thank you Emeka, about telling me about the June 29 posting on Field to Feast about the Babula Cooking III booklet put together by missionaries in Zaire (as a survival guide using local ingredients). I'd love to get a copy for the collection. That kind of book is also important as social history.
Posted by Fran at 9:00 AM 2 comments: