I promised to let people know what's happening on the Africa Cookbook Project. First of all, I'm getting ready to move to Brazil in a week for 5 months, followed by 6 months in Ghana, which will slow me down with the database, but the project is moving forward. Devra Moehler has just e-mailed that she's sending a Ugandan cookbook, and Paola Roletta, the author of a Mozambican cookbook published by Europa-America in 2004 (Cozinha tradicional de Mozambique) wrote to let me know of her work. Actually, Europa-America has published cookbooks on cuisines of Angola, Cape Verde, and Morocco as well, all in Portuguese. I'd love to have them in the collection if someone would like to donate copies (remember, there is no budget for this project!) Also, people from around the globe are talking about the project, teaching me about their cuisines, even collecting recipes for me (maybe there's another book in all of this?) Though I'll be away, books can still be sent to the BETUMI mailbox: BETUMI/P. O. Box 222/State College, PA 16804 USA.

I'll soon post information about a few of the culinary entrepreneurs I met on my recent trip to Ghana, including a shito maker, a scientist, and a store owner.
Posted by Fran at 8:51 AM 3 comments: 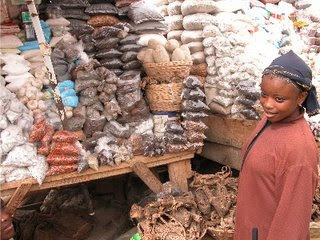 Yesterday I received my copy of the just-published Sub-Saharan Africa volume of The Greenwood Encyclopedia of World Popular Culture, edited by Dennis Hickey, with Gary Hoppenstand the general editor of the series. I wrote the 30-page chapter on Food and Foodways, and am proud of a couple of things in it: a table (pp. 102-3) detailing well over 2 dozen carbohydrate/starch dishes by name, region, country, preparation techniques and ingredients--sadza, fufu, gari, injera, atapa, ugali, etc.--and the inclusion of some classic recipes, like mbanga soup and sukuma wiki. I am pleased they included two of my photos in the book (to the left). Unfortunately, the book is not sold individually, but if you are lucky enough to be near a school or library that buys the 6-book series (about $700 altogether), check it out! North Africa is covered in the volume North Africa and the Middle East. 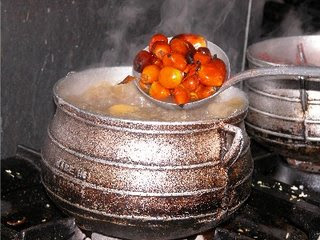 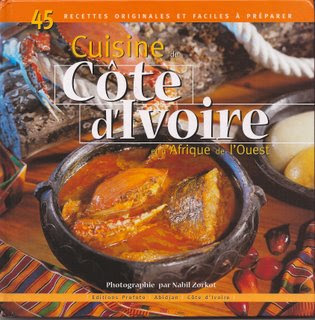 On the left is the latest cookbook to come to the collection (thank you TEDGLOBAL fellow Issa Diabate), and below is the first African cookbook I ever received, in 1971, from my sister-in-law-to-be. I know I'm repeating myself, but thank you to everyone who is helping spread the word. Also, thank you to Tom and Barbara Hale of Penn State University, who have promised to donate from their collection when I return to Pennsylvania. By the way, there's no reason that the culinary heritage should exclude other types of culinary work, from videos to articles.

Secondly, included here is the brief interview with Barbara Baeta that I promised to post. It is preceded by a few minutes of introduction. 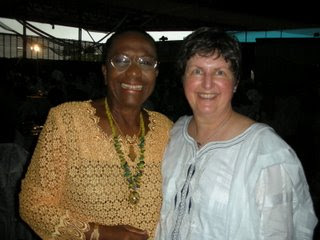 While en route to TED GLOBAL I stopped in Accra briefly for the fabulous 70th birthday celebration for Barbara Baeta (a.k.a. "Auntie Sika"). I've posted a few photos at flickr (betumi account). Suffice it to say here that it was amazing. At the Ridge Church service before the luncheon I was moved to tears as her family from the Volta Region spontaneously erupted into dancing and singing, and finally I felt free enough to join in with the others. She is truly beloved by those who know her. Soon I'll post a video clip I took during an interview a few days later in her home (on my return to the U.S. after TEDGLOBAL) when over some of the special birthday cake she'd saved me she shared a few memories of her 50 years as a professional in the food service industry in Ghana (especially of having coffee with Jimmy Carter and the time Queen Elizabeth II used Barbara's room as a dressing room.) For today I just want to mention the wonderful menu served to over 1,000 invited guests at the Trade Fair Center. There

My greatest sadness was that I had to grab my food before the serving officially began and gulp it down so that I could catch a flight to Tanzania. To my dismay I missed the luscious dessert table altogether, especially the tiger nut pudding, which is one of my favorites. Oh well, my greatest comfort is that I should be back in Ghana for 6 months beginning in January 2008.