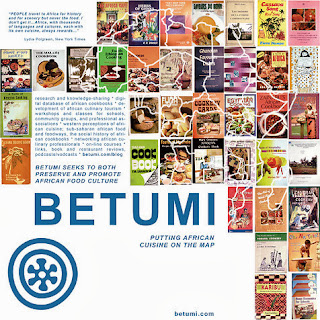 Africa Cookbook Project --we now have collected well over 120 books written by Africans and published (mostly) in Africa. They range from mimeographed (yes, before the 1960s, before  photocopying or scanning, there was mimeographing) informal collections of recipes to sophisticated full-color print books. They are in English, French, Portuguese, Amharic, Malagasy. . . We have also collected dozens more cookbooks published outside of Africa and/or written by non-Africans, along with dozens of  African-food-related reference books.

The earliest books in the collection were originally published in 1933 (The Gold Coast Cookery Book,  by the Government Printing Office in Accra, reprinted in 2007 as The Ghana Cookery Book by Jeppestown Press in the U.K. AND the 1934 The Kudeti Book of Yoruba Cookery by J. A Mars & E. M. Tooleyo--we have the 3rd (Revised) Edition (1979) and the reprinted and repackaged 2002 edition, all from Lagos.

The most recently published additions are: from South Africa,  Ukutya Kwasekhaya: Tastes from Nelson Mandela's Kitchen by Xoliswa Ndoyiya with Anna Trapido, published in 2011;  from Ghana, Florence Sai's Aunty Mama's Cook Book launched in Ghana in December 2011, and from (Côte d'Ivoire (via France), Marguerite Abouet's  Délices d'Afrique, published in 2012 by Editions Alternatives.

A huge thank you to everyone who has contributed so far to this project. One immediate mountain that needs moving is getting all of the books into the fledgling data base. We need help to do this. Maybe the next step after that is getting some of the earlier works digitized and available to everyone, while ensuring that there is fair compensation to authors and publishers. 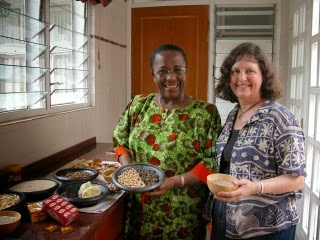 As many of you already know, for over a decade (when the photo on the left was taken), Barbara Baeta and Fran Osseo-Asare have been collaborating on compiling an ambitious Ghanaian cookbook designed as a basic cooking course. It will feature regional variations and step-by-step instructions for a wide range of Ghanaian recipes (roughly 150), along with Ghanaian artwork, scenic shots, and anecdotes from both of our lives.

We're thrilled to report that in August 2013 we signed a contract with Hippocrene Books, respected for over 40 years as a publisher of ethnic cookbooks. The manuscript will be completed by the end of August 2014, and the book is expected out 9 months later, around May 2015. Thank you to all of you who have been supportive of this unfolding dream. We trust that, like all truly great things, it will prove worth the wait.

P.S. Those of you who have offered to help (or would like to)  with the final recipe testing, stay tuned. We welcome your involvement, and will soon give more details on how you can be a part of this project. 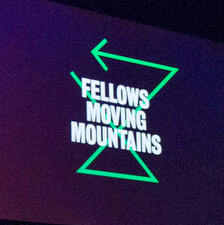 This past August (2013), I was invited to attend the first ever TED Fellows Retreat, held in breath-taking Whistler, Canada. The "retreat" was so action packed it would have been better named TED Fellows Advance. Amazing talks, amazing networking, amazing gifts, amazing resources, amazing energy . . .

It was also the first reunion of the original 2007 Fellows group from TEDGlobal: Africa: the next chapter We were disappointed that the Canadian government denied visas to some of the African Fellows, but it was still wonderfully encouraging to catch up on what's been happening the past 7 years all over the continent and beyond. 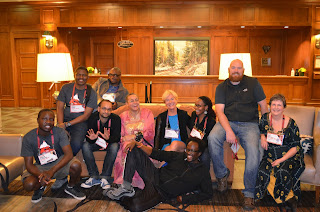 One activity during break times was an "international tea party," featuring teas the Fellows brought from around the world. I carried along some S. African rooibos teabags my Ghana-based architect son DK (2010 TED Global Fellow) brought me from Cape Town and gave me when I was in Ghana in July (Incidentally, I think we're the only parent-child Fellows in TED!) Plus, I cooked up some fried plantain chips to carry along. The first evening at the retreat I brewed some bissap (hibiscus iced tea) to chill and serve with the chips to my fabulously talented and amazing fellow Fellows. Very grateful to Emeka Okafor of Timbuktu Chronicles, Tom Rielly, and all the other members of the TED Fellows team who made this renewing experience possible. My next post will share the progress on my dream and the mountains I'm planning on moving (the theme of the retreat), with your help. 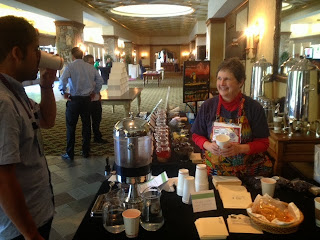 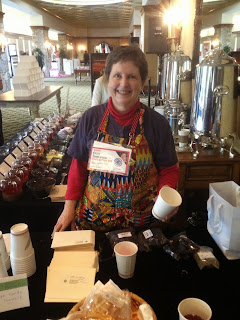 Around the House, kpakpo shito and water leaf 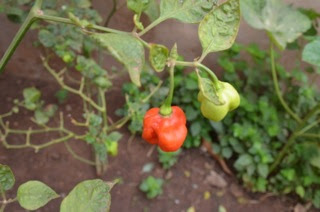 Fall is now arriving in the US. Nights are getting colder, yet the warm memories of a month in Ghana during June and July are still strong.

Here are a few photos from my time there. On the right and below are photos of the kpakpo shito bushes planted in our yard in Baatsona (near Tema). Kpakpo shito (shito means "pepper" in Ga) is my favorite pepper from Ghana. I've tried unsuccessfully to locate seeds in the U.S., with several local organic farmers willing to grow them for me. 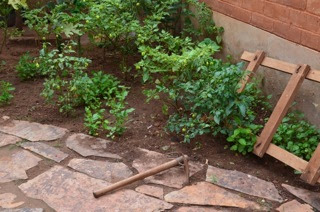 If anyone knows how to legally import them from Ghana, please let me know. Kpakpo shito has a wonderful, almost sweet fragrance, along with a spicy heat. I didn't have to buy peppers at all the 4 weeks I was in Ghana! I wait for them to turn red before cooking with them, either whole and "popped" between my fingers, or seeded and sliced.

My son Yaw Dankwa also planted some greens he brought from Nigeria, called "water leaf" or what sounded like "boca-boca" in Ghana. They have small purple flowers. He mentioned that they can be cooked like cocoyam leaves (nkontomire), and that in Nigeria people sometimes also just cut the leaves up and add them to food. I never had a chance to cook some this trip, but did check in with the knowledgeable Ozoz Sokoh, of Kitchen Butterfly fame, who confirmed that water leaf  is ". . . an aggressive plant and I'm less than happy with it at the moment as it overtakes every thing with its self propagation. Worse than mint! . . . But we use it in soups, with other greens (pumpkin leaves and another veggie we call 'green'), with ground melon, stirred into tomato sauces aka stew." She also provided a link for more information, including its history and scientific family and name, Portulacaceae, Talinum fruticosum (T. triangulare).  Apparently the leaves are  loaded with vitamins A and C, calcium and iron, and are grown in many tropical areas of the world besides West Africa.
Thank you again, Ozoz. 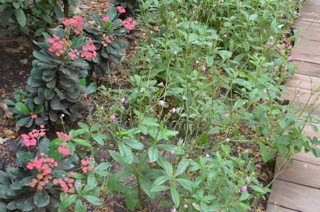 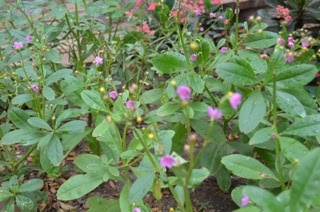 In central Pennsylvania, it's almost impossible to get fresh sugar cane. In Ghana it's a totally different reality. Last month I experimented with this versatile natural food, (Naomi helped me break it into pieces and peel it): 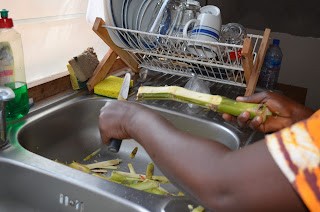 The sugar cane can be cut into longer sticks as drink stirrers (shown here with grapefruit juice), aka "swizzle sticks." It can also be cut into smaller sticks (I tried cutting it into rounds, too, but that did not work as well) that can be chewed as a simple, refreshingly light dessert or afternoon snack. Yum. A perfect example of "more with less." 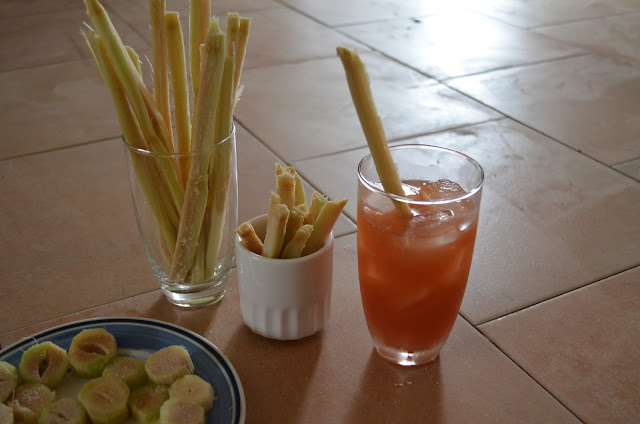