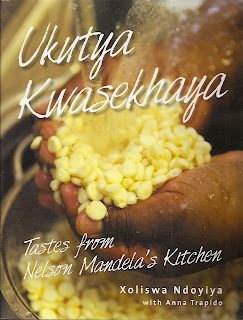 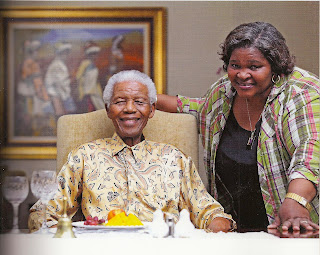 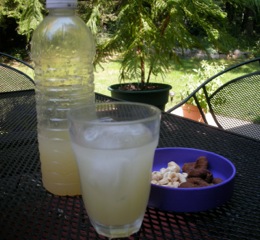 Ahhhh. The end of summer. Time for a cool drink in a shady spot before classes begin on Monday. In this photo I've paired it with some humble peanuts and the "choco-twemo" I'm working on, a version of atwemo that incorporates chocolate powder and groundnut paste (peanut butter), (or "choc-atriemo" as my son Yaw DK has christened it.)

Last week, along with the bissap, I prepared several liters of ginger beer for my trip to Hershey. It was with a shock that I realized that I've never posted my simple recipe for this soft drink popular throughout sub-Saharan Africa. Ginger beer is often carbonated, and made with yeast, but this version skips that step. I still like the bubbles, so I simply use seltzer (carbonated) water to dilute the concentrate to taste. It's always fun when folks shake their heads and say with awe: "You made this from scratch?"

Serve the ginger beer well chilled (over ice cubes if you're North American and like "ice blocks" as in the photo above), and diluted to taste with water, seltzer water, or even ginger ale. I use about 1/2 cup of ginger beer per serving. It's said you can mix in some rum, vodka, or other alcohol, but I've never actually tried it that way.

Come to think of it, this is just as well a spicy, refreshing drink for the fall. Labor Day picnics, anyone? 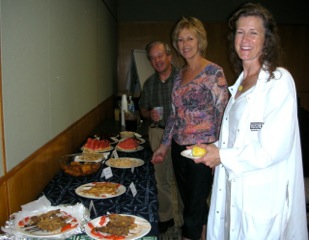 Last week I spent several days in Hershey, PA, at The Hershey Company. We had fun cooking and immersing ourselves in West African culture, both in larger groups presentation-style, and in smaller groups in test kitchens. To the right are some of the snacks we prepared one day (beef and chicken chichinga [Nigeria's suya]), akara (aka kose), groundnut [peanut] "cakes,"  etc. 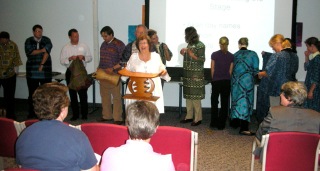 On Monday we explored music, fashion and daily life while we tasted a few West African dishes, from groundnut (peanut) stew
and bissap [aka zobo] to green plantain chips, moinmoin and gari foto. Though my online recipes contain meat and poultry, we  adjusted them and added vegetarian versions as well.

On Tuesday we prepared one of my favorite snacks,  kelewele with peanuts, along with corn and coconut and some atwemo (twisted cakes),  washed down with ginger beer or bissap. The staff were all enthusiastic and helpful, and good sports, and I believe we all had a fun time. I'm still trying to perfect a version of atwemo incorporating cocoa and peanuts, but haven't quite gotten it right yet. 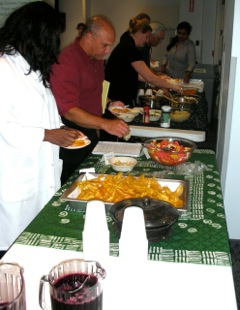 Along the way, I  learned more about Hershey's involvement in Africa and we talked extensively about life in West Africa,  flavor principles, meal formats, cooking techniques, health challenges. It was a hectic time, but quite rewarding. 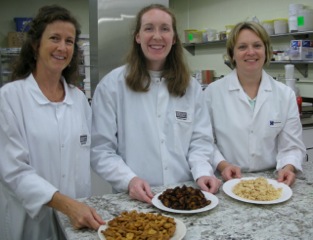 Betumiblog in Arise Magazine: Just before leaving for Hershey, I received an email from Adhis at Chef Afrik sharing that she was
". . . featured in the August issue of Arise Magazine which is one of the premier magazines covering African culture. It was a pull-out feature next to an interview article with Marcus Samuelsson about his new book Yes, Chef. I was asked to name the top African food blogs . . ."
She graciously listed me in her top ten, generously calling me "the godmother of African food blogging." It made my day! Check her August 9 posting out: it lists some of the  best food bloggers writing about African cuisine.

Things continue to heat up here as summer draws to a close. I'm now getting ready for my new class on food culture in sub-Saharan Africa at Penn State, which starts in a week.