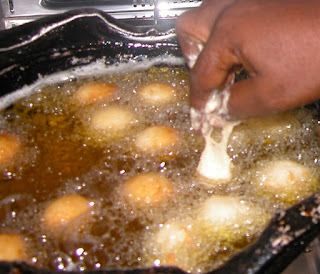 In Ghana they make a kind of doughnut called togbei or bofrot (called "puff-puff" in Nigeria) shown in the picture at the left. It is very similar to the DRC's mikate. When I first learned of mikate, I believed it was made solely from cassava flour, but that was incorrect.

Stany Nzabas, my husband's colleague from the DRC, explains that mikate is the plural of a Swahili word for bread, and Anne Masamba clarifies that in Lingala mikate is the plural form of the word (mokate is the singular), whereas in Kikongo, mikati is the plural form, mukati the singular.
Stany Nzabas further commented that in the DRC, the French name is beignet, and these are a popular  breakfast food with coffee. Sure enough, I found a recipe online (in French) for beignets congolaise  as well as cooking videos (all in French) demonstrating clearly the steps in making  Beignets Congolais, with slight variations:
Comment faire les mikate au beignet congolaise, Part1
And Part2
As well as Recette Beignet nature  à la congolaise

There are also mikate recipes online from Tanzania such as one for mikate ya Maji, or Zenji crepes.

Here is a final interesting historical footnote: While Anne indicated in her reaction to my last post  that nowadays mikate are commonly made from wheat flour, it's possible that rice flour was historically part of the mix. Her comment reminded me of a question my friend and culinary colleague Gisele Perez posed earlier this year in a  blog posting on her painperdue site, called "Calás--the search for a lost food tradition" in which she was searching for the roots of the famous rice beignets that "were long a special treat in New Orleans Creole households," especially among very Catholic families. I wonder if there is a Congolese connection . . .

Last week I wrote about a Brazilian cassava (manioc) cheese bread called pão de queijo. I've also been doing some research  on Central African Cuisine and Culture for a talk I'm giving at the Textile Museum in Washington DC on December 11, in conjunction with an exhibit they have called "Weaving Abstraction: Kuba Textiles and the Woven Art of Central Africa" (details at: http://www.textilemuseum.org/calendar/calendar.htm#Dec).
After the afternoon talk, there will be a reception and a chance for guests to sample some Sub-Saharan African dishes. I hope to include some food from the traditional area inhabited by the Kuba (or Bakuba) peoples in the DRC. As I've never had the good fortune of living in the Democratic Republic of the Congo, among other things, I turned for advice to my graduate school colleague from my Berkeley days, Anne Masamba.
I told her we're supposed to steer clear of dishes with peanuts (sigh), and she was dismayed because 2 of her favorite dishes are mwamba nsusu (similar to chicken groundnut soup in West Africa), and mfumbwa (a dish of finely chopped "gnetum africanum," aka a type of "wild spinach") cooked in a sauce with onions, tomatoes, palm oil, smoked fish, and peanuts. I also lamented the difficulty of locating a supplier in the Washington DC area of the cherished cassava staple, wrapped in banana leaves and steamed, then "sliced like round bread" and eaten with sauce, called kwanga. According to Anne "It is fermented and tastes a little like a sharp cheese . . ." She also recommended makayabu (munsambu), a dry salt fish dish. And mbika, using pounded seeds (like West African agushi or egusi) to coat fried meat and then steaming or grilling it.
She told me, too, about a kind of popular snack food called "mikaté," a fried dough she said was a bit like the togbei, bofrot, or puff puff of West Africa that I've blogged about before.  [NOTE: I'm adding this update on Nov. 9: it turns out these are not actually "cassava" donuts. Rice flour or wheat flour are a part of the equation. I'll post more about this on Nov. 10]
The interesting thing to me was that in the DRC she remembered the mikaté were made with cassava flour, and no wheat flour. I begged for the recipe, which she duly sent me, and today I've tried several versions with little success. While I'm testing the recipe, I've cut down her proportions by 2/3rds (her recipe called for 3 cups of flour, but I used only 1). I'm working on 4 different versions so far.  Anne recommended that I mix half wheat flour and half cassava flour. I decided to try 2 different types of cassava flour (one being Ghana's kokonte aka lafu) and one being Bob Red Mill's tapioca flour. I also tried making a version with only kokonte and only tapioca flour.
My initial 2 fried versions were unsuccessful: the recipe says "add enough water until the consistency of thick pancake mix." To the cup of kokonte I added a cup of warm water to the first batch (too much, so I had to increase the dry ingredients); the second one (a mix of wheat and cassava flours) seemed okay, but it seemed to soak up oil like a sponge when I fried it. Both those batches got tossed out.
I have 2 more batches fermenting (but the yeast seems insufficient to get  the fermentation process going--I'm wondering if cool, dry  fall weather in Central Pennsylvania lacks some of the warmth and humidity necessary to get the yeast properly activated. The batch using only the tapioca flour feels more like a thick glue than a dough. I'm tempted to try using some of the Brazilian mandioca flour I used last week for the cheese bread. . . [NOTE: both of these attempts were also unsuccessful]. 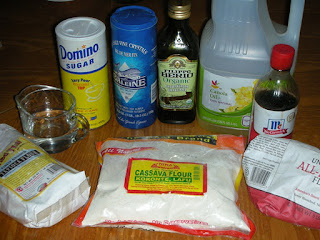 At any rate, here's  Anne's recipe:
Mikaté
(Makes about a dozen) [NOTE: She says to refrigerate this; I'm not sure why]
1 cup all-purpose flour (again, I'm trying half wheat and half cassava; and all cassava versions)
1/3 cup sugar
1/2 teaspoon salt
about 3/4 t of active yeast
1 little (1/4 t) pure vanilla (for her tripled recipe she also recommends instead substituting 1/4 pkg of dried powdered vanilla pudding--this recipe would be 1/3 of 1/4 or 1/12 of a pkg. I used the vanilla).
Fill a deep skillet about 3/4 full with 6 - 8 cups oil (she recommended 1/4 olive oil and 3/4 vegetable oil).
Heat the oil and test by dropping in a glob of batter (NOTE: if the batter falls to the bottom and stays there, it's too cool; if it immediately bounces and up browns, it's too hot).
When the oil is hot, take a tablespoon and scoop up batter, then attempt to drop into batter as balls (like US donut holes). I had a LOT of trouble with my kokonte batter--it was too soft and kept wanting to spread (like PA Dutch funel cakes). I needed to add more flour to thicken it, and they still would not hold a round shape.

Fill the pan with batter, let brown on one side and then turn them over to brown on the other side.
Drain on paper towels and serve.
As I mentioned, I've not yet mastered the art of making mikaté, and may need to find someone to help me perfect the technique. Any of you readers have any advice?
P.S. Tuesday, Nov. 8: After 4 attempts at making these with cassava flour/starch, I can say that I failed. Mine were essentially inedible.  I'm guessing it has to do with the cassava flour I used. Certainly the starch became like glue, and did not form the spongy dough that I expected. However, I can see that using wheat flour would likely be totally fine. 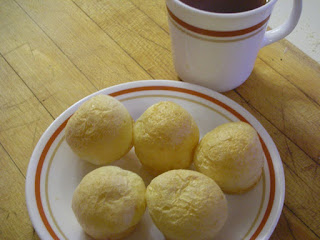 As I mentioned in my last post, Brazil has a popular snack and breakfast food called
pão de queijo, a kind of chewy on the inside, crisp on the outside (but not too crisp) muffin/popover/roll/bread made from cassava (mandioca) flour, egg, milk, oil, salt, and cheese. They can be made tiny or large, depending on one's preference. Traditionally pão de queijo is a dough that is kneaded and individual rolls are formed by hand. However, recent adaptations have resulted in a faster, easier version that can be made in muffin tins. That's the first one I tried. Just like adding more liquid to a biscuit dough means you can make drop biscuits, adding extra liquid to the batter means that instead of cooking the  pão de queijo on flat pans like cookie sheets, you can simply pour the batter into greased muffin tins. 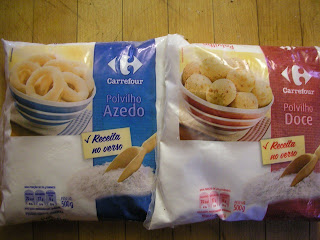 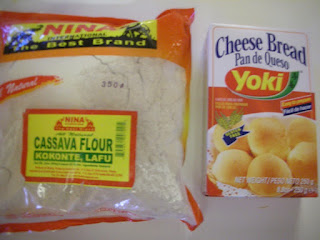 I decided for my first effort to use the 2 types of cassava flour that are available in Brazil: polvilho doce and polvilho azedo--sweet and sour as I explained previously. (By the way, a big "thank you" to my husband and our Brazilian friends Virginia and Renato for going to the store for the flour the day he left Brazil.) Soon I'll experiment with some Ghanaian kokonte (cassava flour). Incidentally, Brazilians have found a way to package and export their bread as a mix. I'll try that, too, but I'm afraid it might be like eating instant mashed potatoes: better than nothing, but nothing like the real thing.
First I assembled the utensils: 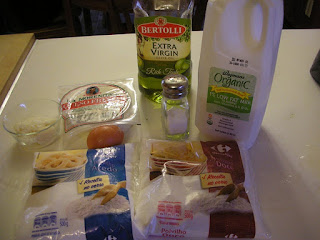 Add to the blender container: 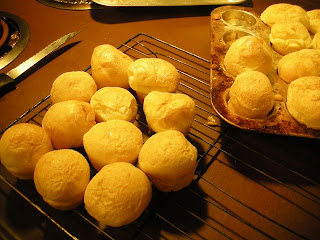 Pão de queijo is best eaten straight from the oven while still warm. As it cools it get tougher. My husband declared these delicious, and amazingly the 2 dozen quickly disappeared with cups of tea (it would be coffee in Brazil).


I'm eager to try making these with kokonte. I understand that in parts of South America (Colombia?) the cassava flour is supplemented with corn flour. In Ghana other seasoning, like cinnamon or herbs, can be added.

Can't you imagine how delicious the possibilities are? It troubles me that in much of Africa it seems wheat flour is assumed to be THE ingredient for bread-making. In Brazil, people can cut the larger-sized  pão de queijo  and make them into sandwiches, especially filling them with sweet fruit-based fillings. My husband added an African touch by eating his with peanuts and hot sauce! 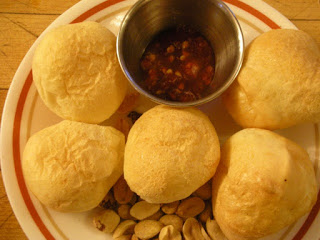 Back from Brazil: Moquecas to Mandioca 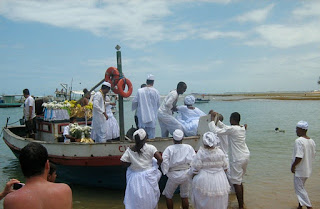 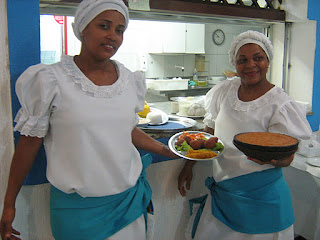 I returned from Brazil a week ago. We spent most of our time in the Central West region (Salvador in Bahia and Fortaleza in Cear restaurant in Salvador (thank you to Luciene Guirra and Josi Roberto). Incidentally, the history of Yemanj