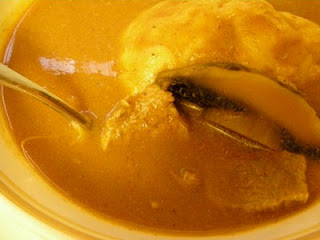 I was wondering what to cook for dinner last night that would be fun, healthy, simple, and delicious, when I realized I had lamb shoulder (on sale the week after Easter), portabella mushrooms, zucchini squash, jalapeno peppers and eggplant all on hand. Plus, I always have tomato paste/sauce/canned tomatoes, garlic, onions, salt, dried red pepper and fresh ginger in the house. 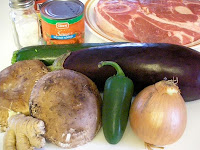 Voila! Everything I needed for a wonderful “light soup.” That’s the English name in Ghana for a light stock-based soup, named that long before the West started talking about “light” foods. A light soup can be contrasted with heavier “groundnut” (peanut) or palmnut (palmfruit pulp-based) soups. Light soups have infinite variations, and are easy to adjust according to what you have on hand: but remember to include onion, pepper and tomato!
Anyhow, here are the proportions and ingredients I used:
1 3/4  pounds of lamb round shoulder chops (mine had bones), fat trimmed and cut into chunks
6 cups of water
1 1/2  teaspoons salt (or to taste)
1 cup chopped onion (1 large)
1 cup tomato sauce (1 small can)
a few spoonfuls of tomato paste (optional)
6-8 ounces of eggplant, peeled and cut into quarters (a whole small Japanese eggplant, or a third to a half of a larger regular eggplant)
one medium zucchini (about 4 ounces), cut in half
1 small jalapeno or other chili pepper (or use dried red pepper to taste, if desired, beginning with 1/8 teaspoon). If you like things spicy, use the whole pepper; if not, cut it in half and carefully remove the seeds and membranes first
about 6 ounces of fresh mushrooms (I had portabella on hand, but any mushroom will work)
(optional seasonings: a 1-2 teaspoons fresh grated ginger, a couple of tablespoons chopped onions, 3 peeled, crushed cloves of garlic, a sprinkling of ground red pepper)
Trim the fat from the lamb, and cut it into chunks. Put the meant in a soup pot with a cup of water. The next step is optional, but I almost always season and “steam” my meat before making the soup, so if you want to follow tradition: on top of the meat, sprinkle a couple of tablespoons of fresh, peeled, grated ginger, a few cloves of peeled, crushed garlic, a couple tablespoons of chopped or minced onion, and sprinkling of dried ground red pepper and salt or seasoned salt. Cover the pot, bring it to a boil, then lower the heat and let it simmer while you prepare the other ingredients.
Chop the onion. Open the can of tomato sauce (and paste, if you want to use it). Rinse and trim the zucchini and  cut it in half. Peel the eggplant and cut it into quarters. Prepare the mushrooms (rinse, wipe dry with a paper towel, and slice in thick slices, or, if they’re small leave them whole or cut them in half or quarters).
Set the mushrooms aside to add near the end.
Add the other vegetables, except the mushrooms, to the pot, along with another 5 cups of water. Add the salt, stir well, bring it back to a boil, then let it simmer, covered, until the vegetables soften (about 10-15 minutes). 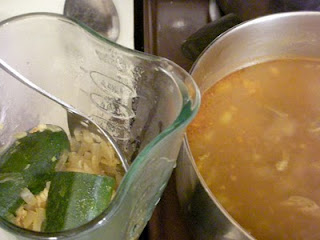 Use a slotted spoon to remove the eggplant, pepper, zucchini (and I also usually spoon out some of the chopped onion floating in the soup) into a blender or food processor container. You may need to add a little broth from the pot, or to do this in 2 batches. Blend the vegetables until they are smooth and return them to the soup.
Add the mushroom slices (at this point I tasted the soup and decided it needed more tomato flavor, so spooned in a couple of tablespoons of tomato paste), stir, cover, and allow the flavors to blend for another 10-15 minutes. Before serving, adjust the seasonings to taste, and skim any fat from the lamb that may have risen to the surface.
While the soup finished simmering I made some fufu to go along with it, but you could serve it with rice, or bread, or whatever you like. If you want to try an American version of microwave fufu using easily available ingredients, you might like to check out BETUMI's YouTube video. However, eating fufu is a slightly acquired taste. Also, pieces of fufu are swallowed whole without chewing them, so you might try the soup first with bread or rice or rice balls (omo tuo). This recipe makes a fairly thick soup: you can adjust or omit the eggplant, zucchini, etc. to suit your tastes, or cube the vegetables instead of blending them. (With American children I generally find it's better to grind the vegetables if they're not used to eggplant and zucchini).   Ghanaian women overseas also tend to be innovative cooks. It was a Ghanaian neighbor in Pennsylvania who first shared with me her discovery that pureed zucchini makes a nice complement to (or substitute for) Ghana’s “garden eggs” in light soup. Similarly, my friend and colleague in Canada, shared that her discovery that pureed carrots are a fabulous addition to chicken light soup, and my sister-in-law blended red bell peppers to get the color she wanted in her soups. This recipe serves 4 to 5 people.
Bon appétit.
Posted by Fran at 10:08 AM 2 comments: 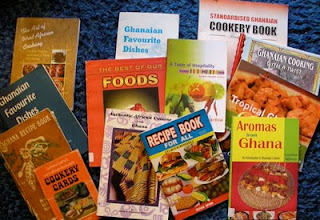 March was a busy month and I've not really stopped to update folks on my recent and upcoming activities.
Posted by Fran at 11:46 AM No comments: