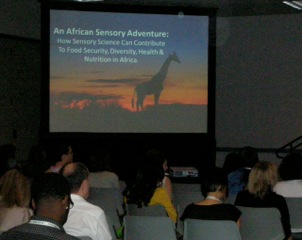 I'm back from Las Vegas, Nevada, where I joined members of the Institute of  Food Technologists at their annual conference, IFT12, on a panel about African food. The organizers didn't mind that I was not a food scientist--they wanted someone who could celebrate African cuisines and talk about textures and tastes and processing and flavor principles from the culinary angle. My greatest thrill came from the numerous Africans attending the conference 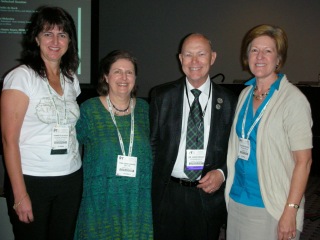 and food expo who were delighted to finally have someone talking about their food in a positive way! It was also wonderful to meet colleagues from the University of Ghana at the poster session (like Prof. Esther Sekyi-Dawson and Dr. Agnes Budu), and make numerous new friends, especially Prof. Riette deKock from the University of Pretoria who first suggested the panel.  Since we weren't able to arrange a tasting, I handed out samples of (dry) gari and recipes, and passed around an asanka (a ridged clay grinding bowl) and herbs and seasonings as I bounded through dozens of slides in 25 minutes. ("That was . . . fast," concluded organizer Chris Findlay with a smile.) 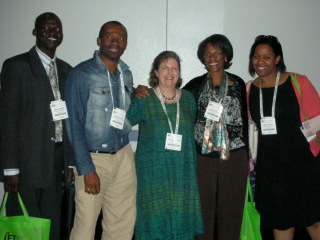 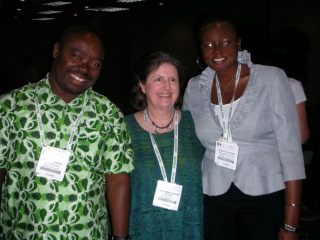 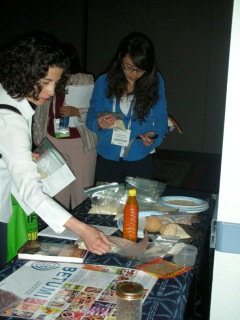 With about 18,000 attendees, I believe, there were hundreds (thousands?) of exhibitors at the Food Expo. However, except for many exhibitors whose wares included rooibos tea or hoodia, and those who imported cocoa from West Africa, I sought in vain for an African presence in the exhibit hall. Perhaps I missed someone, but I did finally find one company, Tiger Botanicals, that sells extracts from baobab fruit pulp and also African bush mango (Irvingia gabonesis). They began as a tea company (Herbal Teas International), with products like rooibos tea, but changed their name when they began expanding to other African ingredients. I'd love to experiment with baobab in cooking, and Tiger Botanicals has promised to send me some samples. Also, Prof. Sekyi-Dawson has promised to try and get me some kpakpo shito seeds to grow. Does anyone know how I could obtain some unhulled egusi (agushi) seeds? 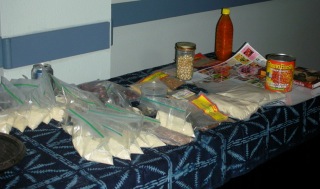 I'm still processing the event, but learned a fabulous new word there: "culinology." It refers to "the blending of culinary arts and the science of food" and is the name of the journal of the Research Chefs Association.
Posted by Fran at 5:03 PM 2 comments: