In March I posted the description of the  3-credit African Studies class on Sub-Saharan African food culture I'm teaching this fall (2012) at the University Park campus of the Pennsylvania State University. Here's a brief trailer with more information. If you're part of the Penn State community, please help spread the word.

Also, if you know of any similar courses or resources you recommend, I'd truly love to know about them 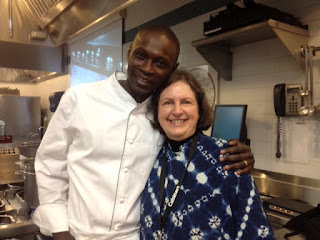 A high point for me at this year's
IACP conference in NYC was attending a session at The International Culinary Center  led by Senegalese Pierre Thiam, the fabulous chef/owner of Le Grand-Dakar, and author of Yolele! Recipes from the Heart of Senegal.
Pierre had obvious mastery of his subject, a refreshingly calm and humble demeanor, and kept us all entranced with stories of Senegalese culture and cuisine, all the while preparing and offering samples of several delicious recipes using the  amazing tiny millet grain fonio, one of the so-called "lost crops of Africa." 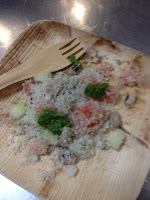 I have fond memories of time spent inTamale in northern Ghana eating a light, delicious breakfast porridge made from fonio, and was happy a few years ago to learn that Sanoussi Diakité, a Senegalese mechanical engineer, had perfected a mechanical husking machine for  processing of the tiny grain.
There was much enthusiasm at the IACP conference for discovering new grains, and the cookbook that won the Julia Child award was Maria Speck's Ancient Grains for Modern Meals, published by  Ten Speed Press. However, her Mediterranean whole grain focus is on ingredients like barley, farro, kamut, polenta and wheat berries.
One Swiss conference attender enthused to me later that Thiam's session was the best one she had attended so far (this was 4 days into a 5-day conference!) I, too, found it to be quite useful and enjoyable, even though I had to sneak out before the end to set up for the bloggers fair.
I'll post a fonio recipe of my own soon. More to come, too, about the food blogger fair and with lunch with Jessica Harris at Marcus Samuelsson's Red Rooster.