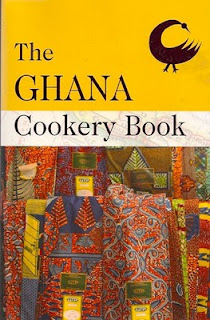 Here are the 3 latest additions, all paperbacks,  to the Africa Cookbook Project, which I launched semi-officially in 2007. I'm still collecting cookbooks. Two of the cookbooks are Ghanaian and one is Kenyan.
The Ghana Cookery Book was originally compiled by the Gold Coast Branch of the British Red Cross Society and published in 1933 as The Cold Coast Cookery Book. In 2007, David Saffery (who seems to have made a career out of republishing old African cookbooks) reprinted it via the "Jeppestown Press" in London, dressed it up with a glossy cover of Ghanaian GTP textiles, and used illustrations from both the original book and the 1922 South and East African Year Book). As would be expected, it is basically a "Western" cookbook, whose (unedited) recipes were contributed by residents in Ghana "upon whom the sole condition was imposed that all the ingredients of every recipe should be easily obtainable in the Gold Coast." This includes things like canned asparagus, cheese, and strawberry jam ;-)  While most of the recipes are quite foreign to Ghana, several--especially those provided by Sister Antonia (Keta) and Sister Angele (Cape Coast)-- do include some indigenous dishes (e.g., palmnut soups, tigernut cream, garden egg and groundnut soups, okra stew). It's an important historical addition to my collection. 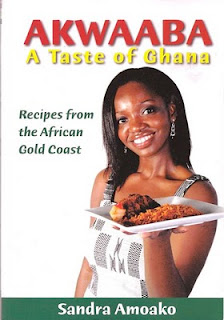 At the other end of the spectrum is another recently self-published Ghanaian cookbook, Akwaaba, A Taste of Ghana (Recipes from the African Gold Coast) by Sandra Amoako, a young  woman from Accra who attended Bucknell University in Pennsylvania and is part of a growing group of Ghanaians who are proud of their culinary heritage and want to introduce it to Western audiences. She has included a helpful index in the book. It covers the same general territory (about 50 recipes and variations) as other books, includes some time-saving adaptations, and is a welcome addition to the introductory cookbooks on Ghanaian cuisine. 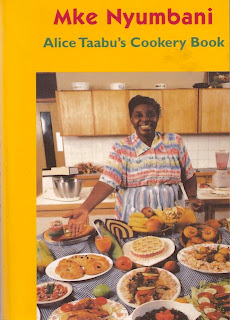 From Kenway Publications in Nairobi/Kampala/Dar es Salaam (a subsidiary of East African Educational Publishers Ltd.) comes a classic cookbook based on her long-running  popular television cooking shows Mke Nyumbani: Alice Taabu's Cookery Book,  and first published in 2001. It is carefully illustrated with black and white drawings, and is clearly intended for a Kenyan audience.
Posted by Fran at 11:00 AM 10 comments: 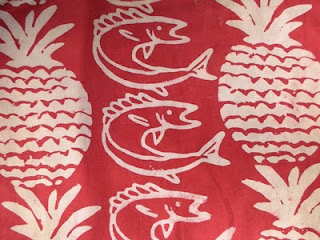 As I prepare to travel to Ghana, one of my main goals while there will be to refine a nutritional breakdown of the classic recipes in the cookbook Barbara Baeta and I are writing. A Penn State undergraduate student, Katie Cochrane, see Eat My Work, is helping with the nutritional analysis. Katie is majoring in both food science and integrative arts, and will assist also in doing some interviews and  in developing a collection of food-themed Ghanaian textile images, such as as the design I commissioned on the right, or this classic VLISCO wax print rendition of yam leaves. 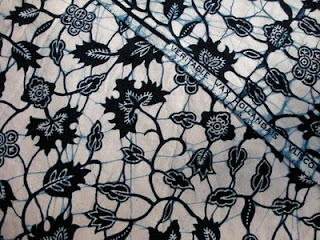 Speaking of nutrition and the classic West African diet, you might like to check out  a recent article on the subject at The Ismaili Nutrition Center that makes suggestions on how to monitor and  modify intake of salt and fats, and also how to adjust cooking techniques for better health.
Posted by Fran at 1:41 PM 2 comments:

Ready, set. . . . preparing to leave for Ghana and Nigeria 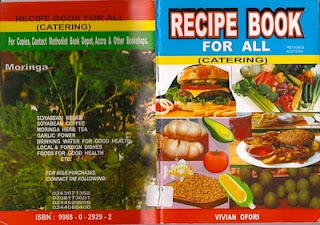 You'll note that there were few posts in April. Things have been heating up here with preparations to travel to Ghana and Nigeria for the summer. Last week I also gave a presentation at Penn State on Ghanaian cookbooks, and served Ghanaian snacks (if you're interested in viewing the powerpoint, my slides are up at google doc http://bit.ly/cFZTUX )

A week earlier, I hosted a Ghanaian dinner for a visiting Korean distinguished professor and his Vietnamese student. Lots of cooking: this week I'll prepare a catered (African) luncheon for a symposium on May 6. Plus I've been hustling funds for an undergraduate assistant to travel with me to Ghana for 2 weeks, and generally dealing with a long list of things to do: ordering equipment, arranging immunizations, contacting people and setting up meetings in Ghana, etc.

It's likely that I'll be pretty quiet this summer as far as posting on betumiblog. My main goal is to meet with Barbara Baeta and work as hard as possible in getting the Ghanaian cookbook into shape for publication--while my writing and credentials are respected, we've yet to locate a publisher willing to publish a lavishly illustrated African cookbook on a single country ("no U.S. market" is the common explanation). If any of you have suggestions, please let me know. Self-publication is a last, last resort.

Incidentally, Katie Cochrane, who will accompany me for part of the time in Ghana, noted in the blog she's just begun for this project a recent positive New York Times restaurant review of a new Ghanaian restaurant,  Papaye, in New York City.
Posted by Fran at 7:22 PM 4 comments: