News flash--our forthcoming book is now listed on Amazon! The cover features some of my Ghana photography. Still lots of editing and finalizing, but please stay tuned. It should be out in time for your holiday giving next October. Kudos to Hippocrene for their lovely design. 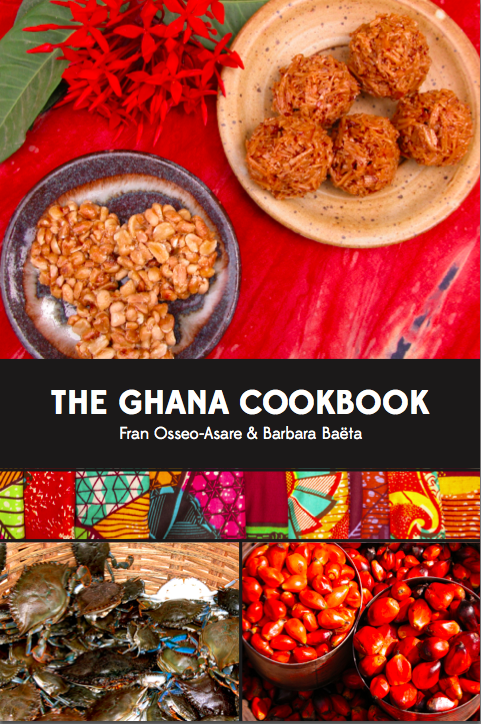 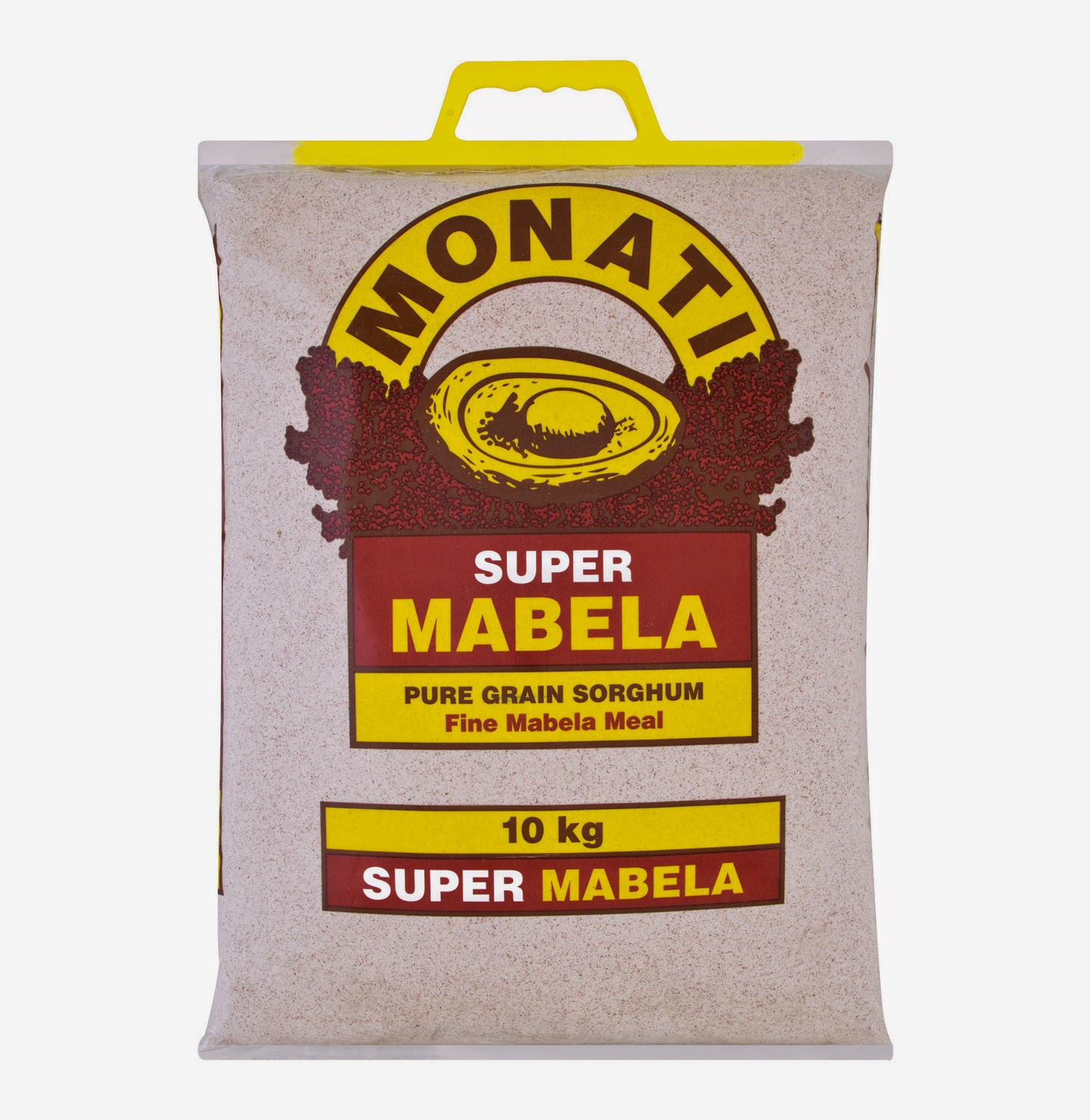 Wheat is expensive and often imported into sub-Saharan African countries, where it is
generally the preferred ingredient in baked or steamed breads. It is often in competition with other more traditional ingredients, such as sorghum and maize.

In 2014 I had the privilege of participating in the thesis defense of another young African woman scholar, Pulane Nkhabutlane, who set out to investigate and document  the culinary practices and consumer preferences regarding traditional Basotho bread. She  sampled villages in 5 rural districts in Lesotho, a small country in southern Africa completely embedded within S. Africa.


A consumer science doctoral student at the University of Pretoria, Dr. Nkhabutlane's pioneering doctoral research was, like Rose Omari's, by necessity largely exploratory and descriptive.  There were 3 main phases of her research:
The thesis was another fascinating contribution to filling in the hole in contemporary sub-Saharan African culinary research. It also suggests a number of policy recommendations, such as campaigns to improve nutrition and food security and a greater appreciation of the strengths of the culinary heritage of sub-Saharan Africa.

It is exciting to observe a new generation of African scholars taking hold of their own research agendas. It also gladdens my heart that there is a generation of African fathers and husbands who are willing to support their wives to enable them to make contributions to the development of their continent, even at a personal cost to themselves.


The full title of Dr. Nkhabutlane's thesis is: "An Investigation of Basotho Culinary Practices and Consumer Acceptance of Basotho Traditional Bread."

Some of her work has already been published: P. Nkhabutlane, G. E. du Rand, and H. L, de Kock, "Quality characterization of wheat, maize and sorghum steamed breads from Lesotho" Journal of the Science of Food and Agriculture, Volume 94, Issue 10, pages 2104–2117, August 2014. 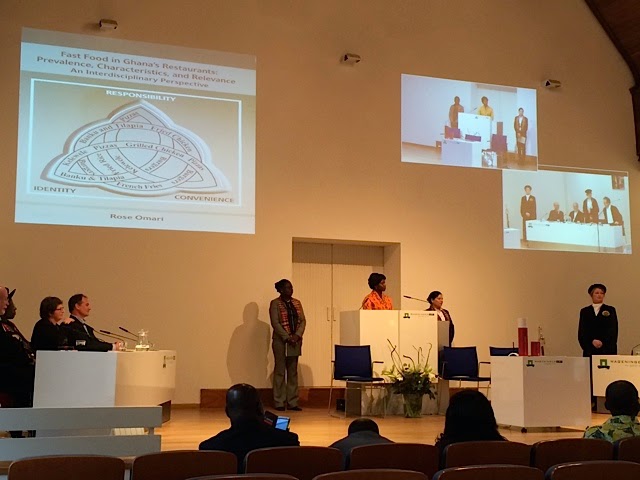 As 2014 draws to a close, I have returned to my desk in Pennsylvania, USA, after several
months away. A recent trip was to the Netherlands, specifically to Wageningen University, where I was pleased to be on the examining committee during Rose Omari's doctoral defense. I first met Dr. Omari when she was a student and working at the Science and Technology Policy Research Institute in Accra during a research trip to Ghana in 2010, and it is encouraging to see another young African scholar tackling some of the gaps in African culinary research. Originally trained as a food scientist, Dr. Omari transitioned into the social sciences with her doctoral research. 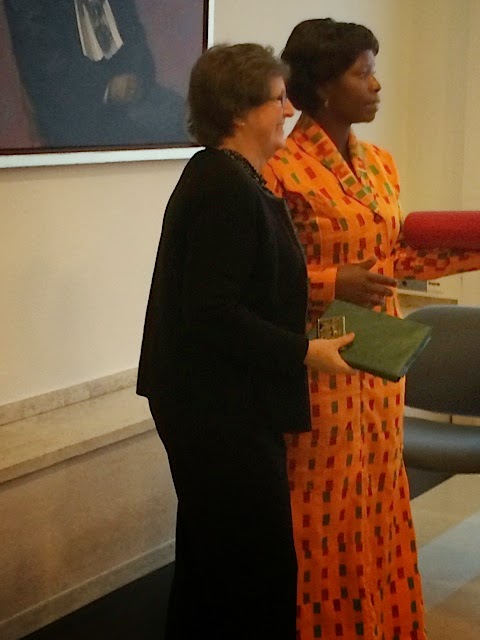 Intrigued by the rapid emergence of an urban social phenomenon in Ghana, the "fast-food restaurant," she wanted to use the Accra Metropolitan Area to answer basic what, why, where and when questions, and to try to make sense of it. She wanted to use a Ghanaian perspective rather than simply adopt Western models. Prof. Dr. E. O. Sakyi-Dawson, from the University of Ghana, was another of her examiners. The research is fascinating and likely to inspire further efforts. Besides doing a fine job of description, she sought to cast a wide interdisciplinary net to analyze the phenomenon considering the interacting and contradictory dimensions of social identity,  convenience, and sense of consumer responsibility.

The thesis title is: Fast Food in Ghana's Restaurants: Prevalence, Characteristics, and Relevance--An Interdisciplinary Perspective. One paper rising from the research has already been published, and several more are already submitted/accepted:

Omari R., Essegbey G. and Ruivenkamp G. (2014) Barriers to the use of locally produced food products in Ghanaian restaurants: Opportunities for investments [Accepted for publication in Journal of Scientific Research and Reports]

Dr. Omari is married and has children. From personal experience I know that a woman's academic road in that case can be a long and challenging one, requiring intense commitment and persistence, and the sustained love and support of one's spouse, family, and friends. Clearly, Dr. Omari received that. Well done! 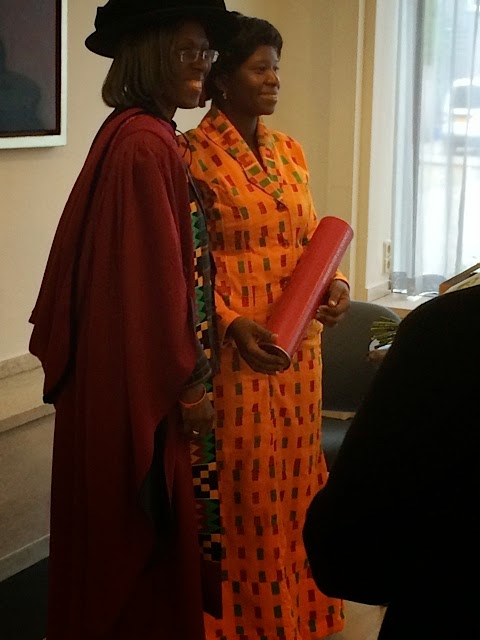