I had a request today for information on what is described as a millet pancake, probably a Hausa food. I'm not familiar with it. Can anyone help? 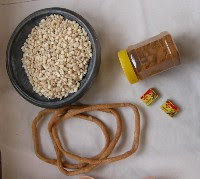 "Kuli-kuli is calling me to come and buy"


Today while looking through Mother Africa's Table: A Collection of West African and African American Recipes and Cultural Traditions, compiled by Cassandra Hughes Webster for The National Council of Negro Women, Inc., in 1998 and thinking how many Ghanaian influcences found their way into that book, I came across a recipe for a version of kuli-kuli (fried peanut cakes).

I was instantly transported back to Bawku in northern Ghana, and remembered sitting in a courtyard one morning learning how to make the peanut-based snack food kuli-kuli as part of my quest to develop a recipe for yagi, or tankora, powder, the spicy dry rub for Ghanaian chichinga (kebabs).

According to Elizabeth Jackson, in her excellent 1999 cookbook, South of the Sahara: Traditional Cooking from the Lands of West Africa, yagi is a Hausa word for a mixture of spices dating back to a 14th century ruler in Kano nicknamed Yaji, "the hot-tempered one," and composed of up to seven dried, powdered spices (e.g., red pepper, ginger, salt). In Ghana it usually also includes groundnut powder and a fine cornmeal (Incidentally, I promise that when Barbara Baeta and I eventually get our regional Ghanaian cookbook out, a yagi recipe will be there, along with the tea bread and sugar bread recipes people keep asking about).

The other thing I remembered about kuli-kuli was that my host in Bawku, the gracious Dorcas Nimbo, kindly agreed to let me record her singing the popular children's song about it. To hear her, click here, or subscribe to the BETUMI podcasts (go to ITunes or another podcast directory to sign up). 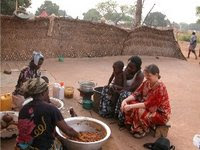 I'm also grateful to Mohammed-Nadhir Ibn Muntaka for helping me refine the processing steps for kuli-kuli:
1. Making the groundnut paste, or peanut butter (called luquie in Hausa) by shelling, roasting and grinding the nuts.
2. Removing excess peanut oil by kneading the paste to make tunkusa.
3. Forming small balls and frying them again to remove more oil (though Mohammed said his mother boiled the balls for the same reason, and the oil rose to the top).
4. After deepfrying the balls, pounding them in a mortar with a pestle to make another paste, which is seasoned with salt and rolled into thinner-than-pencil ropes that are joined together to form irregular circles, and then deepfried again.
5. The final shapes are called kuli-kuli, though there are other versions, such as balls, also called by the name. 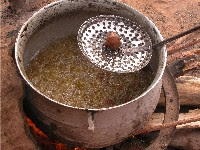 Kuli-kuli can be eaten plain as a snack, or broken and mixed into millet, or corn, or corn and millet porridges (kokoo). They are also crumbled and sprinkled onto other foods.

The couple of times I've tried making kuli-kuli, mine have disintegrated (the women in Ghana really know how to compress those balls), but I plan to keep working on perfecting the process. In the meantime, if you're lucky enough to get to Ghana or Nigeria, don't leave the kuli-kuli to the children! 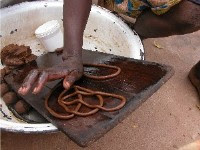