History of Entertaining in Sub-Saharan Africa 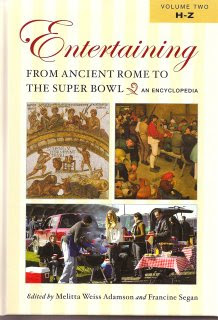 Greenwood Press has just published (2008) an eclectic 2-volume encyclopedia on the history of dining and entertaining called Entertaining: From Ancient Rome to the Super Bowl. I'm happy to announce that I was invited to write a lengthy entry for Sub-Saharan Africa in it.

That section runs 10 pages (vol. 2, pp. 468-478), and begins with a quote from Chinua Achebe's classic novel Things Fall Apart, where one of the oldest members of an Ibo extended family proclaims:

"A man who calls his kinsmen to a feast does not do so to save them from starving. They all have food in their own homes. When we gather together in the moonlit village ground it is not because of the moon. Every man can see it in his own compound. We come together because it is good for kinsmen to do so."

I'm glad I was able contribute to the project, and am proud that in this encyclopedia Africa is credited alongside others at the global table. Incidentally, I do note that Achebe could have said "kinswomen" as well. 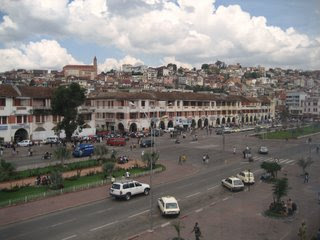 My daughter Abena, a (an) historian of science at the University of California in Berkeley, is currently in Madagascar doing research. She sent me a link to an interesting page (in English) on Virtual Tourist about Malagasy cuisine by Norali, who lives in Antananarivo, where Abena is staying. Check it out!

Abena is having trouble finding good food (as usual the hotels seem to favor pizza and other Western food). I'm hoping she'll connect with Friedrich Randriamiakatra, who also stays in that city. I look forward to the day I make it to Madagascar myself . . .

Diet, Diabetes and Health in Africa 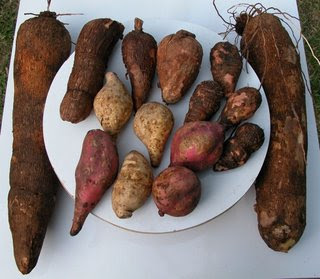 November is "Diabetes Month" and in recognition of "World Diabetes Day" (today, Nov. 14)," BBC Africa has been discussing the topic "Is diet the key to good health?" (in Africa) at their website and also on their program "Have your say." Diabetes is, as is true throughout the world, rapidly on the rise in Africa. Yesterday (Nov. 13), I joined the BBC's hour-long discussion program, where I mentioned the role of aggressive multinational advertising in influencing the tastes and choices of Africans (especially of imported foods), the role of convenience and time constraints on eating habits, and traditional-"modern" and rural-urban differences in what people eat. Also, you can hear interviews with people ordering rice and a beef stir-fry and fried chicken and French fries ("chips" from potatoes) in a restaurant in Accra, or a rural family from Malawi eating nshima (made from corn flour) and a fish relish, as well as practical advice on diet and health from Dr. Ndawula in Kampala, Uganda, and the experiences of 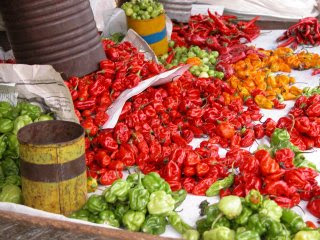 Just as a couple of minor comments: the husband in Malawi, describing their meal said "but, unfortunately we don't have any vegetables" with the nshima. He knew the meal contained protein (the fish) and carbohydrates (corn). However, later he mentioned the sauce "to make it more appetizing" included onions and tomatoes. Onions and tomatoes qualify as vegetables. Also, as a minor point of clarification: one of the commentators mentioned that ugali, sadza, and nisma or nshima are all basically the same, and banku is the version in Ghana. It is my understanding that banku is the only one of those that is made from fermented corn dough, which is a notable distinction between them.

The BBC program touches on many important points: the role of exercise and physical activity, controlling portion sizes, advantages and disadvantages of processed and unprocessed foods, different effects of different types of cooking techniques (frying, boiling, steaming, etc.), role of convenience and cost in choosing foods, importance of fruits, vegetables, and drinking water, different types of protein resources. . .This is a very timely and urgent topic throughout Africa. I recommend checking these BBC resources out.

I wish I'd had time to talk about the positive traditional cultural image in Western Africa of the literally "big man" or "big woman," a nurturing, generous, successful, healthy, wealthy person, vs. the image of a "skinny" person as stingy, poor, and likely unhealthy. To be "fat" has historically been a good thing. That image is changing, but it still had a role in the fight against diabetes.
Posted by Fran at 10:45 AM 11 comments: 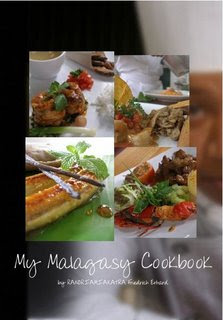 In August, 2007, Co-TED Fellow, Friedrich Erhard Randriamiakatra, a cooking teacher at the National Institute of Tourism and Hotel Business (NITH) in Madagascar (the 4th largest island in the world!) donated a book to the Africa Cookbook Project, Ma Cuisine malgache (see the October 12, 2007 posting). Since he's been unable to find an English cookbook on Malagasy cuisine with photos, he's written a brief, illustrated introduction to Malagasy cooking that I'm adding to the data base. At its heart his booklet is a description, recipes, and photos for romazava (or ro mazava), generally considered the "national dish" of Madagascar. Friedrich explains that romazava means "clear broth" (in Ma Cuisine malgache it's also translated in French to pot au feu or bouillon clair. It may be made from a base of beef, chicken, shellfish or fish (another source says it may be a vegetarian base, too). The other essential ingredient is some kind of chopped leafy green. As Mr. Randriamiakatra explains, in Madagascar there are 3 kinds of leaves commonly used, known in Malagasy as anamalao (brèdes mafana),
anantsonga, and anandrano, and he says their scientific names are cresson du para, drede mafane spilanthes sp.; brassica chinensis; and cresson (watercress).

Actually, it appears that ro literally means "juice." He explains that ro matsatso (literally "tasteless soup") refers to green leaves boiled in water without any seasonings, even salt, though people sometimes add "bitter tomatoes" and tomatoes, and is used to moisten rice. Along with his recipe for chicken romazava, he includes accompaniments of chicken skewer with ginger and peanut butter sauce, rice, and tomato salad with dressing (rougail). He has illustrations of zebu, fish, and shrimp romazava--or is it romazavas? 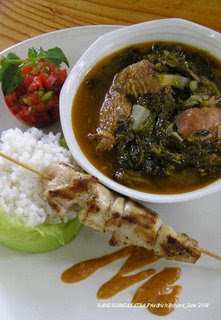 I'm thrilled about Friedrich's passion for his native cuisine, and his willingness to share, and hope to learn more from him in the future.