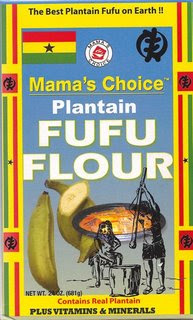 One of the ongoing dilemmas for those outside of Africa is how to reproduce "homestyle" flavor. Last February I mentioned Elisha P. Renne's article in American Anthropologist: "Mass Producing Food Traditions for West Africans Abroad (Dec. 2007, Vol 109, Issue 4, pp 616-625).

For many Ghanaians, soup and fufu is a classic meal in their culinary repertoire. In April, 2006 I posted a blog about and interview with a Ghanaian chemical engineer living in New Jersey, Dr. George (Yaw) Adusei. Dr. Adusei set out to develop a high quality fufu flour in the U.S., using plantain, cassava (manioc), and cocoyam (taro) imported from Ghana. I recently received several boxes of his improved fufu powder requesting me to taste test them and give him feedback.

He has, among other things, changed the design of his boxes and added vitamins and minerals to the plantain fufu flour. One of the things I like about Mama's Choice flour is that in Ghana there is often the issue of quality control. I trust that Dr. Adusei has had his nutritional facts tested by a reputable independent lab, and the portion sizes, calories, etc. make sense, which is not always true with the numbers on boxes from Ghana. Also, I know that he is working to limit and/or eliminate the use of preservatives in his flour.

I like the taste and texture of his product (second only to freshly pounded fufu), though it does seem that the plantain fufu may take a little more water and a few minutes longer in the microwave to cook than the previous brand I was using.

Mama's Choice is the new kid on the block. As a relatively new, small, independent company, it faces a huge challenge in developing its market share in a field currently dominated by a 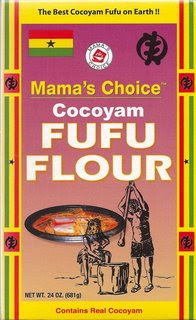 couple of well-known brands and distributors. I encourage you to check out Mama's Choice fufu if you see it in stores, or request that your suppliers order some and give it a chance. 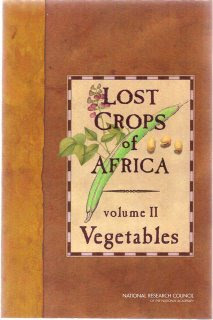 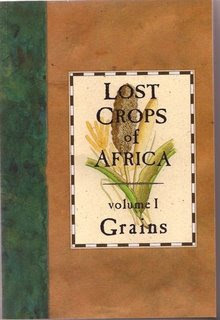 A comment posted recently by Gnu Guru reminded me that some of you may not be aware of the series currently being compiled by NAP, the National Academies Press, on what they somewhat misleadingly call the "Lost Crops of Africa." [To be fair, in the first volume--and others-- the authors clearly explain that " . . .most of the plants described are not truly lost. . .It is to the mainstream of international science and to people outside the rural regions that they are 'lost.' "] (p. xiii). While the books are quite expensive, they are very useful, and some of the information can be viewed online . 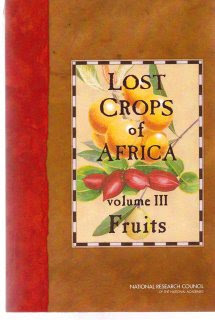 The "lost crops" series is a planned set of several volumes on traditional, often underutilized and appreciated Sub-Saharan African crops. The first volume, Grains, was published in 1996 and covered a dozen grains from African rice (Oryza glabberima), finger and pearl millets, to fonio, teff, and wild grains. The second, Vegetables, in 2006, featured 18 vegetables, like amaranth, egusi, enset, moringa, okra, and shea. The third volume, Fruits, came out in 2008, and covers a couple dozen fruit resources from baobab and kei apple, tamarind, horned melon and watermelon, to custard apples, sugarplums, ebony, and chocolate berries.

These books include a wealth of information, and are a cross between scholarly and popular reading. I find them invaluable, and appreciate both the detailed information, illustrations, and the names of experts from around the world. It appears that the series is evolving and changing over time. It was originally anticipated to include 6 volumes: the first on grains, the second on cultivated fruits and the third on wild fruits (they were combined in vol. III), a fourth on vegetables (currently volume II), and a fifth on legumes (these were included in the volume on vegetables), and a final volume on roots and tubers, featuring various yams, tiger nuts (chufa), Hausa and Sudan potatoes, and others.

I'm eager to see the final volume. I've no idea if it's almost completed, but in the first volume readers were encouraged to contact Noel D. Vietmeyer (nvietmey@nas.edu, FAX: 202-334-2660) if they wished to contribute to future volumes (in this case, the volume on roots and tubers), with information about the crop they wished to write about, and the editors especially appealed for photographs.
Posted by Fran at 11:09 AM 2 comments: