Touch of Africa; Spring Class on African Food and Culture 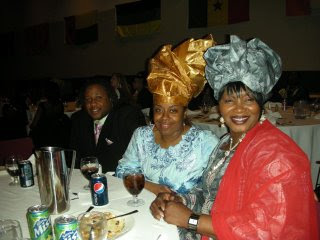 It's been hectic for me lately. Last Saturday night was Penn State's annual Touch of Africa celebration sponsored by the African Students' Association. As usual, it was a sold-out event (500 tickets) and a cultural extravaganza that gave the students and the community an opportunity to taste unfamiliar foods and experience the music, fashion, story-telling and energy of Africa, largely normally unavailable to central Pennsylvanians. I was brought in late in the game to oversee the preparation of the food with the The Penn Stater's professional cooking staff and some student volunteers. I don't generally do quantity cooking, so it was a challenge, but the team managed to pull it off with help from The Penn Stater's chef Ken Stout and his staff. A few (very few--I was too busy to take pictures) photos from the event are up on my BETUMI account on flickr. The menu included several West African dishes, representing the heavily West African ASA membership (efo stew with greens and beef and smoked fish and smoked ground shrimp and palm oil), egusi (a.k.a agushi, 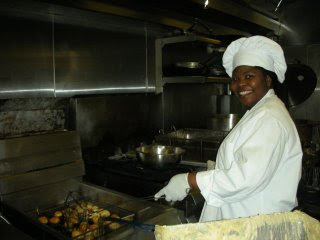 a fabulous melon seed and one of the so-called "lost crops of Africa") soup, puff puff (a Nigerian doughnut), chicken jollof rice, fried ripe plantains, hot and mild versions of 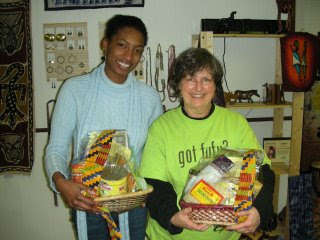 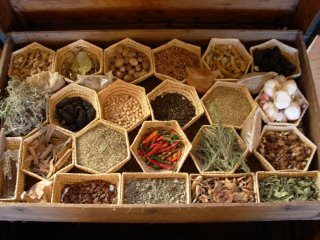 Sore Shields of The African Market and I coordinated a silent auction to raise money for 2 charities in Africa, and Kunmi Oluleye of Flavors of Africa generously donated copies of her cooking dvd of Nigerian, Kenyan, and South African cooking (first in a series of 17 planned). Thank you to everyone who helped and bid on the items.

Now, I need to get ready to teach a five-week African cooking (and culture) course beginning March 18. . . Never a dull moment.
Posted by Fran at 5:48 PM

I just noticed this blog posting from Feb. 27 on "Kudos for African Eats in Fort Blog" on the clinton hill blog (http://www.clintonhillblog.com/2009/02/27/kudos-for-african-eats-in-fort-greene/

I recently came accross your blog and have been reading along. I thought I would leave my first comment. I dont know what to say except that I have enjoyed reading. Nice blog. I will keep visiting this blog very often.

Don't know if you remember me but I'm Barbara from Obroni Observations blog. You left a comment for me about a year ago on my fufu post.

Anyway, I figured if anyone knew what this was really called or any info about it, you might. My kids have been bringing home this nut or maybe its a fruit from school. They call it yawye (sp?). It's about 1" long, with a velvet soft skin and you crack it open to eat the soft inside; there is also sometimes a seed.

The reason I'm trying to find out what it is is because my 8 year old was diagnosed with type 1 diabetes last year, and I'm guessing on carbs for her insulin.

Any thoughts what it could be? I've got a picture if that will help. My DH said that when he was growing up in Osu, the trees were all over the place, but they've been cut down (of course).

Hope you've been well. Thanks for your help. Oh, feel free to email me directly at barbslyz at yahoo dot com.

Barb:
Please send me the photo (fran@betumi.com). I'll check around and see what I can learn.If anyone out there can help, please post information here.

Very informative and impressive post you have written, this is quite interesting and i have went through it completely, an upgraded information is shared, keep sharing such valuable information. African Restaurants in Northampton UK