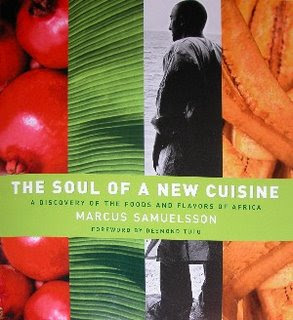 Sub-Saharan African Cuisine in the media and the mind

How do people in the U.S. and Canada view sub-Saharan African cuisine? Do they even know it exists? I'm just back from Boston, MA and the annual conference of the ASFA/AFHVS (Assoc. for the Study of Food and Agriculture/Agriculture, Food, and Human Values Society) with my contribution towards answering that question. I shared results from my analysis of several recent years of the programs of 3 conferences I attend (in addition to ASFA/AFHVS conference, IACP conferences (Intl. Assoc. of Culinary Professionals), and an ASA, or African Studies Association conference). Also, a survey of dozens of issues of two popular culinary magazines, Gourmet and Saveur, shed further light on the subject of "western perceptions of sub-Saharan African cuisine."

I'll soon post my rough Powerpoint presentation at betumi.com for any who are curious for details and charts. However, to summarize:

* in 8 years of IACP meetings between 1997 and 2006, less than 1% (0.7%) were devoted wholly to Africa or an African country (only Jessica Harris and Fran Ossseo-Asare giving invited presentations),
* in 6 years of ASFA/AFHVS meetings between 2000 and 2006, only 4 papers of over 847 papers/posters. or less than 0.4%,were on African cuisine (2 of them given by Fran Osseo-Asare and the other 2 related to students discovering Somali and Ethiopian cuisine in the U.S., respectively). Overall, 1.8% of the papers were on food/Africa related topics (food insecurity, nutrition, development, imperialism, education, politics, etc.), but more on African food as problem that as cuisine.
* While searching through well over 100 pages of a pdf file of the 2004 program of the ASA I was unable to identify any papers about African cuisine where food was considered in its culinary sense (though one paper dealt with the novel Nervous Conditions, most likely with the issue of eating disorders).
* In 11 random issues of Gourmet between Feb. 2004 and Dec. 2005 there was one article on West African restaurants in the U.S., one brief travel article by Alexander McCall Smith on his trip to Botswana (not about the food), and a recommendation of a South African restaurant in Cape Town as one of the world's best.
* In 13 random issues of Saveur: Savor a world of authentic cuisine, between Dec. 2003 and May 2006, there were 2 articles devoted to African cuisine (1 article on coffee in Coche, Ethiopia (~3% of that month's issue), and 1 on Durban South Africa's ethnic Indian population (~2% of that month's issue), and 1 page of a 10-page article on peanuts considered Africa's contributions. There were a few other mentions of Africa, but of 1372 pages, but that was only about 6 pages, or ~0.4% of the total.

I have a group of friends that see the world cup games together since 1990. We are brazilians and we always do a dish of the country that is our competitor in the game. Now, Gana is the team! Very nice! An african country in the next fase!!!
But we have problems. What to cook? Please, help me with a receipt from Ghana culinary!
My email is nisia.werneck@gmail.com
Thanks a lot!

What a game! I can hardly wait to see Ghana and Brasil go face to face. What to cook? I'd suggest groundnut (peanut) soup with chicken and okra or groundnut stew. There are lots of recipes on the web. You could serve it as a soup with omo tuo (rice balls: just cook rice with a little extra water, mash it and form it into balls). If you make the stew, serve it over rice with condiments, like a curry (use chopped pineapple, tomatoes,peppers, grated fresh coconut, hard boiled eggs, bananas, sauteed onions, etc. I'd also recommend kelewele (spicy fried ripe plantain cubes). By the way, Ghana likely got its famous gari from freed slaves from Brasil returning to West Africa, so go ahead and sprinkle some farofa over the groundnut stew if you make it. Enjoy.
Fran OA