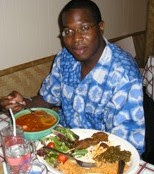 Koranteng's eclectic blog is always a stimulating read for anyone interested in things African and beyond--from technology to music to books to politics, and, yes, to food. He recently (Sunday, April 29) posted a mouth-watering, heart- and belly-warming review of a Cameroonian restaurant in Berkeley, A Taste of Africa. His posting reminded me of the wide regional variation among West African recipes with the same generic name, like "jollof rice." For a fascinating discussion about jollof rice, see the Congo Cookbook. I learned to make it in Ghana by first seasoning, then frying the chicken (or beef), and then the onion, tomatoes, and peppers. Over the years I learned to add fresh garlic, ginger, and curry powder, along with fresh or dried shrimp, and other vegetables, like peas and carrots or bell peppers. The final steps included adding tomato paste, and then the salt and rice and cooking it all together in a pot. I've since discovered my jollof is less mushy when I use fresh seeded tomatoes (rather than canned) and finish it up in the oven.

I've always called this classic West African dish reminiscent of Spanish rice a "one-pot," but apparently in Sierra Leone it also has a "two-pot" version where some of the sauce is prepared and served separately from the orange-red rice. Some say the dish originated from the Wolof people of Senegal, some of Gambia. Some say it should be bright red, others call for a toned-down orange. These days everybody seems wild to throw in a few seasoning cubes, but I continue to resist that trend.
Posted by Fran at 10:13 AM

Yum this looks good. What are the foods pictured in this buffet?