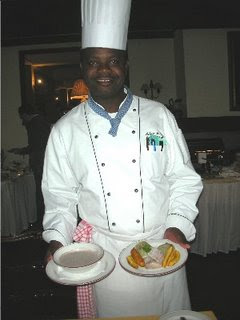 That first morning at TEDGLOBAL I went to breakfast at the lovely Serena Mountain Village resort where I was booked for the 4 days of the conference. Several safari tour groups stayed there during the same time. The breakfast buffet was long and plentiful, filled with fresh tropical fruits, cold cereal and granola, croissants, breads and pastries, oatmeal, and fruit juices. Pots of hot coffee and tea were brought to the tables.

I respectfully requested to speak to the sous chef, Alex Babu. When he came from the kitchen, I explained that this was my first visit to Tanzania, and how could I get a traditional Tanzanian breakfast. He looked puzzled, and asked what I meant. “I want to eat what you eat for breakfast,” I explained. His face brightened and he promised to do so the next morning. That day I was treated to the best breakfast I had at the conference: a mild, creamy sorghum porridge eaten with fresh whole-milk yoghurt and sugar, and in place of toast, freshly cooked root vegetables: ripe plantain spears, chunks of a wonderful white sweet potato, and what we call cocoyam (taro) in Ghana.

I suggested that perhaps they could try serving the porridge sometimes alongside the standard western fare. The following day I noticed sorghum porridge had replaced the oatmeal. It also appeared, alas, that I was the first person to help myself to it. However, later at the conference, an American woman who had overheard my conversation with Alex the day before, came up and thanked me for asking them to serve the porridge, which she had tried and found excellent.

En route to the conference, I spent a few days in Ghana with a Ghanaian friend who promptly offered me corn flakes, bread and tea my first morning at her home. When I asked about koko (millet/corn porridge), and koose (fried cowpea fritters), she promptly honored my request. The fresh millet porridge with a stunning bite of ginger, sugar, cloves and hwentia, mixed with a little evaporated milk, along with the satisfying koose (a.k.a. accra, akara, akla, bean balls, kosai, kose, and koosé) was my favorite breakfast from that trip. The next day I had a slightly fermented corn version that was also delightful. Served alongside the wonderful mangos in season (and I prefer the traditional small juicy yellow ones), I had to stop myself from doing what my family calls "the happy dance." 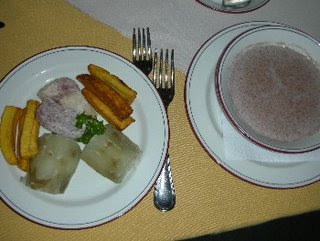 It still baffles me why Africans so often replace their hearty, tasty, and healthy traditional breakfast meals with “modern, western” choices. And it saddens me to find them catering to tourists with “continental” breakfasts when they have so much more to offer to non-Africans.

I’ll continue making observations from the conference (which, despite the triteness and inadequacy of the words), was truly astounding with its potential to empower people to change lives. I was amazed and overwhelmed to find such support and enthusiasm for my campaign to restore to the continent a proper respect for and appreciation of its culinary heritage and contributions. I owe Emeka Okafor and the sponsors of the TED fellowships a great debt I’ll do my best to repay.
Posted by Fran at 11:14 AM

Interesting blog.
On why Africans replace their breakfast's for Western type fare, perhaps it has to do with the convenience. The convenience of shaking cereal into a bowl and adding milk, rather than fermenting porridge days before and preparing it the next day. It has to do with the demands being made on African women (largely the ones responsible for preparing food for the family) to seek employment outside the house, which leaves little time for preparation of food that is labor intensive (however healthier it might be).