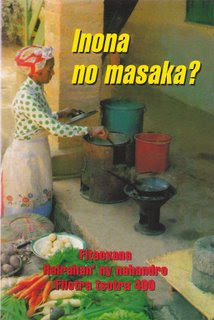 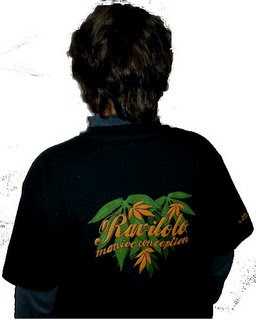 My daughter Abena delighted me in December with multiple Christmas gifts from Madagascar, including this t-shirt emblazoned with "Ravitoto manioc conception," which apparently is a favorite Malagasy dish--a meat stew (especially pork) made with manioc (cassava) greens.

Sorry, I've already eaten my fabulous dark chocolate (Robert Chocolat Noir Spécial) bar so I can't show that. It looks like it was made from chocolate from Madagascar in Antananarivo for "Chocolaterie Robert S. A." (South Africa?)

She also collected 5 new cookbooks for the Africa Cookbook Project on her travels. Two of them are totally in Malagasy (Inona no masaka? vols. 1 and 2), one is both in French and "Malgache" (Cuisine Malgache/Cuisine Creole), another is in French (La Cuisine de Madagascar), and the final one, a book on tropical fruits published in France (okay, so maybe it doesn't technically qualify for the Africa Cookbook Project), is also in French (Les Fruits Tropicaux). Now I'm struggling with online dictionaries to understand the Malagasy. Can anyone recommend an English-Malagasy dictionary to me? 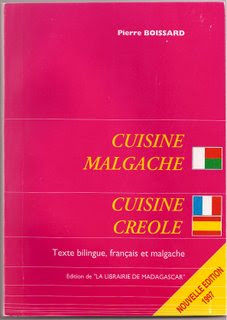 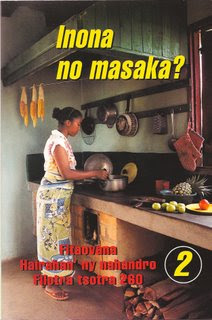 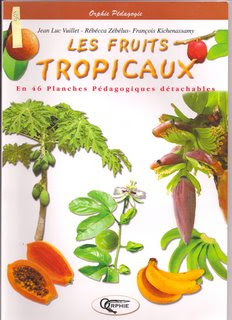 She also brought me samples of spices from there, including vanilla, cloves, pepercorns, cinnamon, ginger, etc. Just looking at them helps me forget the ice and snow outside my window. Abena knew the best way to get me to put Madagascar on my "must see" list was to give me a hint of the food there. It worked. 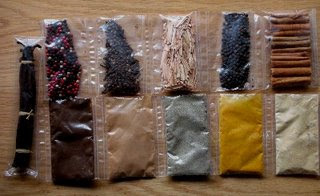 Ahhh...I know you would enjoy Madagascar as much as I did! A truly beautiful country with warm, friendly people.

Salama, I can help you translating some of the recipes written in Malagasy. One recipe at a time though. Email me at radotiana@gmail.com

Here is my blog:

Misaotra betsaka tompoko (did I get that right?).
I'll definitely be in touch with you. I'll also check out your blog.

Tsy misy fisaorana (you are welcome). Your Malagasy is pretty good Fran.
Looking forward to hearing from you.