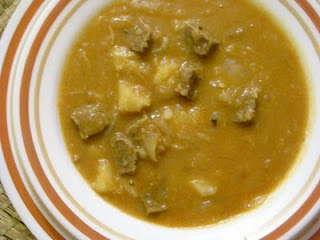 When I lived in Ghana in the 1970s my future sister-in-law Afua made a comforting one-pot dish with (African) yam called nyoma. It is quite similar to the  mpotompoto mentioned in my last posting, but I've decided to feature nyoma first. Sometimes called yam soup, it's actually more of a pottage.

When I asked about nyoma during a luncheon at Flair, a visitor, Mrs. Mabel Aboagye-Darko, told me: first, nyoma is the Akwapim Twi name (my husband from Adukrom in the Eastern Region, and speaks this version of Twi), but that Ashanti Twi speakers call it mpihu; ingredients (for the Ashanti version) include smoked dried fish (cleaned, but with the bones), whole onions, tomatoes, red chili peppers (or green kpakpo shito), salt and bushmeat. She said to peel, wash and chop the yams, and put them on the fire to cook in some water, then add all the other ingredients. When the tomatoes, peppers, and onions are soft, remove and grind them (in an asanka, I imagine) and return to the pot. To serve, remove the yams into the asanka, add a little soup and mash the yams. Finally, heat a little palm oil in a frying pan, add some chopped onions and fry together, then add to the soup and yam. 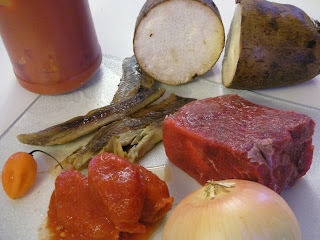 Nigerians make a similar dish, and as always, ingredients and preparation techniques vary.

Here's the version I made recently--after 4 unsuccessful weekly trips to our local supermarket to find an appropriate yam (imported from Mexico) that wasn't rotten, I finally found a small one that was okay, but not great. How I miss the African market that was here last year--Sore used to travel to New York and New Jersey to bring us fresh yams direct from Ghana!

At any rate, I used what I had on hand to go with the yam: salted herrings, local grass-fed beef, fresh habanero pepper, a yellow onion, some palm oil, and canned plum tomatoes.

1 habanero pepper (or to taste)

3-4 Tablespoons palm (or other vegetable) oil

Put the salted herrings into a small saucepan, cover them with water, and simmer them for a few minutes to remove excess saltiness. 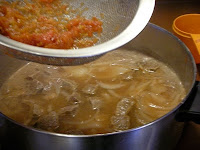 Peel and slice the onion. Put half of the onion into a soup pot. Peel and rinse the yam, cut it into 1/2 inch cubes, and place it into the pot with about 4 cups of water (enough to cover the yam). Cut the beef into small cubes, and add them to the pot. Remove the salted fish from the saucepan, break it into pieces and add to the pot. Bring the water to a boil, then lower the heat to simmer. I don't like tomato seeds, so I forced the canned tomatoes through a strainer into the broth. (Note: Traditionally, people would just toss the whole pepper and tomato into the soup and grind them when they get soft.) Let the soup simmer until the meat and yam are tender. 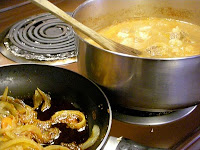 While the soup is simmering, if you have a mini-food processor, grind the pepper, garlic and ginger together (or mince and grate them), then heat the palm or other vegetable oil in a small frying pan, add the remaining sliced onion and spices and fry briefly, then add them to the soup pot and let the flavors blend for a few minutes. Adjust salt and (red) pepper to taste.

This fed 3 adults (my hungry college-aged nephew, my husband, and me).

Variations:  mash the yam with a masher or spoon before serving it; add some cooked dried beans; substitute cocoyams (taro) or cassava. Has anyone ever  tried making this using potatoes?

Anonymous said...
This comment has been removed by a blog administrator.
4:35 AM

Your soup sounds lovely and I will definitely give it a go.

On a separate note, can I ask you a question about pounded yam please? How do you get the right texture to it? It always seems to come out rather fibrous.

I would love to know more about African food, there is much that I don't know!

Yoshi, I hope you'll check back often and that you find this site helpful.

Regarding pounded yam: are you referring to the Nigerian dish? I'm afraid I'm not an expert on making that. Perhaps someone else can help us?

Ah yes I do mean that. Hopefully someone else knows?

National CSR Registry Ghana said...
This comment has been removed by the author.
3:27 PM

Kwame: thanks for the feedback and the suggestions. I, too, have had it with the chunks, and I like it that way also.