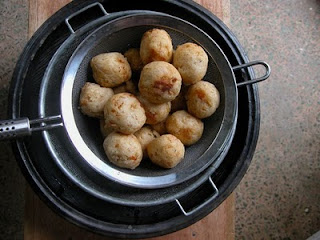 It's almost time for the new yams to appear on the scene in Ghana, but yesterday I bought 9 old puna yams for 25 cedis ($18, or $2 per yam, each weighing at least 4 pounds) , and they were still fresher than anything I could ever buy in State College, Pennsylvania.

Today we prepared some yam balls (in my notes I have written "yele kakro." I understand that is its name in Ga (see Naa's comment below) but am sure there are other names in other dialects and other West African countries, as well. Let me know that, too, please.

Like many flexible Ghanaian/West African recipes, there is plenty of room for improvisation, especially with seasonings. Also, I imagine that if you don't have African yams (please, not the much softer sweet potatoes, which are also called "yams" in the U.S.), perhaps you could try using potatoes. 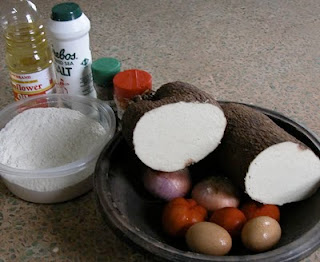 Gather the ingredients first. You'll need ~1/2 teaspoon salt, 2 eggs, about 1.5 to 2 pounds of African yam, 3 medium tomatoes, a large onion (or 2 small), a few tablespoons of flour, some oil for deep-frying (peanut is nice, but we used what we had today, which was safflower)--about 3-4 cups, about .5-1 teaspoon dried ground red pepper, and 1/2 teaspoon dried thyme or a similar spice. We didn't use garlic, but a few minced cloves would have blended beautifully, too. Some people add small amounts of cooked meat as well. 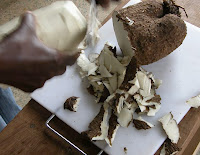 Peel and chop the yam into small chunks to get about 4 cups. Rinse and put them into in a large pot and cover with water (and add a little salt, if desired). Bring the water to a boil, lower the heat, and cook until soft (about 20-30 minutes, depending on the size of the chunks). While the yam is cooking, scald 3 medium tomatoes in boiling water and then plunge them into cold water to remove their skins. Core, and seed, if desired, then chop them finely. Set aside. Peel and mince a large onion. Set aside.

Heat 1/4 cup of vegetable oil in a skillet on medium heat. Add half of the minced onion and cook it for a couple of minutes, then add half of the finely chopped, peeled tomatoes. Cook for a few more minutes, just until the onion is soft but not browned, stirring occasionally. Stir in the thyme, salt, and red pepper. Set aside. Break the eggs into a small bowl and mix with a fork.

When the yam is cooked, drain off the water and mash (we used a potato masher) it while it is still warm. Stir in the cooked onion-tomato-spice mixture and the uncooked tomato and onion. Next stir in the 2 eggs and mix everything well, making sure the yam is thoroughly mashed and not lumpy.

In a small, deep, heavy saucepan put enough oil to fill the pan halfway and heat the oil to about 375 degrees.

Sprinkle a little flour on a working surface (we used a pastry mat), put a little oil or flour on your hands and shape a spoonful of the mashed yam mixture into a ball. We  made them a little smaller than golf balls and ended up with  over 2 dozen.

When the oil is hot (I sprinkle a drop of water in and see how it sizzles to judge when it's hot enough since I don't have a deep-fryer here in Ghana), put several balls in and cook them several minutes until they are golden brown on all sides. Remove with a slotted spoon and drain (if we'd had some cloth or paper we would have drained them on that, but none was available).

We ate ours as a snack while they were still warm, and shared them with some carpenters building me a kitchen table in my new house in Tema. If we'd had some fresh pepper sauce or shito that would have gone well with the yam balls, too. They also make a nice side dish as part of a meal.

For some nice pictures taken today by my undergraduate Penn State student intern/helper/photographer, Katie, who is here in Ghana for 2 weeks with me, check out her creative and lovely blog, Eat My Work. We also made some Tom Brown (ablemamu) for breakfast, and I let her snack on some tigernuts this afternoon. She took pictures of them all.
Posted by Fran at 2:37 PM

慈佐 said...
This comment has been removed by a blog administrator.
12:40 AM

A lot of people ask recipe related questions on http://askmeghana.com so you can passby sometime and help us out. Thanks

Hi there, thanks for posting this recipe. I just wanted to point out that 'yele kakro' is actually Ga not Ewe. ��

Thank you very much, Naa. I'll correct it in the posting.