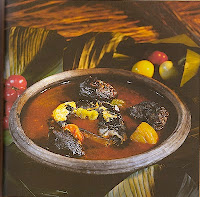 In November I asked readers  whether they could steer me to information about akpi. One of my daughters had recently made a soup with her boyfriend from Côte d'Ivoire  and his mother ("sauce aubergine with crab and oxtail"), and she was enthusiastic about the flavor the akpi added.

Ebele Ikezogwo immediately responded ". . .  I keep a humongous database of exactly that kind of information having walked past ewedu leaves (which I grew up eating) in my local African store for years not having a clue what it was--all because it was labeled 'jute leaves'! I believe one of the biggest impediments to cross-cultural exchange of foods in Africa is the language naming issue .  .  .  Here's my entry on Akpi:
Scientific Name: Ricinodendron Heudelotii
Classification: Spice
Description: Seed with an oily chocolate aroma and a subtly aromatic and bitter aftertaste
Other names: erimado (Yoruba), njangsang (Cameroon), munguella (Angola), akpi/akpe (Ivory Coast)
Uses: Used to thicken Cameroon peppersoup also Bassa-style palmnut soup. General spice."
Ebele provided the push needed to get going.  There's quite a bit of information on the Internet, once you have some direction. For example, Wikipedia points out that the seeds of the tree are found throughout tropical West Africa. It refers to them by variations on one of the names, njansa, njasang and djansang (as opposed to the njansang above),  and includes several other listings: essessang (Cameroon), bofeko (Zaire), wama (Ghana), okhuen (Nigeria), kishongo (Uganda), as well as essang and  ezezang, and also distinguishes between two varieties of the tree species : "R. heudelotii var. heudelotii in Ghana and R. heudelotii var. africanum in Nigeria and Westwards."

The AgroForestry Tree Database also has some helpful information, both on the native geographic distribution ("Angola, Benin, Cameroon, Congo, Côte d'Ivoire, Democratic Republic of Congo, Gabon, Ghana, Guinea-Bissau, Kenya, Liberia, Nigeria, Senegal, Sierra Leone, Tanzania, Togo, Uganda, Zambia"), as well as the tree's common names, and information on its uses, as food, medicine, etc. (for example, " The kernels can be eaten after boiling in water, or in sauce as in Cote d’Ivoire, or mixed with fish, meat or vegetables. In Gabon kernels are roasted and made into a paste."
I look forward to tasting this spice. I'm especially interested in it as a flavoring in sauce. I located a single recipe in English online using akpe, a Liberian recipe for Dry fish and rice. However, I did find several recipes in French for "la sauce claire au foufou banane" that use akpi, such as one on Facebook There is also a tempting looking version en français (as shown in the photo above above) in Cuisine de Côte d'Ivoire et d'Afrique de l'Ouest. If someone is willing to translate it into English, let me know and I'll send it to you. 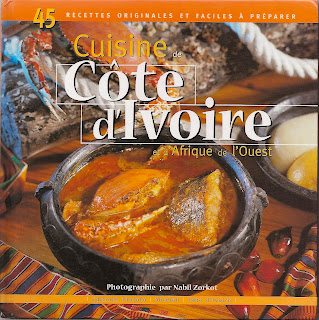 Incidentally, I hope you are all aware of the horrible goings on in Cote d’Ivoire after the contested elections and the threat of war there. Please pray that 2011 sees an end to the terrible violence the Ivorian people have endured for so many years.
Posted by Fran at 2:30 PM

I came across your blog looking for more information on akpé. I grew up in the Côte d'Ivoire but had never heard of it until now when some childhood friends mentioned it. Thanks for sharing more about it!

If you would still like someone to translate that recipe, it would be my pleasure to do so. My email address is Biche@ChickAboutTown.com.

I really need the akpi,am in Abuja how can i get get it please?

I need it how can I get it

Nice one, how can get it here in Togo and how is it called in Togo

Where can I purchase njanga akpi in the US with a credit card?

This is my first time of hearing the word akpi where can I get it here Lagos Nigeria?

This is my first time of hearing the word akpi where can I get it here Lagos Nigeria?

I'm sorry, I cannot help you. Perhaps you could check with Kitchen Butterfly, a food blog on Nigerian cuisine.

Am in Abuja, where can I get it

What is akpi in Yoruba language please. Thanks

I want some and am in Ghana

I'm in katsina were can I get it

I am in lagos,pls how do o get it?

Blogging requires more than just uploading a post.
It also entails replying comments posted on your site.
People have CONSISTENTLY asked one question WHERE CAN I GET IT?
Yet no response from you.
Please do the needful

I am in London, please where can I buy Akpi seed. Thanks