African Gastronomy Coming to the table at TEDGLOBAL 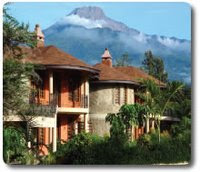 TEDGLOBAL "Africa: The Next Chapter"

The insightful and far-seeing organizers and supporters of the upcoming TEDGLOBAL conference in Arusha, Tanzania recognize that Africa's culinary star is rising. "TED" stands for technology, entertainment, and design, and TED's annual conference in California is legendary as "an annual event where leading thinkers and doers gather for inspiration. " This June they're holding their first conference in Africa. Tami Hultman, now of allafrica.com, who in 1985 edited the fabulous Africa News Cookbook, nicely summarizes what the conference is all about.

Emeka Okafor, a UK-raised, New York-based entrepreneur of Nigerian origins, has been hired as the conference organizer. Well-known, among other things, for his fabulous, eclectic blog timbuktuchronicles, he realizes the importance of African entrepreneurs involved in the African-food industry.

100 of the invitees to the (pricey) conference are described as ". . . people actively involved in creating Africa’s future who could not afford to attend on their own. Four companies – AMD, GE, Google and Sun Microsystems – are providing fellowships to cover expenses, and admission fees will be waived." I am honored to have been selected to receive one of those fellowships, and hope to represent African culinary and other food industry professionals. I have some ideas to carry along with me (from a digital archive of African cookbooks to culinary teaching dvds to a television show), but please let me know your suggestions, observations, etc.
Posted by Fran at 3:13 PM