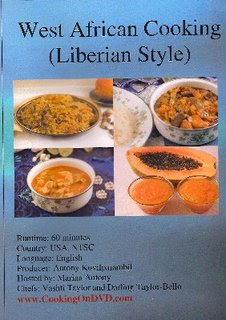 I salute Mr. Kovilparambil and Ms. Antony for their pioneering efforts that enabled me (and others outside Liberia) to learn more about Liberian versions of several familiar West African dishes, and also to see Check Rice and Tabughee prepared. I noted a general absence of the tomatoes and ginger common in much Ghanaian cooking, and a more frequent use of celery. Still, I was somewhat disappointed in the repetitiveness of the recipes, the heavy hand with seasoning cubes (increasingly common throughout West Africa), the limited use of fresh ingredients, and the complicated cooking procedures. I was left with a couple of questions: in Liberia do people really combine shrimp, beef and chicken, and sometimes fish in almost every dish? Why would they cook each of those ingredients in separate pots before combining them?

The demonstrated recipes are included as a Word file on the DVD to print out (the install program seemed way too complicated, so I just printed out the files on my Mac and also a PC directly from the DVD after exiting the menu and had no problem.) A slightly more expensive version includes printed recipes. More information is available at http://www.cookingondvd.com/cooking/liberian.html
Also, they have another DVD from East Africa coming out soon, that will focus on Ethiopian cooking.
Posted by Fran at 8:35 PM