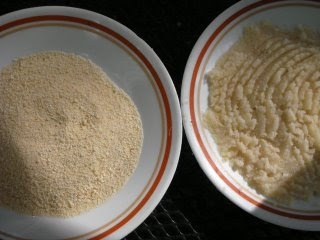 The response so far to my ambitious proposal of a couple of days ago, while thoroughly encouraging and supportive, is: "don't go crazy (and make us crazy) trying to bang out a recipe a day: focus on quality, not just quantity." That's good advice. I'll revise my plan to just 1 or 2 recipes a week.

Also, some people have written to ask if putting recipes online might not imperil a cookbook contract. I remember when I worked at Penn State as an instructional designer for their "World Campus," and there was a great emphasis on controlling the information available in online courses so that it didn't escape "out there" in the cyberworld. A year or so later our family spent a sabbatical at MIT in Cambridge, Massachusetts, where the school announced they were making all of the information from their online courses free to anyone who wanted it. They were not marketing their knowledge, but their expertise. I guess I feel the same about my upcoming cookbook. Besides, all of the recipes won't be there, nor will those that are be in their final form, nor will the professional photos from Ghana be included, nor the supplemental information, and a lot of the stories.

At the end of May I'll be talking at a conference about cassava, a hugely important staple in many parts of Africa (and other tropical countries outside of Africa from Brazil, where it originated, and spread to other parts of Latin America and the Caribbean, as well as Indonesia and Asia). Particularly important in West Africa is the coarse cassava meal known as gari. Gari (aka gali or garri) is a processed form of cassava (or manioc, mandioca, yucca, yuca, singkong, ketela, or ubi kayu, depending on what part of the world you are from and what language you speak). When I was in Brazil in 2007, I explained that it was similar to the Brazilian farinha de mandioca. It is a popular convenience food in West Africa due to its low cost, easy storage, long shelf life, and ease of preparation, plus it is very filling.

Gari is made from cassava, a root crop we in North America really only know when processed into the starch tapioca, which we use to make puddings and thicken things. But there is much more to the cassava than that. It is a staff of life to many people in tropical places, and especially in West Africa. There's no room here to go into a detailed history (plus there are already a lot of places on the web you can get that info: just do a google search on cassava); the same is true of West African gari (just don't confuse it with Japanese pickled ginger: that's a totally different gari!)

The processing of the cassava root involves washing, peeling, grating, soaking, pressing, drying, and toasting. The net result is a kind of cassava "couscous," that can be served simply by adding lightly salted water. I always boil my water before I sprinkle or pour it on the gari, but that is just me. Gari is very filling. It swells up when water is added, and can be eaten as a side accompaniment to a stew.

Preparing gari this way is faster than rice, and easier than couscous. The picture above shows 1/4 cup of dry gari on the left, with 1/4 cup gari sprinkled (and then stirred and let sit until it swells) with 1/2 cup of boiling water. There's a wonderful tangy smell from the fermentation of the cassava that releases when the water hits the gari.

Serve with a stew or sauce. For example, put a little oil in a frying pan, slice some onion into it, saute until golden, open a can of Goya sardines (rich in omega oil!) in tomato sauce, add it to the pan, sprinkle in a little red pepper if you want (and/or some beaten egg, or spinach if you like), and you have a meal in less than 10 minutes, even if you have to cook the spinach in the microwave before adding it to the stew. I've served gari to many North Americans who had never tasted it, and it was a very accessible flavor: it's mild, and makes a good canvas for a variety of stews, or when cooked into a one-pot as in gari foto. Incidentally, not all gari is the same texture: the Nigerians prefer a much coarser cassava meal than Ghanaians. However, you will have to find an African or International market to find it, or order it online since you will not be able to find this at your local supermarket. By the way, it's also very inexpensive.

There's a lot more to say about how to eat gari, but not today. (I just finished hosting a symposium luncheon for all the students in one of my husband's graduate courses, and as we were finishing up discovered a Ghanaian family is in town for their son's graduation, and I've invited them for dinner, so it's back into the kitchen. BTW, I made plantain chips to serve as an appetizer today to use up four plantains I had left over and they were a huge hit with students from: Nigeria, India, Japan, China, Ghana, Brazil, and Pennsylvania!
Posted by Fran at 5:00 PM

i live in calif. do you know where i can buy gari? or even order it?
here in fresno, calif, in the super markets like vons, wholefoods, etc we have a product called yucca root. looks like cassava, but i am not sure. do you think it is the same?
Larry Von

I checked African chop's listing of suppliers in CA and got the following. You can see if they'll ship.

AGAIN,do you happen to know if the yucca sold in calif is the same as cassava?

Yes, yucca is cassava.Sorry I forgot to mention that.

To be more specific, the term “cassava” comes from the Arawak word “kasabi”, while the Caribs called the plant “yucca.” "Manioc," another term for the same plant, comes from the Tupi language of coastal Brazil.

I am trying to consume the yucca in the most advantageous manner i.e., retaining all the vitamins and nutrients. If I bake, boil or fry it I lose a lot of nutrients. Any recipes you can suggest that I prepare yucca nutritionally?

Sorry, I'm not a nutritionist. But I do know that you need to cook the cassava before eating it. I'm afraid I cannot compare boiling to frying.

I am from Venezuela and YUCA has to be boiled so that it loses its poison (cyanide); our indians commit suicide by drinking yuca juice unboiled. I eat a lot of yuca like millions of Venezuelans have for centuries, and we never hear of any yuca related deaths.

I bought Gari the other day in my local supermarket in the UK!!
I have eaten it when I was in Ghana and was just having the feeling to be adventorous and try it my self. Looking how to cook it, I stumbled accross your website and I love it instantly.
Let's see what the kids (6 & 8)think of it once I have cooked it!!

Let me know what they think. I find gari foto is very accessible to nonGhanaians.

Gari from Ghana is available here in Oakland, CA at the African Caribbean Food Market in Old Town. (877) 481-4649. They also have fresh cassava. I get all my ingredients there. My son enjoys their Coca-Cola from Nigeria and Plaintain Chips; I enjoy the Ginger Beer. Very friendly.

I've bought gari many times (here in Germany) and tried to get used to the taste. I just can't. It's too sour. Everyone who has tried it that I know of wouldn't even eat it. Since you wrote that Americans seem to accept the taste easily, are there different kinds of gari?

You can visit the African Food Online Store in UK

Olivia bush said...
This comment has been removed by the author.
12:45 AM