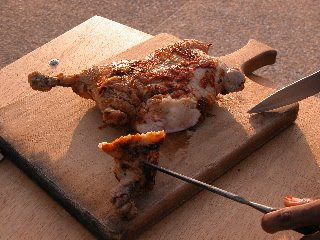 I did an online search to see just what people had to say about "Ashanti fowl," a boneless stuffed roasted chicken. The Congo Cookbook probably had the most comprehensive information, especially about its similarity to Louisiana chef Paul Prudhomme's "turducken." The Congo Cookbook listed (and other people followed its lead in stating there were) only 2 written recipes: Alice Dede's and Barbara Baeta's. Not quite correct: Alice Dede's 1969 version is an adapted version from the earlier Gold Coast Nutrition and Cookery (GCNC) published in 1953. That recipe for "Ashanti Fowl" (p. 146) is identical to Dede's, except that Dede substituted 2 slices of yam for 2 slices of bread. The original recipe using bread seems to indicate some European influence (perhaps a Ghanaian chef experimenting for expatriates?) Please note that Dede is referring to African yam, NOT sweet potatoes or American yams. In Barbara Baeta's 1972 version (see photo on left, from her 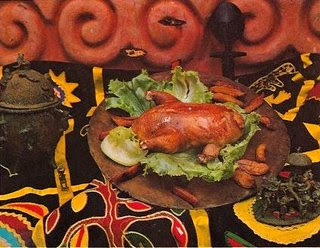 printed recipe cards), she calls for cooked mashed yams or potatoes. REPEAT: sweet potatoes are nowhere mentioned--this substitution in online recipes is likely due to the confusion over American "yams," which are not at all the same as African yams (I know, I know, I keep saying this over and over). A starchy potato, like a russet, would be a far better choice if African yams are not available. But if you can get them, puna yams from Ghana are best! Or, go back to bread stuffing. By the way, "a slice" of bread or yam is quite imprecise, as you'll see when we get to the stuffing mix part in another blog posting.

Interestingly, in GCNC the recipe immediately preceding the one for the roast fowl includes the "African method" of roasting fowl, which means stuffing it with ground red pepper (as in freshly ground chili peppers), onions, salt and tomatoes. This is consistent with Ghanaian spicy flavor principles. The GCNC book also includes a recipe for making gravy to serve with the roast fowl. This is a Ghanaian-type gravy made from heating a little oil, then browning a tablespoon of flour in it, adding chopped onions, chopped tomato, ground (fresh red) pepper and salt, then adding water, letting it boil for 5 minutes and stirring it well.

I think making gravy to accompany Ashanti fowl is a good idea.

Okay, fast forward to the 21st century. When I was spending time with Barbara Baeta in Ghana at Flair Catering a few years ago, I asked if we could make Ashanti Fowl since I'd always wondered how to do it. She arranged to have one of her young assistants, "Henry (Henrie?)," show me his version, which varied somewhat from Barbara's original recipe.

However, making Ashanti chicken is not for the faint-hearted nor the person in a rush. It's pretty complex, so I'll break it down into parts.

Today I'll talk about the first part, which for me was the biggest challenge, de-boning the chicken. Most recipes simply say "de-bone" or vaguely "remove the bones from the chicken" (I'm sure you could use another "fowl, " like guinea fowl, but in this case they always seem to mean chicken). I'm not trained as a professional chef, and maybe you learn de-boning chickens in chef's school, but for the rest of us, here's how I did it. Sharpen your knives before you begin!

Fortunately, I didn't have to kill and pluck the chicken and remove its insides. Here are the photos I took, messily, as I worked in the kitchen: 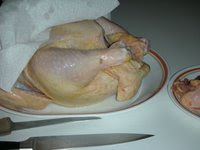 Wash and pat the chicken dry with paper towels. I used a roaster chicken, heavier than the 3 or so pound chicken usually recommended. A roasting chicken is "harder" than a fryer and thus easier to debone.

2. I should have started by cutting of the wings at the joint (that caused a problem at the end), but instead I began at the top (back) 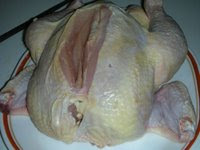 by the neck end and carefully cut alongside the breastbone, cutting down to around where the thigh is and turning it around and cutting back the other way. Notice, I didn't cut all the way to the end.
3. My notes said "cut the drumstick free and loosen both sides." I gather that meant cut it free at the joint, loosen the skin from the chicken, then flip the drumstick (without its skin) outside so that, holding the fat end of the drumstick, you can scrape to the bone to 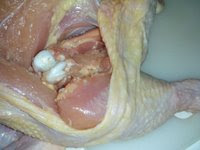 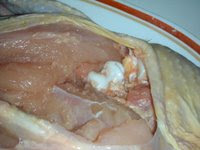 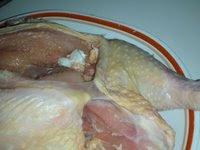 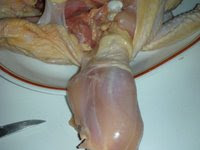 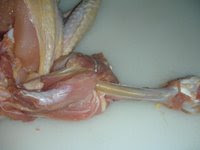 4. Using a cleaver (or other heavy knife), break the bone so that about a half inch of the end of the drumstick is left. This is the only bone that will be left in the whole chicken at the end. 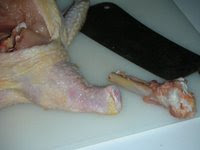 5. Push the drumstick end back into the chicken and repeat with the other drumstick.

6. Loosen the skin all down the back, starting from the neck end to the tail. I had trouble with this near the end because the skin 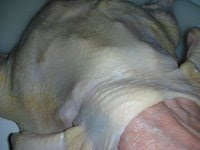 wouldn't easily loosen from the bone and wanted to break.
7. The next part was cutting the backbone off and separating it from the breastbone. That was kind of messy. 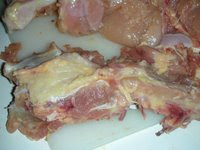 I was breaking bones and trying to figure out how to separate the two. It finally came out. It looks like I forgot to take pictures near the end (it was getting late, everyone was hungry, and I was trying to hurry). 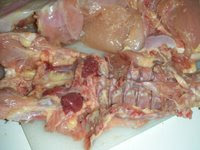 The net result was, I eventually separated the breastbone and backbone, scraping as much meat as possible off the bones before I removed them. 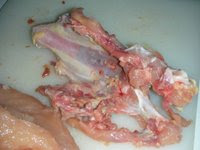 8. After I did all that, I should have had all the bones out (except for the token end of the drumstick, which is part of the final 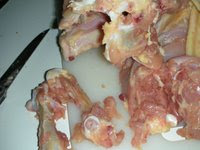 presentation). However, since I had not taken care of the wings earlier (at the beginning, right after blotting the chicken), I had to cut them each off at the joint, and remove them.

9. By this point the chicken was deboned, and I just realized I didn't take any pictures of it flattened out before I stuffed it. The next one I took was when I had already stuffed it. Whoops. At least you get the idea. Check back soon to see what I included in my stuffing, and the rest of the adventure. My apologies to all of you who can neatly and efficiently do this deboning bit. Are there better online resources showing how? 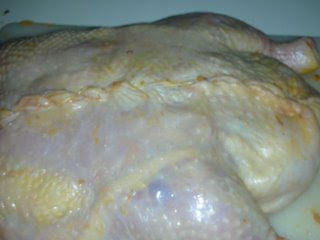