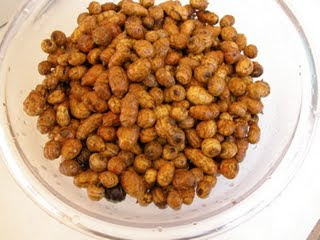 There is a grass-like sedge, cyperus esculentus, from ancient Egypt, whose nut-like fruit, actually the root, grows underground like a peanut (or groundnut) and that is known in Ghana as tigernut, and in Mexico and Spain as chufa (where they are used to make a drink called horchata (or orxata) chufa . Apparently, the Arabs took the sedge from Egypt to Spain between the 8th and 13th centuries, especially to Valencia. The Spanish took it to Mexico.

Today it grows throughout the Americas, including almost every state in the U.S., where it is used as feed for turkeys, ducks and wild game, and as fish bait. That's like saying corn is only fit to feed cows, or peanuts are only for elephants.

I'm fond of a rich version of a wonderful pudding, called atadwe milkye (tigernut milk), made from these nuts ground together with rice and sugar, then strained repeatedly, cooked and chilled. It looks like it has milk in it, but does not, and so is a nice choice for the lactose intolerant.

When I asked Barbara to teach me to make it, she reminisced about how she served this pudding to Hassanal Bolkiah, the Sultan of Brunei, and his family in 1999. She served it in crystal champagne glasses, with fresh fruit.

While we were in Ghana in 2008, I broke my cheap electric blender trying to grind the tigernuts (in 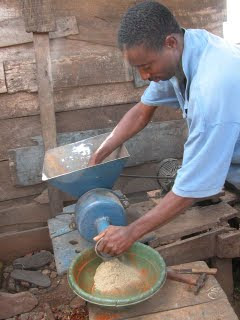 Ghana one just sends things to the local miller at the market, from corn to millet to tigernuts, as shown below).

Since coming back to the U.S., I was uncertain of where to obtain tigernuts, but finally settled on ordering Spanish chufa from La Tienda. They arrived yesterday, and I'm excited to try my hand at duplicating the recipe Barbara and I developed at Flair. Perhaps I'll presoak the tigernuts, and maybe use my food processor to grind them. Check back to find out how it goes. 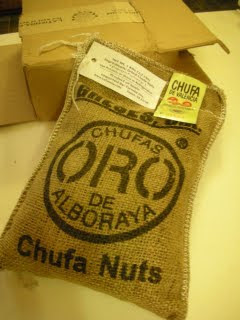 I can't wait to see the recipe. I Love ataanme nmliche(as we Gas call it). My cousin used to make it for me, when I still lived at home. I've no idea how she ground the tigernuts.I don't know where to find them here(UK).

Just visited Accra last month and had some tiger nuts! Love them!

Anthia-Ofo: I hope you heard that my blog is now hosted at blogspot. Please change your bookmark to
www.betumiblog.blogspot.com. That's where you'll see the recipe. I stopped hosting the blog at betumi.com itself on Nov. 4. All the old posts are also now at the new address.

I am trying to put together a cookbook with some wonderful photographs that Steve Ababio and I have put together. I would really like to get in touch with you. Franka Maria Andoh

I am trying to get in touch with you. Working on a cookbook with some fantastic photographs of
Ghanaian meals.
franka_a@hotmail.com

So in Ghana the only traditional chufa dish is a dessert pudding; would you know any contemporary uses?

Tiger nuts are mostly commonly chewed as a snack. When they are in season they are sold throughout Ghana and their slightly sweet, juicy flavor (a bit reminiscent of almonds) is very popular. I understand they also have industrial uses (e.g., their oil), but I do not really know about that.