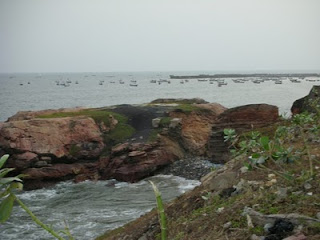 This week finds me in Ghana checking up on my son DK as he recovers from typhoid (in Tema) and greeting my niece's newborn son (in the Eastern Region). Already the snow and ice of central Pennsylvania are ebbing from memory like a bad dream.
Coconuts are readily available here, along with pineapples (they call the wonderful sugar loaf pineapple the "Cape Coast" type), sour sops (custard apples), avocados and large mangoes (not the smaller traditional type yet). We've been feasting on them, along with oranges, tangerines, watermelon, and bananas. Yesterday I chopped up some mango and pineapple, threw the pieces into a blender, then strained some of the 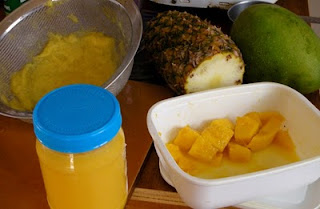 pulp out to make a nectar. Creamy and refreshing. DK said adding watermelon juice would have thinned it without any need to strain it. Today I mixed in orange juice with some of the nectar for breakfast. Yum.
It's also a treat to have fresh African yams. Speaking of yams: a few nights ago DK and one of his co-TEDFellows (Nina Dudnik of SeedingLabs) plus Sharon B. Stringer, my  friend  from Pennsylvania newly arrived to teach at Legon on a Fulbright, went out to dinner at a lovely seaside restaurant in Jamestown. Nina was leaving for Boston the next day and wanted to try some yam chips and pepper sauce, which she duly requested. She made sure the server 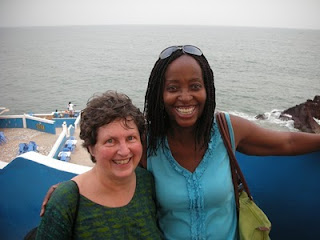 understood she didn't want potato chips ("I can get those in the U.S. I want real yam chips and pepper sauce"). I ordered palaver sauce and boiled yam, and DK had banku and tilapia. However, when the food arrived and Nina began eating (it was dark by the time we got there and visibility was very poor), she discovered they'd served her potato "chips" (French fries) and ketchup! And her fried "chips" were obviously imported frozen ones that were tasteless and spongy.
Amazing. It seems obvious that freshly  made yam chips with fresh pepper sauce are far superior to imported "obroni aduane." Nina did not say anything then, but when the server returned to collect the plates, she told her of the problem and the server was apologetic. 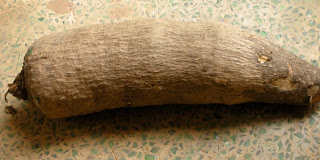 Meanwhile, from my boiled yam it was clear there was plenty of yam available.
If we file that experience under "customer service," here's another one. In the U.S., the mantra is "the customer is always right." In Ghana, that is reversed to "the management is always right" and "If in doubt, ignore the problem until it goes away."
Earlier the same day as the potato chip (French fry) fiasco, I  experienced another version of this way of thinking. As many people know, the serving sizes in Ghana tend to be several times the sizes in the U.S. DK and I went to a small restaurant he frequently eats at. He wanted jollof rice with chicken and I wasn't very hungry so we decided to order a takeout version and share it. However, when we asked  to put one order in 2 "take away" boxes, we completely upset the balance of the universe. The server insisted she could not do that, even though we offered to pay for 2 boxes. Here's the math: the jollof rice was 4 cedis, plus 1 cedi for the takeout container, or 5 cedis total. The server went away from our table and never returned. The customers who arrived after us were served and we were still sitting there. When DK finally went to ask the owner what was going on, it appeared they were prepared to just ignore us for the rest of the day. Then they said it would cost 2 cedis for an extra container, and when he objected, they said it would cost 10 cedis for one serving of jollof rice in 2 containers. Ghanaian mathematics!
At that point we left and bought some roasted plantains and groundnuts (peanuts) at the roadside instead. Apparently the restaurant was short on "take away" boxes and the employes were afraid the owner would give them a hard time if they let us use two for one portion of food. This beautifully illustrates how powerless servers often feel, and their inability to deviate even slightly from a rigid set of rules.
TEDGlobal: I mentioned TEDFellows above. I was a TEDFellow invited toTEDGLOBAL in Tanzania in 2007, and my son DK  to TEDGlobal in Oxford in 2010. If you want to change the world and are already working to do so, check it out. Applications are now being accepted until 11 March 2011. For more information:
Individuals can apply online at
www.ted.com/fellows/apply (short: http://on.ted.com/8qco)
Press release: http://www.prnewswire.com/news-releases/ted-opens-application-process-for-fellows-program-114141589.html
Posted by Fran at 7:49 AM

Fran,
Glad to see you are enjoying Accra with all it's interesting quirks. I concur that in Ghana, customer service is lacking and not a priority and I wonder when we will realize that the customer is always right...but I am hopeful that with the advent of "oil" we will get there! Digressing, I just had a relaxed dinner over the weekend for some 10 friends and we had some really good yam chips, gingered turkey wing and fresh shito. It brought back memories of holiday classes at Aquinas Secondary School's fried yam and chofi stand. Those were the good old days...If the lady is still there you should check her out because she had the best fried yam in a 10mile radius!