Question #8: Why so few African restaurants? 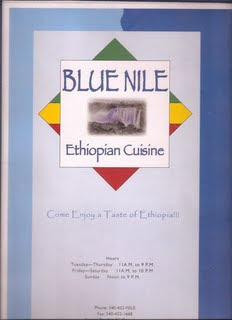 At a local community business event in central Pennsylvania recently I asked fellow business owners whether or not they'd eaten any African food. I got no positive responses. Zero. That included not having tasted the most popular and visible sub-Saharan African cuisine, Ethiopian. None of the people I spoke to had ever heard of injera (see my last few postings). I shared that information with Ethiopianist Harry Kloman in June, and he responded "There are about 250 Ethio/Eritrean restaurants in the U.S. There are more than 1,000 Chinese restaurants in New York City alone. Simple math!" (It's hard for me to believe the number can be that low for Ethiopian restaurants. Does anyone else have any information?)

People often ask me why there are so few African restaurants. An obvious reason is that they are non Euro-American cuisines, and not places where many North Americans have visited/done business/been stationed during a war/have family members, etc. The tourism industries that exist tend to favor safaris (Kenya or Tanzania) or wineries (South Africa), not culinary and cultural heritage. Thus there has been little exposure to and consequently, little hankering for, the foods of these places. The only exception might be small numbers of diplomatic, academic, religious or Peace Corps people.

Several West African restaurant owners have told me they had to include "Caribbean" in their restaurant names in order to attract customers (e.g., "Caribbean and West African Restaurant," or "Afro-Carib foods"). I've also been told that they need to include bar service and music groups to attract customers. Perhaps "Afro Pop" and "World Music" have an appeal that is better recognized than cuisine.

However, I also realize that in many parts of sub-Saharan Africa there is not a tradition of restaurant-going equivalent to that 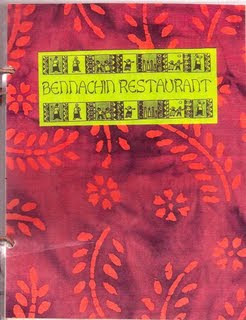 I've seen in Japan or Europe or Brazil. West African immigrants here say to me "Why would I go to a restaurant when I can make my own food, better, at home?" For weddings they may well hire an African caterer to provide quantity cooking, but they're not likely to go to a Nigerian or Ivorian or Ghanaian or Senegalese restaurant for a meal out.
Over half of the immigrants are from West Africa. So why are Ethiopian/Eritrean restaurants the most popular of sub-Saharan African restaurants? Perhaps it has to do with war and immigration. Perhaps because Ethiopians are seen as somehow less "black" than other sub-Saharan Africans, and hence more acceptable.
Some people claim that West African food is less accessible to Western palates than other "exotic" cuisines. That is nonsense. (I've already stated my opinion of such things as the claim that Africans prefer "rubber tire" toughness to their protein sources (see my April 22, 2009 posting). Perhaps a goodly part of the blame falls to mistaken racist ideas that are linked to negative media images of Africa, and, by implication, the belief that African food is primitive, boring, "poor" in all senses: nutritionally, level of sophistication, variety, quality, etc. On the other hand, some of the family-style African restaurants (such as those favored by African taxi drivers) do pay scant attention to the presentation of the food and the surroundings in which it is served, and instead emphasize huge serving sizes. That seems to be changing as there are increasingly more places like Teranga, featured in my last blog, with increased emphasis on creativity, ambiance, and quality over quantity.

That is surely going to accelerate as more and more African restaurants emerge, especially in large cities. Oh, another thing I've learned about African restaurants--they're often undercapitalized, and it's hard for potential entrepreneurs to get loans and other community support. 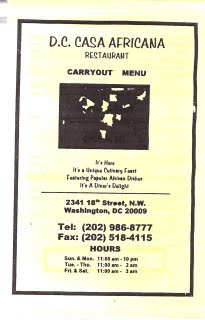 I look forward to the day that we organize a voice for African restaurants, markets, farmers, processors, etc.--a professional African culinary association, to promote industry visibility and provide a public face that showcases Africa's fascinating culinary richness and diversity.
Posted by Fran at 2:00 PM

I found a tagine in a nearby store using Milo.com http://milo.com/search?q=tagine

That's fantastic. I actually hand-carried a small one with me from Morocco. I'll check out milo.com

In Greece, Africans like most migrants face structural disadvantages (lack of documents, such as work and residence permit). Some of them holding a degree from a Greek university decide to overstay in Greece and get a job, but are encountered with racial discrimination in the Greek labour market. Thus, many of them decide to set up businesses like restaurants, candy shops etc. But the procedure a migrant needs to follow in order to become a self – employed is very complicated. He needs a white or green card, has to be a member of an insurance scheme or to have proof of ethnic Greek origin etc. Only a few, who have obtained Greek citizenship are able to set up formal business activities; Only a few are able to set up restaurants and most of them are of Greek-Ethiopian origin.
Moreover Greeks don’t appreciate African cuisines, because they believe that are ‘poor’ and very boring.
Last 7 years a splendid African food and music festival is organized by the African Embassies and African associations in Athens. Shall I have to tell you that most Greeks visit the North African, Ethiopian and South African kiosks?

Thank you for your sharing something about African food in Greece. I'm happy to know about your blog (http://www.historyofgreekfood.org/)

I think part of this issue is about publicity and part of it is about the issue of variety in the geographic sense and in terms of what's featured on the menu. Most African restaurants do not get the publicity to continue operating for more than a year or two or they change locations and never tell their clients. I think people are willing to 'take risks'
and try new food, but half of the battle is finding the place.
Another observation: almost every big city has at least one Ethiopian restaurant, but when is the last time you went to a restaurant that specializes in Kenyan food? I know of one place in Washington DC but honestly they're serving fried chicken and rice on most days...you have to ask for another dish if you want it, but then again, you have to already know what cuisine is available from that country/region to even begin that process. I think another issue is the pace in most African restaurants is a real learning curve for most people. Two hours for vegetarian ugali?

Probably many small African restaurants (like food stores) are catering primarily to local African immigrants, and do need to think on a larger scale. Certainly I've had the experience of poor customer service that you mention (long wait times, menus that are meaningless, lack of responsiveness of servers), but I've also been to restaurants with fantastic service, creative environments, and delicious menus that have failed to thrive.

Nice blog, I agree with your comments about restaurant eating, at least with reference to Nigeria where I come from.