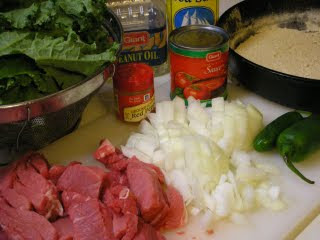 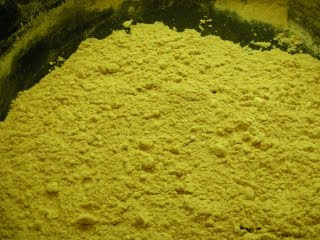 This is an easy, tasty stew that uses familiar ingredients in familiar ways, but with a different twist. While wheat flour is an imported ingredient, it has found its way into many classic Ghanaian dishes, such as this stew my sister-in-law taught me years ago. The secret is that you begin by browning the dry flour in a heavy pan (I use the same cast iron frying pan I got with S&H green stamps when I was first married. You'll see it regularly in the photos I'm posting at the blog).

Begin with a clean, dry, heavy frying pan and heat it to medium, then add a couple of 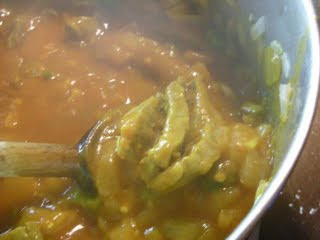 tablespoons of white wheat flour into the pan. Stir or gently shake the pan until the white flour turns brown. (I've never tried this with whole wheat flour, but it would probably be fine that way, too). It will probably take 10 to 15 minutes, but watch it carefully to keep from burning it. When the flour is brown, empty it into a small bowl so it doesn't keep cooking, and set it aside. Take the pan off the heat, too. 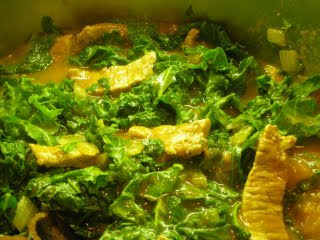 Slice a pound of meat such as chuck roast or top round into medium strips--not as thin as you normally would for a stir fry, but not as thick as you would for regular beef stew. Peel and chop or slice a medium-sized onion and peel a couple of cloves of garlic to mince or press in a garlic press. Seed and mince a couple of peppers (I used jalapenos for this, but depending on your taste for chili peppers, you could use a Scotch bonnet or habanero, or a milder pepper). If you are not used to cutting fresh hot peppers, remember that the oils can get on your hands and be careful especially not to touch your eyes. Many people advise using rubber gloves when cutting hot peppers, but I've never seen such a thing in Ghana, and cannot imagine doing so myself, though I've been known to hold peppers with a fork when mincing them. Another strategy is to remove the stem and throw peppers into the stew whole, eventually squeezing the hot juice from them into the stew, but removing the actual pepper to give to those who like them.

Heat a couple of tablespoons of oil (I used peanut oil this time) in the frying pan over a medium heat, the throw in a little of the chopped onion for a minute or two, then the meat, raising the heat a little so that it browns on all sides. Add a little more oil if necessary to keep everything from sticking. Add the rest of the chopped onion and the garlic and chopped pepper and stir well, then add a little dried red pepper to taste (begin with 1/8 teaspoon if you're not in favor of very spicy food), an 8-ounce can of tomato sauce, a teaspoon of salt or to taste, and a cup of water. Stir well. Sprinkle the browned flour over the stew and stir again. Lower the heat to simmer, cover the pan and cook the stew until the meat is tender, maybe 20-30 minutes. 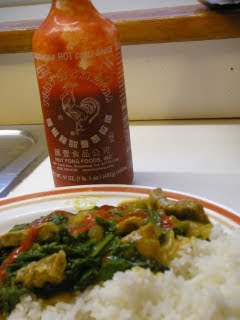 Because I'd just received a bunch of fresh kale from our CSA farmers that day, and because I'm a big fan of one-pot meals, I washed and chopped it, and added it when I added the meat, so that they all cooked together. Check and adjust the seasonings (salt and red pepper) before serving.

By the way, I had no shito (Ghana's hot pepper condiment, also known as black pepper) handy, so I just grabbed a bottle of chili sauce from the refrigerator, and let everyone add his or her own at the table. We ate this stew with basmati rice.
Posted by Fran at 10:50 AM

pls, what is kale! the leaf use in the stew. Can i use any other leaf or vegetable.

Yes, kale is just one kind of green leaf that I happened to have in the house. You can use spinach, or any other greens that can be cooked. And yes, you could also add any vegetable you like, from mushrooms or okra to eggplant or squash. Good luck.