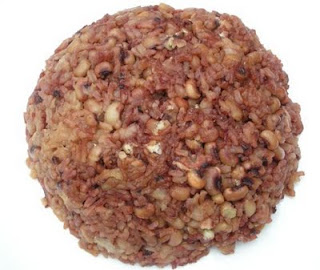 Today I made 3 different versions of waakye (pronounced "waatchy") the classic rice and "beans" dish from Northern Ghana: 1) a quick and easy version to make in an electric rice cooker, 2) an "every day" version, and 3) one that's a little fancier.

Waakye makes a great vegetarian meal by itself, with a little tomato gravy or shito (or any chili sauce), and/or a side vegetable like some kind of greens, and/or accompanied by a stew with meat or fish or poultry. People nowadays often top the waakye with a little spaghetti, so if you want to follow that tradition, cook a little for a garnish. 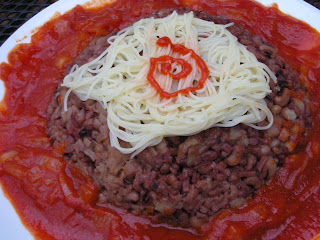 Generally  "black-eyed peas" or other cowpeas are used, and some kind of white rice. I made mine with black-eyed peas and regular long-grain white rice, but you could also use basmati or even brown rice. Or, if you can get it, one of Ghana's indigenous rices like aveyime rice ("Volta rice"), or varieties grown in the Northern regions. Sadly, much of the rice sold in Ghana today is imported from outside the country, at an annual cost of  about $450 million dollars.

Waakye is simple to make. In Ghana it would often be made with fresh or dried millet leaves (stalks), and kanwa (a mineral used to soften the beans), but baking soda (sodium bicarbonate) can be substituted to give the waakye its characteristic color.

All 3 versions use the same basic ingredients: rice, salt, black-eyed peas, water, oil, onion, and baking soda, with a couple of variations.

1) Waakye in a rice cooker

For this version put into a rice cooker: a 15.5 oz can of black-eyed peas, drained and lightly rinsed (this is about 1 and 1/2 cups), a cup of white rice (wash first if necessary), 1/2 to 1 of teaspoon baking soda (a full teaspoon will make it a little darker), a half teaspoon of salt (or to taste), a tablespoon of vegetable oil (like peanut or canola), a half cup of chopped onion, and 2 cups of water. Stir, cover, and cook. That's all there is to it! It cooks in about 30 minutes without burning. 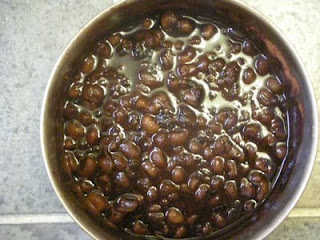 Rinse and pick over a cup of black-eyed peas, then soak them for about 4 hours covered with water (or, if you're in a rush like I always seem to be, just bring them to a boil in a saucepan, let them boil for a couple of minutes, sit for an hour, drain off the water and add 2 1/2 fresh cups of water to the sauce pan, along with a teaspoon of baking soda, a cup of rice, the 1/2 cup chopped onion, a tablespoon of vegetable oil, and 1 teaspoon of salt. Bring it to a boil, lower the heat to simmer and let it cook, covered, until the rice and beans are cooked. Watch out that it doesn't burn. It may need a little more water and stirring while it cooks.

Rinse well and pick over a cup of black-eyed peas, then put them into a saucepan with 3 cups  of water and 1 teaspoon of baking soda, bring it to a boil, lower the heat and simmer for about 30 minutes. Add the cup of rice, teaspoon of salt, 1/2 cup chopped onion, and either another cup of water or a cup of coconut milk. In place of the vegetable oil, use a couple of tablespoons of coconut cream (from the top of a can of unsweetened coconut milk), and a sprinkling of a spice of your choice (e.g., thyme, oregano). Bring to a boil, lower the heat and cook, covered, until the rice and beans are tender, about half an hour. Check a few times to make sure it is not burning, and add more water if necessary.

An article in a food science journal suggests that using baking soda may be somewhat detrimental to the retention of some of the water-soluble b-vitamins, but I like the flavor and color of the traditional recipe. Still, omit the baking soda if you wish. (Similarly, there may be more retention of vitamins by using a pressure cooker, but I'm not prepared to do that, either.)

I would have liked to have tried the version in the rice cooker using frozen black-eyed peas (they have less salt than canned), but wasn't able to find them in my local grocery today, and hadn't taken my advice below.

If you cook a pound or two of black-eyed peas and then freeze them in batches, you can make waakye faster since the peas will not need to be pre-cooked for any of the version. Just use 1 1/2 - 2 cups of cooked beans in place of the 1 cup uncooked. 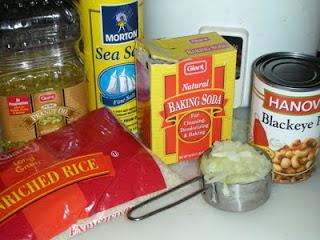 I could have mentioned that instead of cooking the oil and onion in the rice, sometimes people just saute a little onion in oil and pour it over the rice.

I like the idea of cooking and freezing the beans. it sure cuts down the time it takes to cook waakye