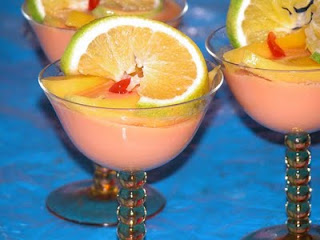 Ghana is not a country particularly big on desserts. But a classic fruit-based one in Ghana (and other parts of English-speaking countries of Africa), is the "fool," which in North America nowadays usually means a mixture of whipped cream and crushed fruit. In Ghana, it means a custard mixed with crushed, and usually cooked, fresh fruit like mango, papaya, or soursop.

It's interesting that my 1970s edition of the Joy of Cooking says of fruit fools that "long ago the word 'fool' was used as a term of endearment." Others claim it comes from the French word "fouler," which means to mash or crush, while according to The Food Timeline, citing the Oxford English Dictionary, a more accurate explanation of its origin is likely its link to the "trifle," or "a bit of foolishness." 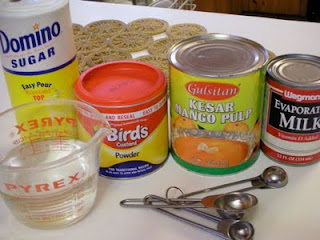 I was taught to make a fool using "Bird's custard powder," invented in 1837 by the English Chemist Alfred Bird, and containing cornflour, salt, vanilla, and annatto (for color). In Ghana we used evaporated milk, as in this recipe. It can also be made using a custard containing eggs, and instead of milk, coconut milk can be substituted. But the recipe here is adapted from the papaya fool we made in Ghana and shown in the photo above.

I picked up a papaya from the supermarket today, but it is nowhere near ripe, so I decided to make a mango fool instead. It is also hard to get ripe sweet mangos here in central Pennslvania, so I substituted mango pulp from India (see the can in the photo),  which also meant eliminating the preliminary steps of peeling chopping, pureeing, and cooking the fruit. However, the canned pulp also has sugar added, which made for a somewhat sweeter fool than would be common in Ghana. Today I'll just go step by step with the process I used, and later, when it ripens, I'll explain how to use fresh papaya to make a "pawpaw" fool. 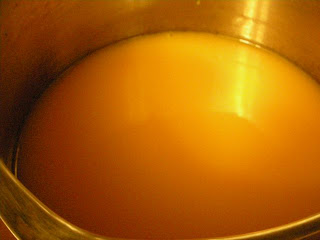 Pour 1 3/4 cups mango puree into a saucepan and set aside. 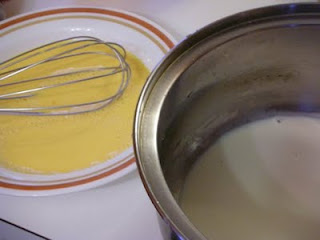 Shake the evaporated milk can, then open it and add 1/4 cup into a bowl, along with 1/4 cup water and the 3 1/2 Tablespoons custard powder (this is slightly less than 1/4 cup).
In a separate pan, slightly heat the remaining 1/4 cup of evaporated milk, then stir it into the water/milk/custard powder mix to prevent the custard from forming lumps.
Turn a burner on the stove to medium low and begin heating the mango puree. Stir it to make sure it does not stick.
Place the custard pan over another burner and cook the custard several minutes on medium low heat, stirring constantly with a wire whisk until it thickens. Remove from the heat. If it seems very thick, stir in a few Tablespoons of water (I needed to do this today), and let it cool for about 10 minutes.
Using a whisk, gradually mix the custard into the heated mango puree, stirring vigorously and letting it cook for a few minutes. Do not add any additional sugar. 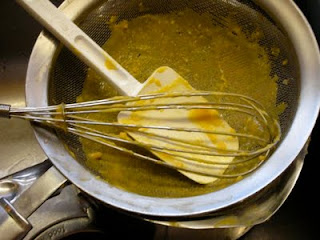 I thought I would not need to do the final step we took in Ghana, which was straining the fool into a bowl, but I did have lumps in my fruit/custard mix, and needed to pour the whole thing through a strainer. 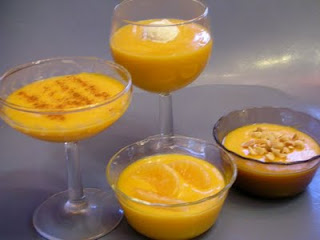 All that I could find in the house to garnish the fool with was: some chopped peanuts, a little cinnamon, some mandarin orange slices, and a some whipped topping. My husband added evaporated milk to his tonight, and said he found it a little too sweet. Other garnishes include orange/mango slices/cherries as in the photo above. The fool can be chilled before serving, and Barbara likes to soft freeze her fool sometimes, which is how we ate ours for dessert tonight. It is best made the same day it is served, though fresh fruit can be prepared a day ahead. NOTE: I imagine one could also use a custard pudding mix to speed things up, but in the U.S., the puddings tend to be quite sweet. As I mentioned earlier, the fruit could also be mixed in with whipped cream for a North American version.
Posted by Fran at 9:14 PM

Yummy... I have been wondering what I should make with Bird's Custard, apart from banana custard!