Today is my son-in-law's first official Father's Day (his Kumiwah is 3+ months old), and this post is dedicated to him. 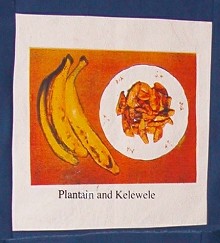 I have frequently mentioned my own love of kelewele, a wonderful Ghanaian snack. Koranteng, however,  is a a real kelewele connoisseur. The international wedding quilt we assembled for him and Abena in 2005 included a square from Ghana featuring his beloved plantain favorite. He also has a photo online from a Christmas feast at home in Ghana in 2009 that prominently displays some cubes of kelewele.

Whenever one  stops by his apartment in Berkeley, one always finds several plantains in various stages of ripening until he deigns them properly ready to be transformed. He expertly peels and slices the plantains, then portions out some of his  treasured "Maame's" kelewele spice mix prepared in large batches for him in Ghana, and brought periodically to California by visiting family members. 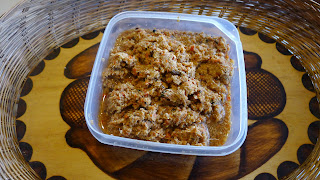 While I have not attempted to obtain the exact ingredients in "Maame's" special mixture, combining my taste experiences enjoying it with my time in Barbara Baeta's test kitchen in Ghana, I'm developing my own version. I happen to really like fresh ginger, plus I've borrowed Maame's use of fresh habenero peppers to replace dried red pepper, and I've used onion generously as well (too generously for the first unsuccessful batch). Feel free to tone down or even omit spices if you prefer a milder or simpler version. 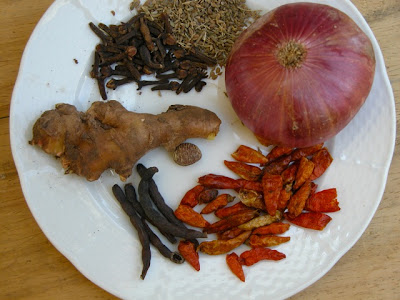 First, assemble the ingredients. If you look carefully at the photo of the ingredients taken in Ghana when I first made kelewele, you'll see in the very center of the plate a small oval-shaped spice. I'm not sure what that was as I did not include it in my notes, but have decided to try using a little nutmeg to flavor the spice mixture, along with salt, aniseed, cloves, ginger, onion, red pepper, and hewntia.

So, here is Fran's  gourmet version of kelewele.

Well, it's several testing hours later, and I still only have an in-progress working recipe. I thought it would be easy, but you know, it seldom is on the first try. My initial attempt had way too much onion, not enough aniseed or ginger. Plus, I did it all by hand: ground the hard spices in a marble mortar and pestle, finely grated the onion and ginger by hand, and blended the fresh hot pepper coarsely in an electric blender, then finished it in the marble mortar. Lots of work, but as soon as I coated the ripe plantain and put it in the deep fryer, I knew I had too much onion.

For the second effort, I adjusted amounts and coasrely chopped the ginger and onion and broke the hwentia into pieces, then simply ground everything in an electric blender with a couple of tablespoons of water (using an inverted glass canning jar since I learned that they'll fit on most blenders). Better, but when I coated the plantain before frying it, the coating was stringy and stuck in clumps onto the cut-up plantain.

The 3rd time I squeezed out the coarse fibers and just used some of the liquid to coat the plantains, and this seemed to work best.

However, on top of everything else, part of the secret in making good kelewele is having the plantains ripe enough, so the sweetness comes through and they kind of carmellize on the outside. It's hard to come by properly ripened plantains in central Pennsylvania, and I had to use some that were not quite ready, so that added to the difficulty.

However, here are my step-by-step directions to date. Feel free to give me any feedback on the recipe. 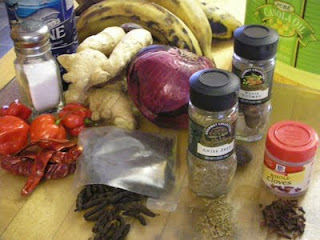 1. Assemble ingredients:  You'll need several ounces of fresh ginger (say, 2 to 4 oz), a teaspoon of anise seed, about 1/4 teaspoon salt (or more to taste), 1 teaspoon whole cloves, about 1/4 teaspoon nutmeg (optional), about 3 or 4 sticks hwentia (to be purchased online or at a West African grocery), part of a yellow or red onion (to get a couple of tablespoons), and a fresh red habanero or dried red pepper flakes or ground red pepper, to taste (I'd start with about half a teaspoon and add more the spicier you like it), 4 slightly over-ripe plantains (will be somewhat black and soft, but not completely). 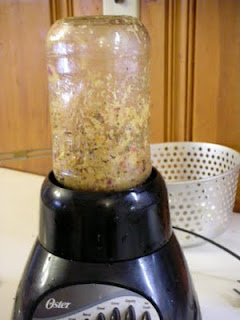 2. The easiest way to make the seasoning mixture is to grind the ingredients together (except for the plantains!): peel and chop a little onion coarsely (to get a couple of tablespoons), peel and coarsely chop a few ounces of fresh ginger (I don't recommend using dried ground ginger), some red pepper, fresh or dried as explained above (if using fresh, cut off the top and make sure the seeds are not black; for a milder flavor, remove the seeds and membranes before adding to the blender, using a small container like a canning jar (it's easier to blend them in a smaller container), 3 or 4 broken sticks of hwentia (adds a spicy, peppery, but not hot, flavor), and 2 or 3 tablespoons of water. You may need to remove the jar and shake it then replace it a few times to blend the seasonings completely.If you  use a regular blender containert, you'll probably need to stop several times and use a rubber spatula to push the mixture down as you blend it. 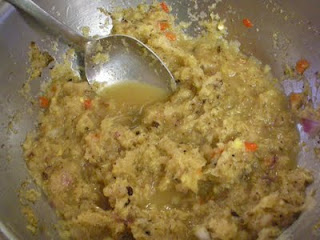 Pour the seasoning mixture into a small bowl and let it sit while you peel and cut the plantains.As I mentioned, the third time I made this, I squeezed out the fibrous strings and used mostly the seasoned liquid left behind (Koranteng, or any other kelewele experts, if you're reading this, maybe you can comment on how much of the spice mixture to use for about 4 plantains? Also, do you ever have problems with clumping of the seasonings?) 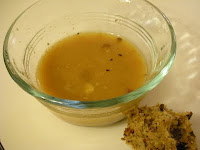 Prepare the plantains. I usually cut off each end, then make a slit along one side to peel the plantain, cut the plantain in half lengthwise, the cut each half as below. 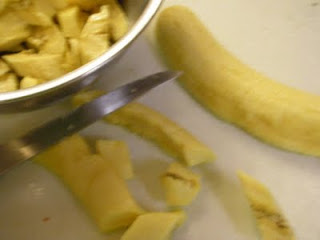 Sprinkle a few tablespoons of the seasoning mixture over the plantains and stir well to coat. Let them sit for several minutes while you heat up oil in a deep fryer or heavy-bottomed pan to about  350 degrees F. Make sure the oil will not bubble over when you begin adding the plantains. Use a long-handled slotted spoon (my son-in-law has a fancy deep-fryer with a lid; I just use a simple deep-fryer without a basket. A frying pan or other pan would also work). Cook them in several batches, stirring to make sure they do not stick together.

When they are nicely browned on all sides, remove and drain them on paper towels. Plantains can be eaten with bean stew, but I prefer them with dry roasted peanuts.They're best eaten immediately or soon after cooking. 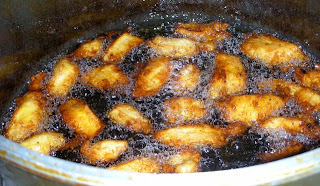 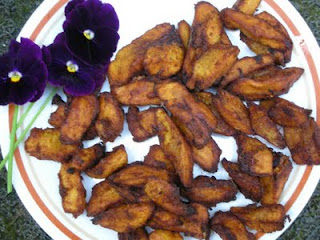 P.S. Here's a photo taken a few weeks ago while I was in Berkeley of one of the glorious kelewele batches Koranteng prepared for us: 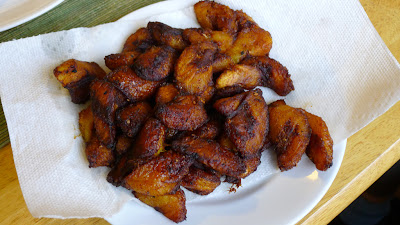 I make mine by grinding ginger garlic /onion/scotch bonnet/season-all/black pepper with some oil/water. I chop soft ripe plantains and coat them with the mixture and then coat everything with coconut oil. Put it all on a well oiled foil-covered tray and bake it in the oven. That's my version.

Thank you for sharing it.