Wonderful ways with coconut: recipes #54 and 55 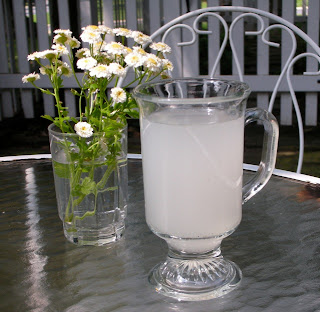 I have enthused about the noble coconut in previous posts, such as recipe #13, and given instructions on how to open them as well. Starting today I'll expand on the topic with several coconut-themed recipes.
Let's begin with a wonderful refreshing drink, simple chilled coconut water. The coconut water is the liquid inside the young coconut before it matures, and is enjoyed in many tropical countries--for me, mostly that means Brazil and Ghana. It is found both in young green coconuts, and the more common brown-skinned ones available in grocery stores in North America. It has become something of a fad drink recently in the U.S., where its health benefits are increasingly being exalted and it is hailed as a sports, anti-aging  wonder drink. It is available in canned form, but is easy to obtain directly from a coconut. Locally, a fresh (brown-haired) coconut costs about $2. If you can get a fresh green coconut, so much the better. However, a brown one will also provide coconut cream, coconut milk, and coconut fiber for baking.
Recipe #54 Refreshing Chilled Coconut Water
Chill a fresh coconut in the refrigerator if you want to drink the coconut water immediately when you remove it. Of course, if you have a straw, a spoon, and a fresh young green coconut, all you need to do is whack off the top of the coconut (not as simple as it sounds without a machete), insert a straw, and enjoy. Use a spoon or a piece of the shell to scrape the soft gelatinous substance inside and eat it straight from the coconut. 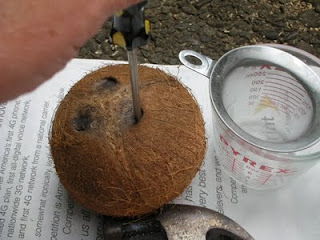 However, those of us living outside of tropical climes or far from well-stocked markets can still enjoy sweet coconut water.

First, assemble some newspaper; a hammer; a sharp clean object like an ice pick, nail or screwdriver [alternatively, I've heard a corkscrew also works]; a measuring cup or similar cup that holds at least 1 cup of liquid; and a fine mesh strainer that will fit over the cup. Remember when you buy your coconut to shake several of them first: the more liquid sloshing around inside, the better. I had to go to two stores before I found one I liked for this blog posting. 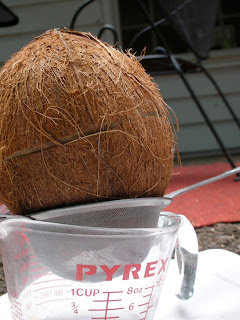 Set the strainer over the measuring cup, then use the hammer and the ice pick to poke through each of the three eyes of the coconut. Wiggle the ice pick or screwdriver, etc. in each of the holes to enlarge them a little then turn the coconut upside down and let the liquid drain directly into the cup. You may like to pour it through the strainer again as you pour it into a glass. My coconut yielded about 2/3 cup of delicious coconut water as you can see in the photo at the top of this blog posting. Head outside to the patio and enjoy (or refrigerate until you have time to take a break).!


Alternatively, if you prefer you can use the coconut water  in making your own coconut cream and coconut milk to further use in recipes for things like  coconut rice  (recipe #56) or a coconut smoothie (recipe #57), both forthcoming recipes in the next day or two.
Recipe #55: Coconut Cream and Coconut milk
Coconut milk has many uses. Some people (like my daughter Abena) with cow's milk allergies may find it helpful to prepare coconut milk that they can use as a substitute. It is also a wonderful rich addition to rice or some stews.
There are several ways to prepare coconut milk. In earlier years, I laboriously grated the coconut, poured boiling water or it, then strained it. Nowadays, it's much easier to enlist the help of a good blender, if you have one. 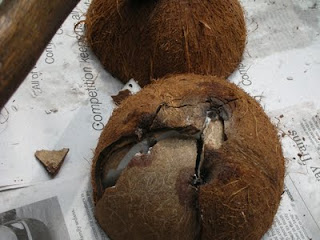 Let's return to the coconut above after draining out the coconut water. I assume you've already found a hard surface to spread out the newspapers on (usually the patio or cement garage floor for me). Begin hitting the coconut with the hammer until it breaks open, then keep hitting it until much of the hard outer shell has broken off from the meat. Carefully use a table knife to pry off the  rest of the shell. 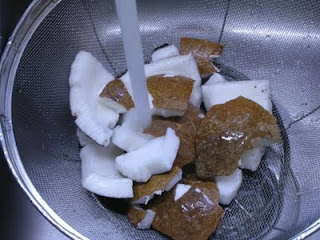 Rinse the coconut meat under water and discard the outer shell. While you want to leave the brown skin on the meat alone, you want to make sure to remove all the hard bits of shell or you may break your blender during the next step. 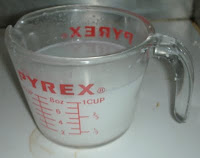 Add about a half cup of water to the coconut water you obtained when you first drained out the coconut and heat the mixture to almost boiling (in a microwave if you have one). Chop or break the coconut meat into small pieces in a bowl. Using a blender, add some of the coconut meat with about a third or more of the hot water mixture, and begin blending it. Repeat this process until all of the coconut is ground up. This step took me about 10 minutes, repeatedly adding small amounts of coconut and liquid, mixing it up and pushing it down as I progressed (perhaps a food processor would work better?). I was afraid my blender might overheat, so I periodically turned it off to cool as I worked. Heat up a little more water and add it if necessary to get the coconut well blended. 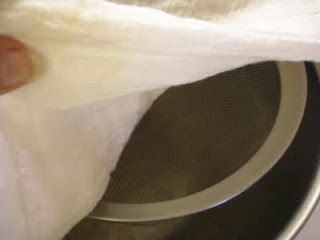 Set a strainer over a bowl (I used a stainless steel bowl), and line it with a piece of folded cheesecloth, then pour the mixture from the blender container onto it. Use a spatula to scrape out as much of the coconut mixture as possible.

Gather up the edges of the cheesecloth and twist and squeeze it until as much of the liquid is removed as possible. This is your first, and richest coconut milk/cream mixture. Pour it into a jar.  If you were raised to be thrifty (like me), you 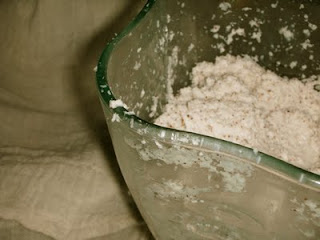 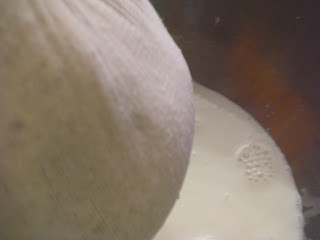 can take another cup of water, use it to rinse out any dregs in the blender container, spatula, etc., and also heat it to almost boiling. Spread out the cheesecloth over the strainer again, and pour the liquid over the chaff in the cheesecloth, again squeezing and twisting the cloth to remove as much liquid as possible. Pour this into another jar, and you have your "light" coconut milk. It is possible to repeat this process a third time, getting, obviously, a progressively weaker coconut milk each time.

Freeze the coconut chaff for use in baking to add flavor and fiber.

If you put the 2 jars in the refrigerator you'll see the coconut cream rise to the top. The first batch of coconut milk will have the most cream. In cooking, the cream may be used like any cream, or you can shake or mix the cream to add it into the milk. 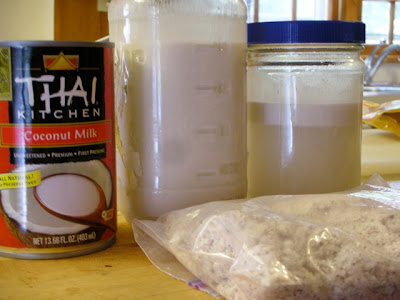 Sooooo, if you're a purist, or you want to reduce your carbon footprint, or avoid any additives in your food  (the canned versions tend to have guar gum added as an emulsifier), or, want to save money (coconut water, milk, cream, and chaff from a single coconut), or  just experience the joy of "cooking from scratch," I recommend savoring home-made coconut water/milk/cream!
Posted by Fran at 3:56 PM

VERY informative! Thank you! I have always wondered how to make the milk and cream from the coconut. As I hope to be moving to Ghana within the next year (and am currently a culinary student in the states)this could prove useful for concocting my own creations!

Glad you found it helpful, Mary. I'd love to hear from you at fran@betumi.com to learn more about your plans to be (and work?) in Ghana.

Fran - try a Vita Coco! It's 100% natural, is never from concentrate, and only has one ingredient (coconut water)! Drinking a Vita Coco is the closest you can get to slicing open the baby green coconut yourself!

Thanks for the heads up, Allison. I'm sure those who can't find/don't want to make it themselves will check out vitacoco.com