Question 3: How can there be cuisine where there is so much chaos: starvation, wars, corruption, malnutrition, AIDS? 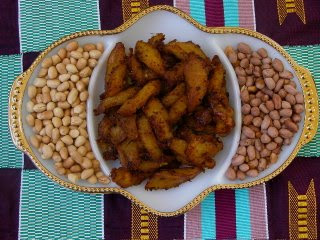 The media image of African society in the U.S., including its food, has been almost uniformly negative. Africa's Media Image, a book published in 1992 and edited by Beverly Hawk examined why this consistently superficial, stereotypic and negative image has come to be. It includes commercial criteria (e.g., the under-representation of media resources on the continent [in 1986, 31% of newspaper correspondents were stationed in Europe compared to 8% in Africa], p. 17, presumably because Africa does not "generate attractive revenues") and the focus on the sensational such as war, famine, and AIDS; political criteria (this has to do with "power" issues, and traditionally African countries have been viewed as largely insignificant), perhaps excluding the immediate independence years of the late 1950s and early 1960s coinciding with the Civil Rights Movement in the U.S., when Africa was briefly fashionable, or in the 1990s when Nelson Mandela was elected President in South Africa; sociolcultural criteria, where American news correspondents have been largely insensitive to cultural nuances in African countries (there are exceptions, such as Lydia Polgreen of the New York Times). In 2005, The Africa Channel was created to counteract the superficial and negative-biased coverage available in the U.S. On the radio, a similar effort is being made via "Africa and the World." In addition, there has been the emergence of a number of African bloggers, both male and female, (including, notably Emeka Okafor whose influential Africa Unchained and Timbuku Chronicles and the links on his sites aim to showcase the faces of Africa that are too often invisible in U.S. media.

Many parts of Africa are going through struggles with poverty and social upheaval. We should not ignore the reality of these challenges, and must try to understand corruption and greed and respond to problems in Darfur or the Nigerian Delta or Ethiopia. However, that is, once again, only a piece of the story. 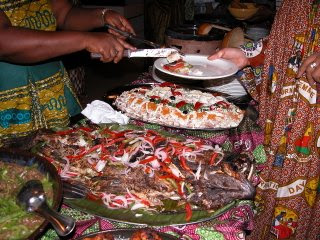 When I was a student at the University of California in Berkeley during the upheaval of the 1960s and 1970s my parents saw news stories and were sure my life was in danger because Patty Hearst had been abducted near when I lived, or the campus had been shut down during a protest over the Vietnam War or a conflict over "People's Park." The sensatonal media portrayal was completely divorced from the reality of day-to-day life.

In addition, though India, China, or Ireland have all suffered times of famine, we do not assume they have no great culinary traditions. Throughout Africa, people still celebrate births with outdoorings and naming ceremonies, along with marriages, engagements, holidays, initiations, festivals and funerals. People like to eat the food they consider good when they have the resources to eat what they want. Why should Africans somehow be different? The claims that Sub-Saharan African cuisines are "neither rich nor complex" (Elisabeth Rozin), or are "low" (as opposed to "high") (Jack Goody), will be tackled in the next posting.

It was interesting to see a couple scenes with food from Botswana on the new HBO series the No 1 Lady's Detective featuring Jill Scott. They have not shown any festival settings, though with food. So far, there are scenes in fancy restaurants and in people's homes, but only one close up on the food being consumed by an African American visitor who winces a little at some white mush (?) she is given.