Questions 1: Is there an "African" cuisine? 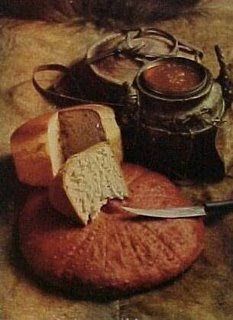 The word cuisine is often used to imply a cooking style that is somehow sophisticated and skilled and elaborate, as in haute cuisine. It seems everything sounds fancier to English speakers when said in French, even though the word literally means "kitchen." Technically, cuisine just refers to the way food is prepared and/or the food itself. Somehow the question above sounds a lot less profound when phrased as "Is there such a thing as 'African cooking' ?"

It is said that when the renowned South African food writer Laurens van der Post was approached in the 1960s to write the Russian volume of the ambitious Time-Life "Foods of the World" series, he was suffering from a medical condition that prevented him from using his hands to write. Instead, he offered the editors an alternate suggestion: that he travel the continent and do the one on Africa (dictating his notes, I believe). Apparently the editors of the series were stunned: they had no idea there was such a thing as "cuisine" in Africa, and had no plans for such a book in their "comprehensive" series. Van der Post assured them it existed, convinced them, and set out to write the landmark African Cooking, the first book I've seen published in the U.S. that takes African gastronomy seriously (another French word!). While it is has some flaws, van der Post's book includes carefully researched recipes and fabulous photography. Its chapters highlight history, culture and geography of: "The Ancient World of Ethiopia," "New Cuisines for New Nations" (i.e., West Africa), "In the Highlands of East Africa," "The World of Portuguese Africa" (i.e., Angola and Mozambique), and, not surprisingly given his roots, three chapters on South Africa--actually, four, if you include the introductory chapter "My Continent: A Personal View," "East and West Meet at the Cape," "Great Cooking from Rich Farms," and "On the Track of the Voortrekkers".

As this suggests, there is no single "cuisine," but rather rather multiple cuisines throughout the continent. As Europe is not a single country with but one cuisine, so Africa has many flavors and ingredients and cooking techniques. While North Americans would generally not merge Italian, Swedish, Spanish, English, German, French and Portuguese flavor palates to a single "European cuisine," it is often considered that "Africa" has only one "kitchen." There are many kitchens, given the 53 countries of the continent. While each country has its own regional and ethnic variations, geography and history, it is possible to divide the continent into 5 general geographic regions: north, south, west, central and east. Eastern Africa is often subdivided into the countries of "The Horn of Africa" (the northeast countries of Ethiopia, Eritrea, Djibouti, and Somalia), and the rest of East Africa. Another approach is that of van der Post to consider countries speaking the same language of their former colonizers, as he did for Angola and Mozambique. Also, people usually make distinctions between the food and culture of countries north or south of the Sahara Desert.

Africa has made numerous global culinary contributions already, and still has an immense repertoire to offer the rest of the world. Its cuisines have, in turn, been heavily influenced by other religions and people from other countries, including, for example, Malaysians, Indians, French, British, Portuguese, or people from the Arabian peninsula.

In addition, food tastes are constantly evolving and changing. For example, in the U.S. there is fusion and "California" cuisine. When Laurens van der Post went to the newly independent countries of West Africa in the 1960s, he rejoiced that he found "a rapidly expanding middle class," whose experimentation and exploration in the kitchen he described as having "a kind of morning freshness" a "taste. . .exhilarating and exploratory" and marked by a "lively" inventiveness, with meals ". . . that stimulate not only the palate but the mind." (African Cooking, p. 62)

In summary, the answer to the question is "no," there is no African cuisine. But, yes, there are numerous exciting and flavorful African cuisines to discover. As Lydia Polgreen wrote in an article in the New York Times on February 1, 2006, "People travel to Africa for history and for scenery but never the food. I don't get it . . . Africa, with thousands of languages and cultures, each with its own cuisine, always rewards an adventurous eater." I heartily second her opinion.

Tomorrow's question: Is there really much of a difference between "African" and "African-American" cuisines? 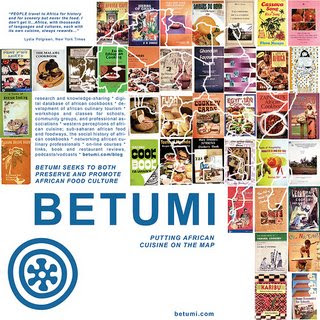 interesting! but you rather downplay the fact that africa has far greater diversity linguistically, culturally and thus probably gastronomically than any other continent. in most of asia (north and south) rice is the staple. in parts of africa it is rice or sweet potatoes, or cassava or green banana or maize meal.

Enjoyed the post, and I would add that while there are some distinct differences in the cuisines of sub saharan africa, i have seen many of the same cooking techniques and preparatory skills (and African cooks are highly skilled with their hands) used in West Africa, Central Africa, Southern Africa, and Eastern Africa. Even many staple dishes are similar, adapted to use the local leaves, oils, meats, nuts and fruits. I would be curious to see if anyone has pinpointed the origins of some of these techniques and common dish variations.