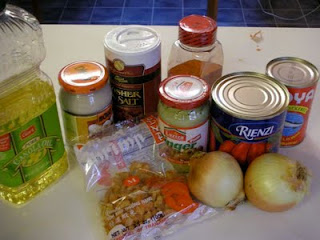 I've written about shito before, as in an article first published in Gastronomica. In much of Ghana it's as ubiquitous as ketchup was to my father's generation in the U.S. Shito literally means "pepper" in the Ga language, and can refer to peppers, or the hot sauce/condiment itself (also called shitor, or shito din [dark pepper]) which includes dried peppers, dried shrimps and sometimes small dried herrings as well as onion, tomato, and other seasonings.

The coastal Ga people eat a lot of fish, fresh and dried.I first lived in Nungua in the early 1970s, which is a Ga area. Ga kenkey (komi) in Nungua was generally eaten with shito and fried fish. I've always assumed shito was a Ga invention (aka black pepper, "engine oil, " students' pepper sauce). It was especially popular with boarding school students, probably because it goes well with both kenkey and gari, filling and inexpensive foods.

In Twi the word for pepper is mako, so it might be called mako tuntum (black or dark pepper). In Robert Sietsema’s article “Foo-foo Fundamentals” in the October 2005 issue of Gourmet he suggested it might be called "black pepper" because it included grains of paradise. I've no idea how he came up with that interpretation. I've never heard of melegueta peppers (Aframomum melegueta) being included in it. I think, rather, it's called "black" because you cook all of the liquid out of it with very slow cooking, which means it will keep for a very long time without refrigeration, and it turns quite dark.


Pounding is of course a very common processing technique in Ghana, so the traditional pounding of the dried peppers and dried fish is consistent with the cooking techniques throughout the region, and provides the texture I've always valued. Onions, peppers, and tomatoes are of course "the ingredients." Ghanaians are inordinately fond of tomato paste, and often include it. I don't know of other places that make a similar sauce around the world, and would love to know if there are. 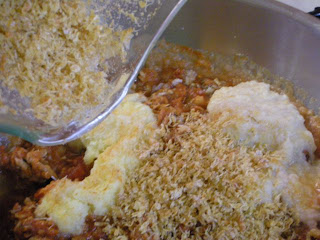 It's interesting that the recipe for this has been pretty much an oral tradition up until recently. None of the earliest cookbooks I have include recipes for it. However, Dorinda Hafner included a recipe in her book A Taste of Africa, and more recently I saw one in a "people's" cookbook by Vivian Ofori that I picked up in an outdoor market in Accra in 2008. (Recipe Book for All [Catering]). Also, Marian Shardow in the U.K. included a recipe for it in her self-published A Taste of Hospitality: Authentic Ghanaian Cookery, a few years ago. Plus, there are a number of online recipes now.

However, it saddens me to see how often imported tabasco sauce is found on restaurant tables in Ghana these days.

I also note with amusement that one of the main ingredients, dried shrimp, have been recently "discovered" to have great value for providing that magical "5th sense" umami. Maybe there is another link between Chinese and West African cuisines to look at?

At any rate, I confess that while I can make shito, it is a somewhat complicated and time-consuming process so I often opt out and substitute off-the-shelf Asian chili sauces. But I've been wanting to make shito recently. I emailed my friend and colleague Gloria Mensah
who is an amazing no-nonsense, efficient, single mom who knows how to adapt traditional recipes to the 21st century. She once told me she baked shito in large batches in the oven and also that she substituted canned mackerel for the dried herrings. She responded that she now makes shito in a crock-pot (that sits outside for a day or a day-and-a-half) because it used to smell up her house so badly.

I eagerly asked for the recipe and she gave me the basics. My version is outside cooking now, and I'm excited. She's added a number of short cuts that make it much easier to prepare, and I've made a few more. 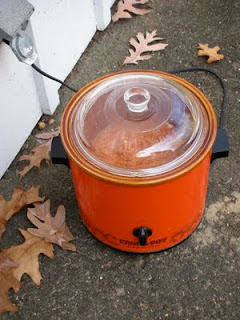 Here are a couple of pictures to whet your appetite. I'll post the recipe and results very soon. Incidentally, I placed salt in the picture of the ingredients, which was probably a mistake. Just ignore that for now. I'm not sure we'll need to add any. Along with substituting canned mackerel, Gloria also uses ginger paste and garlic paste from an Indian market to eliminate making them from scratch. Another time saver for me, was the ability to purchase Thai dried shrimp from the local international market--Gloria said she has to dry her own in the oven first before grinding them.

Thanks for the recipe, we have a local West African food market...Palm Oil,dried fish, dried shrimp, etc.

How you are talking about the similarity between oriental food n west African food is so true! im from far east n i find Ghanaian food so familiar, yet so different. However, its a little funny you talk about Chinese here when mentioning "umami" coz the word is Japanese...

Thank you for your comment, Maya. You're right to point out that "umami" is a Japanese word ("good flavor," "good taste.") I meant to type "Asian," not "Chinese." Thanks for catching my error.

My mom is the best good. She taught me how to make black pepper simply by frying about 200mls smoothly blended onion in lots of oil. The oil will preserve the pepper. Add some salt, then fry till there's is little moisture. Then add pepper as per your discretion and stirr. Add one cup powdered shrimps and stir for a while. Now u add 11/2 powdered dry fish. Careful u dont fry for too long, just when its turning dark else it will burn and turn sour. It still cooks even when its off fire. N.B- u could put a little blend a little ginger with the onion. Cheers

Thank you for sharing your recipe BayTso. It makes me want some kenkey to go with it!