When I was in Northern Ghana I watched kuli-kuli being made (and helped a very little--the women laughed at how weak my hands were when I tried to squeeze the peanut [groundnut] paste into balls) it seemed pretty straightforward. That's like saying pounding fufu correctly is easy. Not true. 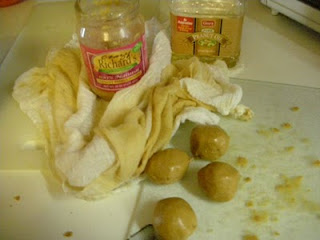 I'm working on developing the recipe for tankora (or "yaji") powder. Tankora powder is a West African rub for meats, poultry, etc. that is most famously used in West African kebabs. Like curry powders, it's a blend of several dried, powdered ingredients. There are many versions, but most commonly they contain dried, powdered red pepper, ginger, some kind of black or white pepper or masoro, salt, powdered peanuts specially prepared (that's the kuli-kuli I've been trying to master), and various other spices: some call for mace, or cloves, maggi cubes, garlic, and in Ghana people commonly mix toasted corn flour into the mixture as well. One of the best kebabs (called chichinga or  tsitsinga) I had in Ghana was made from tender beef (often chichinga is made from very tough meats and quite chewy and overcooked to Western palates), and the vendor (from the North) told me he made his own tankora powder that included: white pepper, sweet green dried pepper powder (the only time I've ever heard of that in tankora or yaji powder), dried powdered ginger, ground nutmeg, Maggi and Royco shrimp seasoning cubes, salt, kulikuli, and dried red pepper. 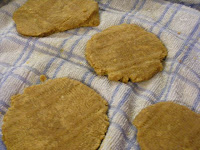 But making the kulikuli powder: that's the problem. I admit I'm not grinding the roasted peanuts fresh, but trying to use natural style peanut butter (I've tried different brands). Getting all of the oil possible out is the first step. I tried using my hands and a little hot water like they did in Ghana, but that didn't work, so I tried using a folded cheesecloth to squeeze out the oil, but that still didn't work well enough, so I wrapped the peanut butter in dishcloths, put it between 2 cutting boards, and stomped on it. That seemed to work! I got the oil out of the peanut butter, and was able to form the balls like they did in Ghana (or so I thought). As soon as I tried to deepfry them in peanut oil they disintegrated. I tried again today, making sure I had the oil hot enough, but the same thing happened, so I decided to make the balls into patties and fry them on a nonstick griddle well greased with peanut oil, at about 350-375 degrees. That worked okay, more or less. 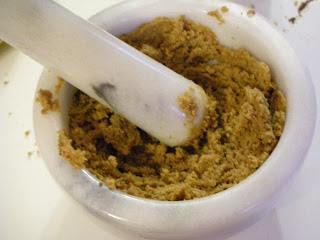 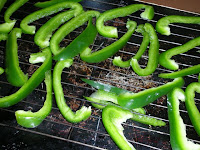 In Northern Ghana, they then add the salt (and maybe other spices, too?), and pound the balls again, t form them into rolled strips joined together and deepfry them again. I couldn't manage that, so just rolled them out and put them in a very low oven alongside the green pepper strips I'm drying to powder and add to my tankora powder, too.  Most of the recipes I've seen simply say to powder dry-roasted peanuts and use them that way. I don't want to cave in and do that until I have no other choice. I'll let you know tomorrow how it worked out. If the oven will dry out the "kulikuli" enough to powder it, and if I can get the sweet bell peppers dry enough to grind, tomorrow I'll see if you can really make a proper toasted cornmeal from popcorn. Keep in touch!
Posted by Fran at 2:32 PM

I lived in Niger and loved kulikuli and yaji both! I never watched people make kulikuli since it wasn't really made in my area, but we certainly used a lot of yaji. It was mostly salt with equal parts tonka (red pepper) and ginger with a small magi cube. We'd sprinkle it on fried fish or boiled sweet potatoes, cassava or yam. It was so good. Good luck.

Oh wow!!!! A recipe for Kulikuli!!!! Amazing, I will have to try it! I haven't had these in 20 years since I was in Tamale. They used to sell them in hoop shapes, which helped them to stay put on a stick on the merchant's head. I used to eat them like crackers.