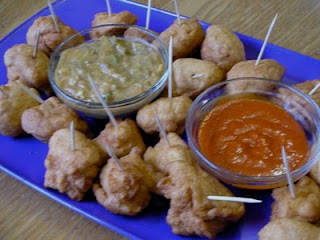 I've frequently alluded to the hugely popular West African bean paste fritter called akara (aka  kose, akla, accara, koose, kosai). A version that traveled to Brazil is called acarajé. Akara is commonly eaten as a snack or breakfast food. This dish, of course, has many variations. While Ghanaians like to take credit for it, it is also popular in Nigeria. Jessica Harris, in The Africa Cookbook, gives recipes for Nigerian versions  akara awon (with beans and okra), akara egusi (beans and ground egusi, or agushi, a kind of melon seed), and even cheese akara. 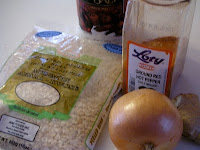 The first step in making this dish is to remove the skins from the black-eyed peas (the most common version in Ghana) and grind them. Yesterday I made a couple of batches using some "pre-hulled" black-eyed peas from Nigeria. I thought it would be a nice time-saver, but failed to notice the tiny pieces of stone in the package (I picked out the big ones), and ended up with gritty akara even after I rinsed and strained the beans. I remade the akara after first sifting out all those small sand-like bits of gravel, but still re-strained it before frying it, and it worked fine. 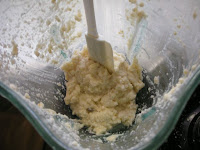 A number of online YouTube (with Chi-Chi)  videos (by Zukatrading) suggest using bean powder. (NOTE: the two videos I've linked to from here are for Nigerian-style akara, and omit the fresh ginger, plus are shallow-fat fried, and are larger and flatter and are made from a somewhat thinner batter than the Ghanaian version I'm posting). If bean flour is available, it certainly is a time saver. However, I have to say, for the best akara, I'll still go with de-hulling my own dried black-eyed peas (For a way to do this using a food processor, see BETUMI's YouTube video. It's also possible to omit removing the skins and just grind the beans unskinned, but, then, I'm a purist and that's not how akara is traditionally made. I sometimes skin a pound of black-eyed peas then store them in the freezer to use as I need them. I haven't tried frozen black-eyed peas, but that's another option. I usually use dried red pepper because it is easier to control the spiciness of the akara, but you can substitute a fresh chili pepper (for example, a green or red Scotch bonnet or habanero, seeded, or if you're really brave, whole).

I like to make small bite-sized akara to serve with toothpicks and dips as a party appetizer.

Begin with a cup of dried black-eyed peas. Pick them over, rinse, and soak them in about 3 or 4 cups of water for at least 30 minutes (when I used the pre-hulled cowpeas I let them pre-soak in warm water).

While they're soaking, prepare the other ingredients, and put the oil into a deep fryer (if you have one), or a large heavy kettle if you do not. Do not fill the kettle or fryer more than half full.

After you have removed the skins of the black-eyed peas, either by rubbing them between your hands to loosen them and floating them out of a large basin or using a food processor as described in the YouTube video above, drain the water off and put half of them into a blender or food processor and blend them until they are smooth. Use up to 1/4 cup water (necessary if using a standard blender) to grind the beans to a paste, regularly pushing them down the sides with a spatula to make sure they are thoroughly ground. This will take several minutes. 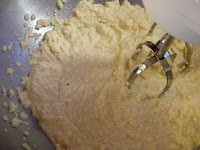 Empty the first batch into a bowl and repeat the process with the second half of the beans (including using up to 1/4 cup water again). When they are fairly well ground, add in the salt, onion, pepper and ginger and continue mixing until the paste is well blended.

By now you should begin heating the oil. In a deepfryer, set the temperature to 275 degrees Farenheit. On my stove, I need to alternate between a medium high and high heat.

Empty the bean paste into the same bowl as the first batch, and mix (I like to actually use a mixer, but a whisk or spoon could be used) until air is incorporated into the batter to make it light (think egg whites or whipped cream, though that's not a perfect analogy). It will take a couple of minutes.

Depending on the size you want, dip a long-handled teaspoon (for tiny balls) into the oil to coat it, then dip it into the paste. In Ghana skilled cooks drop the paste right into the oil, but I'm not that adept. I use one spoon, and quickly use another spoon to slip it off into the oil, repeating until the fryer is filled but not crowded. If the balls do not turn over by themselves, turn them over halfway. It will just take a few minutes until they are nicely browned. You can make between 2 and 3 dozen small balls from this recipe. If the balls fall down to the bottom of the pan, the oil is not hot enough, and if they brown immediately without having time to cook through to the center, the oil is too hot. I drain them on paper towels in a colander to cool.

The balls can be eaten warm or at room temperature, alone or with a dip. I often use hot sauce and/or a version of a peanut sauce--in the picture I had some leftover groundnut and okra stew, so we used that.

Tried to get the skins off the peas -no luck. Any other suggestions?

Did you soak the black-eyed peas for at least half an hour? Did you fill a bowl with them in it with water and rub a handful of them briskly between your palms? The skins should come right off and float to the top. Some people say to soak them longer, but I've never found that necessary, and in fact, heard that it makes for a wetter dough, which is not something you want for akara.

Great blog. I spent my last year in Ghana and wanted to try some Ghanaian foods at home. Your blog is very useful. Thanks.