Step-by-step: How to Crack Open a Coconut 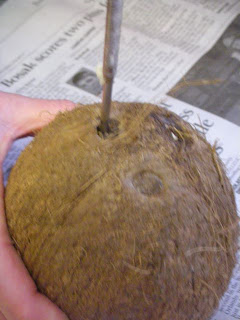 Last August when I listed Recipe 13 (corn and coconut snack) I  summarized the process of preparing your own coconut. In case you missed that summary, or want more detail, here is is.
This basic recipe is handy to know for many world cuisines, including African,  Brazilian, Asian and Indian ones. "Fresh" coconuts in North America mean the brown hairy ones with hard shells sold in the produce section. As I've explained before, in Ghana they call those "dried," and when they say "fresh" coconut, they mean the literally fresh green ones right off the trees, often sold with the tops whacked off in front of you with a machete. For those coconuts the inside is soft and melting and you can drink the coconut water right out of it, and scoop the meat up with a spoon or a piece of shell.
The basic equipment I use when preparing coconuts includes:
a hammer, an ice pick or similar sharp implement (I've used screw drivers, clean nails, and today the meat pick from a nut cracker set), newspapers, a cup, a knife and/or vegetable peeler. By the way, this is a fun activity to do with all ages of children and young adults--just be sure that they stand back when someone is pounding the shell in case of flying pieces. 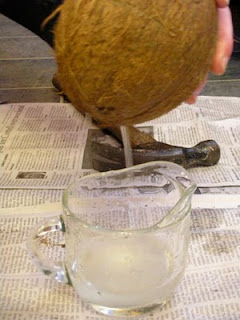 I usually crack open coconuts in my garage where I have a cement floor, but you can also do it inside if you prefer. Spread a few newspapers under the coconut and turn it up so you see the three eyes at one end. Place the ice pick or whatever you are using in the center of one of the eyes, and hammer it through the eye to make a hole. Wiggle it around to enlarge the hole and remove it. Repeat the process with the other 2 eyes. Turn the coconut over a glass, cup, or small pitcher and let the coconut water run into it. It's always good to get a "juicy" coconut (shake them in the store before you buy). Remember that this is NOT the coconut "milk." We'll talk about that another day. 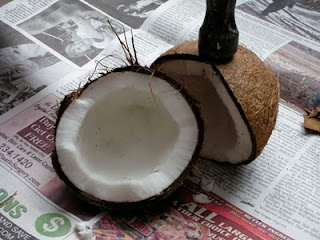 Once the liquid is out of the coconut, move the glass or cup away to a safe place, and begin hammering away at the coconut. Many times there will be a small line around the center of the coconut that has been made to make it easier to crack the coconut open. If there is such a line, aim at it or otherwise at the center (not the end where the eyes are or the other end). When the coconut begins cracking open, keep pounding away until many of the pieces of the white meat have broken off from the shell (they will have a brown coating on one side), and the rest can be pried off carefully with a knife. A vegetable  peeler will remove the brown skin from the coconut, which can be cut or broken into pieces and served that way, or grated or chopped into fruit salads or other recipes. 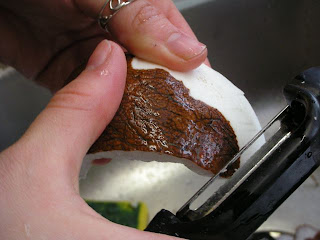 I needed coconut today when I was making some Ghanaian candy (toffee), including both peanut "cakes" (like peanut brittle) and 2 kinds of coconut "cakes." Those recipes will follow soon.
Posted by Fran at 5:55 PM

Can't wait for the recipes!

I do not speak Chinese (?). According to Google translate, this post means:
"Look at the blog to adjust mood, but also to continue to work, we refuel" I imagine that's a poor translation. Can someone help me out here? Thank you.

very good blog, congratulations
regard from Reus Catalunya
thank you

Unknown said...
This comment has been removed by the author.
8:55 AM