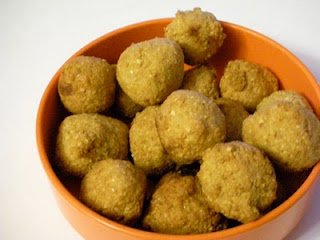 I feel pretty stupid today. After spending hours trying to use peanut butter to make my kuli-kuli (and wasting a LOT of peanut oil as they disintegrated in it), I decided to try beginning with dry roasted peanuts. I threw a cupful into my mini food processor and quickly ground them to a powder, stopping before it turned into a paste. Then I proceeded to wrap the powder in cloth, and press the oil out between 2 cutting boards (I actually put them on the floor and stomped on them). Next, I added a little hot water to allow me to mold the powder mixture into small balls (the cup of peanuts made 16 of them). I didn't add salt because the peanuts were already lightly salted. Then I deepfried them in hot peanut oil for a few minutes until they were crisp and brown on the outside. No problem. It was quick and oh-so-easy.

They're then ready to eat as a snack, or sprinkled crumbled over salads or porridges or whatever you fancy. Because I intended to crush the balls to use in my tankora powder for my chichinga (suya), I didn't add any other spices like grated onion or red pepper when I made the balls, but I could have done that, too.  I pounded the fried balls in a small marble mortar (see picture below), then pressed the pounded mixture through a medium sieve for the recipe below. I imagine it would have been easier to just use the powdered peanuts without frying or pressing them, but then, I'm a perfectionist of sorts. Do whichever you choose. 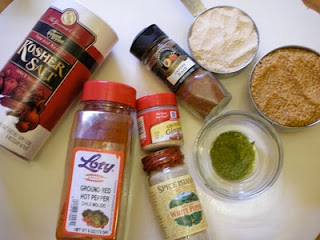 If you don't want to bother with the recipe below, you can make a "make-do" powder by mixing a little hot red pepper, and a little ginger and salt, and some crushed/powdered peanuts together. If you don't have a food processor, put peanuts between waxed paper or into a bag and hit them with a rolling pin, hammer, or meat tenderizer to pulverize them. 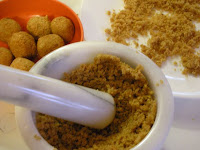 I actually made a double batch of this today so I can test it on 2 types of chichinga, one made from round steak (beef) and one from chicken breast. I'm getting ready to make the marinade for the meat now, and will grill it for dinner. I'll post the results tomorrow or the next day.

Next I prepared the other ingredients for the tankora (yaji) powder, the spice rub to use on my meat/poultry. Yesterday I dried a few rings of sweet bell pepper in a warm oven (the lowest setting on the oven for a few hours) and ground them in a coffee/spice grinder. I've only once had tankora powder with that ingredient, but I liked it. I also used mace because I had some handy. And I had no African black pepper, so I just used white pepper. I had African dried red pepper (hotter than the cayenne usually available in North American grocery stores), so I used that, along with dried ground ginger. 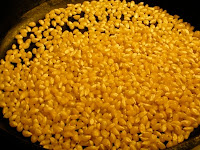 The toasted cornflour (the same one used to make Tom Brown porridge) was a little more of a challenge, but thanks to Dorinda Hafner's adivce in A Taste of Africa, I managed to make my own by toasting a cup of white popcorn in a preheated heavy cast iron skillet over a medium high heat, shaking it constantly for about 6 minutes until just before the kernals started popping (I quickly poured them onto a cool plate so that they didn't continue to heat and pop in the pan) and then ground them as finely as I could in my coffee grinder, pouring them through a fine tea strainer and regrinding the chaff until I had what I needed: still not quite as fine as I could have gotten in Ghana, but quite okay. I've seen people saying you can just toast  cornmeal in a dry frying pan, but, as always, I think freshly made is better. Mix all of the ingredients together.

I make this just before I need it, but I imagine it could also be stored in the freezer.
Posted by Fran at 4:43 PM

As an fyi, I need to increase the salt and ginger and red pepper in the mixture above, and I'm not sure how I felt about the mace.

Hmmmmm. It was the white pepper that had that strange taste (unlike white pepper I've used before), not the mace. The mace was fine. I substituted black pepper the 2nd time, and also adobo seasoning salt for the plain salt (and increased the amount). Much better!

I am making Kuli Kuli for the first time. I plan on grinding it up for Yaji, as you have done. Thanks so much for posting this recipe. This is the only recipe that I have found that has toasted corn flour. This is exactly the flavor I was looking for. I mill most of my own flour so I milled some dent corn and toasted the cornmeal. Perfect!! I have found a source for Uda or African Negro Pepper:

Really kind folks that run the website and they are located in Maryland. As such shipping is really cheap...

Thanks for your comments, Pat. I assume by "African Negro Pepper" you mean
"Ashanti pepper, Benin pepper, false cubeb, guinea cubeb, kale, masoro, sasema, and soro wisa," as those are the names they give their "uziza" pepper.

I have only know it to be called Uda or A.N.P. but I'm an American and have never met anyone that has made this before. I was given a sample from a friend of mine that used to be a missionary in Niger. We liked it so much that I thought that I'd put my chef skills to duplicating the flavors with items that are available here in the U.S.

As a matter of fact I started with blanched peanuts and was unable to press a sufficient amount of oil from the peanuts and as a result I was unable to make the Yaji that was my entire reason for making Kuli Kuli. If I were to have added the remaining spices to the ground Kuli Kuli it would have gone rancid from the excessive oil.

As such I've placed it in the freezer and will use that bathc for topping on salads and such.

I found a source for peanut flour last week and today I made another batch and it turned out perfect.

Pat, where did you find the peanut powder? I've only seen the sweetened kind.

Here is the link for the peanut powder on Amazon.

I tried to make the yaji the other day and I think that I added too much of the Uda pepper. I think that this is the same pepper that us used I the Yam & Pepper soup for new moms to help their body recover from child birth.

Anyway, it was a little bitter for my liking and the leftovers were quite bitter.

Next time I'll add more of the toasted cornmeal and less of the Uda and maybe even shake it through a sive to take any of the fibrous parts that did not get ground up well in my spice mill.