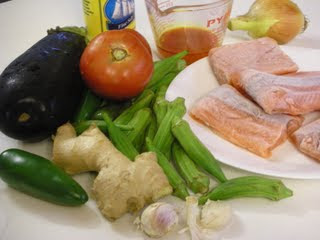 Banku is often eaten with a stew made from okra and/or garden eggs (a kind of eggplant, which is what is often substituted in the U.S.), and smoked and fresh fish. I especially love smoked mackerel, but my husband was recently placed on a low-sodium (salt) diet, so we had to omit that and go with fresh salmon instead. I confess I missed the lovely flavor smoked fish adds. We tried to compensate for that by serving it with a little bottled chili sauce since I did not have any "black pepper" (shito) on hand.

The ingredients I used included: a medium eggplant (to get several cups, peeled and chopped), a large really fresh tomato (or 2), or substitute canned if you must, a large onion, chopped, a jalapeno pepper (or a hotter variety, more, etc., to taste), about 1 1/2 dozen fresh okra, (or frozen), 4 salmon fillets, 2 large garlic cloves, a couple of tablespoons of red palm oil (or other vegetable oil), a little fresh, peeled ginger (to taste, try starting with an inch or so), and some salt.

Salmon would not be a traditional fish (whereas tilapia, tuna, or red snapper would), but I've often had salmon served in West African restaurants in the U.S., and it works fine, especially the wild type, which are meatier.

First wash and prepare the eggplant. Peel it and chop it into cubes, then put it in a saucepan and 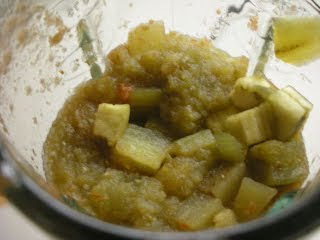 cover the eggplant with water. Cover the pan, bring it to a boil, then lower the heat and simmer it while you prepare the okra. If using fresh okra, rinse it, then trim both ends. According to your preference, you can 1) simply slice the okra into rounds, 2) chop it finely, 3) remove the seeds and slice it horizontally, 4) leave it whole. I generally chop it finely, unless I'm in a hurry, when I just slice it. When using frozen okra, I often leave it whole so it doesn't completely lose its body. 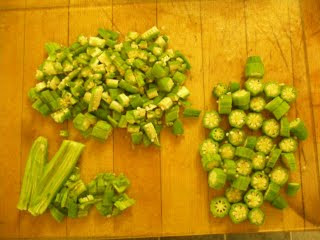 The stew can also be made with only one of the vegetables--either the okra, or the eggplant, but we like them combined, as they often are in Ghana. When the eggplant is soft, remove it with a slotted spoon and puree it in a blender or food processor. Set it aside.

Similarly, peel and coarsely chop the ginger and garlic and tomato and puree them with a little water in the same 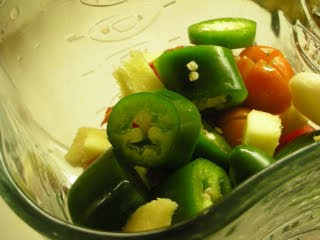 blender container. No need to rinse it first.

Peel and chop or slice the onion. In a large, heavy pot or pan heat a couple of tablespoons of oil (I used a seasoned red palm oil from Ghana called "zomi") and fry the chopped onion on a medium heat for a few minutes, then add the pureed pepper and tomato and garlic and ginger (if you're a perfectionist like me, you can strain out the seeds, or seed the peppers and/or tomatoes before putting them in the blender). Add the eggplant and fish, turning the fillets to coat them with the spices and vegetables, then add the okra and salt (to taste) and stir. If it's not spicy enough, add a little dried red chili pepper. Add a little water if the sauce seems too thick, cover it and lower the heat and simmer until the fish and okra are cooked. This stew also goes well with plain rice, and should serve 4 people. If you want more tomato flavor, add a spoonful of tomato paste. 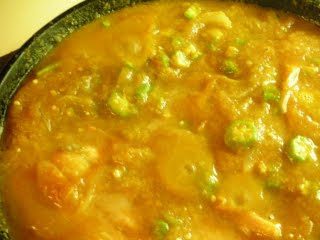 I would like to cook it, since I love okras and eggplants and I am familiar with their combination with fish (In Crete, we make a stew with chopped onions, tomatoes, eggplants, whole okras, dusky grouper and olive oil)

Unknown said...
This comment has been removed by the author.
2:45 PM

Unknown said...
This comment has been removed by the author.
2:46 PM

Dani, I'm not sure why my blog says I deleted your comment. I didn't! Here is what you said: Hi Betumi! I love your blog and love the way you detail your recipes and and the pics of your food. I like you,am married in to a Ghanian family and try to cook according to tradition. :) ....Can you please post some recipes for holiday treats for this time of the year? Especially sweets! thx

I love this blog! I also married a Ghanaian and am excited to surprise him with this Okro stew. Next I want to try your Shito recipe.

I wonder why these recipes seem more manageable when I read them here...when my husband explains them they sound so hard and time consuming! Thanks for the recipes, I love it!

Natasha, thank you for writing. Let me know how the stew turns out.

Fran said...
This comment has been removed by the author.
6:26 PM

Thank you for the recipes. I made banku for the first time. I had to get my husband to help me out with stirring it. It is quite a workout. The okra and eggplant stew turned out very nice as well.