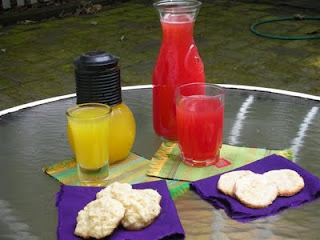 Last night I started experimenting making some cassava cookies (biscuits). I still need to work on that recipe, and intended to do so today, but it's turned out to be too hot to turn on the oven. I don't have air conditioning ;-)
Instead, I decided to whip up some refreshing homemade juices using watermelon and pineapple. These are great fun and easy recipes for families with children home for the summer. You can teach them that juice doesn't grow in cans and cartons. It comes from real fruit!
Recipe #71: Watermelon Juice 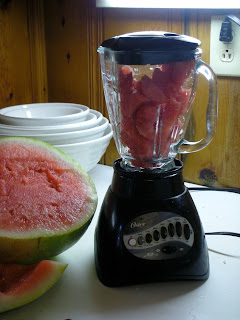 It's the 4th of July holiday weekend in the U.S., and watermelons are on sale everywhere. I came home from the grocery store, hot and thirsty, and realized what I wanted was some  cold watermelon juice. It's a cinch to make. Just cut up 4 cups of seedless watermelon (only the edible part, of course)  and put the chunks in the blender, then pulse it until everything is blended (turn it off and push down the pieces once or twice with a spoon if you need to get it started), then set a strainer over a bowl, line it with a folded cheesecloth (if you don't have one of these, you really ought to get one), and pour the pureed melon through the cloth, picking up the ends and twisting them to force the juice through the cloth. You could probably try using a tea strainer, but the cloth is very easy, and you can twist to get all of the juice out. 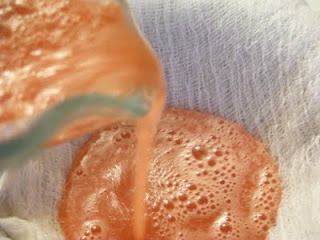 Watermelon juice is a lovely color, naturally sweet (but not too sweet) and exceedingly refreshing. It's one of the best kept secrets around. I don't know why more folks in the U.S. haven't discovered it yet. (Note: If you use a watermelon with seeds, you'll have to pick them out before you blend the melon.)
Enjoy!
Recipe #72: Pineapple Juice
Pineapple juice is a bit harder to make than watermelon juice. That's the reason I'm much more likely to use it in smoothies where you do not need to remove the pulp. However, the difference between homemade pineapple juice and store-bought is similar to the difference between homemade orange juice and even the so-called "fresh squeezed" juice in cartons. If you haven't cut open a pineapple (in the U.S. I buy the golden pineapples; in Ghana I go for the "sugar loaf" or "Cape Coast" pineapples), I generally cut the top and bottom off to make it flat, then set it on end and cut the outside peeling all the way around. I leave some of the "eyes" in the pineapple so that I don't cut too much of the fruit away, and then cut the eyes out. Then I cut the pineapple from the top to the bottom into quarters, and cut the core out from the center. 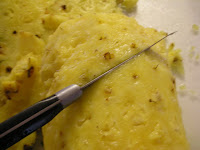 Follow the same directions as in making the watermelon juice: cut or break it into chunks, put them in the blender, pulse and pour through the cheesecloth over the strainer. Perhaps I should have blended mine a bit less, because this was much more difficult to strain than the watermelon. It made me think of milking a cow as I twisted the cheesecloth because it sometimes squirted out at me. Plus, I had to pour the already strained pineapple juice through a tea strainer to get it clear. BUT, the flavor was fabulous.
Hope you enjoy these. The fresh grated cassava cookies in the photo above are a work-in-progress. I'll update you on them soon, as well as a gari version.
Posted by Fran at 2:19 PM