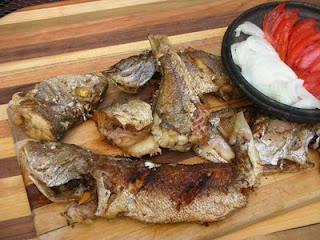 The first time I traveled to Ghana (1971) I lived in Nungua, where I taught school . It was there that I learned to love Ga kenkey (aka dokono), shito, and fried fish (kenam or kyenam). Though kenam and its accompaniments are easy to obtain in Ghana, I have to make all three of those myself in central Pennsylvania where I live. That classic meal was one of the first birthday dinners my nephews requested when they came to live with us in 2002.
Unless you're used to cleaning your own fish, this task may seem a little daunting at first, but if I can do it, anyone can. That's the only "hard" part.
Recipe #89: Ghana Fried Fish Version I (salted) 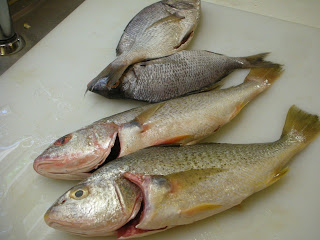 The Ga people living along the coast traditionally just rubbed salt over the fish before shallow fat frying it, and that's the first way I'll present. Most any fish will work: in Ghana we made it with red snapper, but I chose the least expensive and smallest fresh fish I could find at my local grocery today, which were croakers and porgies. Vendors in Ghana often use smallish fish. 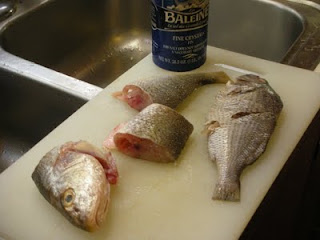 Vendors in Ghana often cook the fish longer, until it is very hard, because it will keep from spoiling longer, but the fish can also be cooked so that the inside is still soft, or medium hard if you prefer. As I said before, this is wonderful with any kenkey (Ga or Fanti), and fresh pepper sauces or shito, or even just some sliced onion and tomato.
Kenam, Version II (seasoned and stuffed) 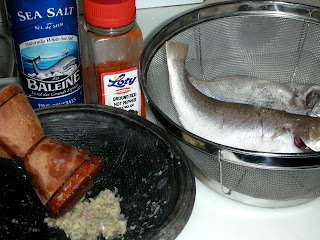 This is probably a more common way to make kenam nowadays. Follow the same procedure for cleaning and preparing the fish. However, leave the fish whole and do not cut it into pieces, but do make a slit or two diagonally on each side: 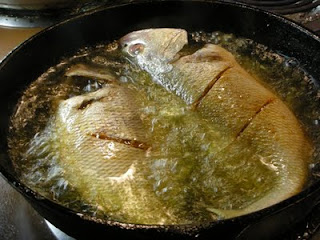 Sprinkle a little salt over both sides of each fish. Stuff the slits with the spice mixture and close the slits up. Shallow fry the fish as for version I above (about 5 minutes on each side, more if desired). You'll see my pan was a little too small and I had to force the fish to fit. Drain the fish on paper or paper towels before serving.

I have been hungry for fried fish and pepper sauce for about 3 months now! I think that will be the first thing I have when I go to Ghana in August! yum.....

I'm jealous! Have a great trip.