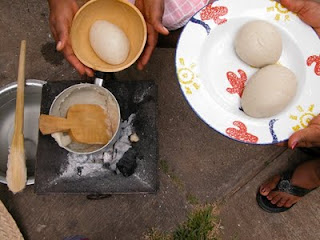 The Ewe people number between 3 and 6 million people (I've seen figures citing both),  mostly living in Southeastern Ghana in the Volta Region and also southern parts of neighboring Togo and Benin. While my collaborator Barbara Baeta can and does prepare dishes from all 10 regions in the country, she is an Ewe woman, and her heart belongs to places like Keta along the coast. On her own table, she displays a love of dishes featuring the  riches of the sea and coast, fresh and dried seafood, garlic, okra, and dishes including cassava dough, such as akple, the Ewe answer to banku. The main difference between the two is fermentation and the  cassava dough (banku is all or mostly made from fermented corn dough; akple is made from unfermented corn dough and cassava dough).

One of the challenges in writing our Ghanaian cookbook for folks outside of Ghana  is the difficulty in duplicating some of the ingredients easily found in any open-air market there,  such as corn dough and cassava dough, or even fresh cassava. However, the name of this blog and network, "BETUMI," comes from the Akan word "tumi," meaning "to be able to." 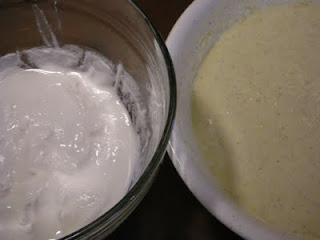 So, in the spirit of "can do," here is my approach to creating the doughs. I've already explained how to make fermented corn dough using white Indian Head corn meal (see the link to banku above), and 2 days ago I decided to try using dried hominy corn to make a smoother corn dough. That's the whiter one in the photo to the right and the  one I may use when I make the akple after my cassava dough is ready in a couple of days (Incidentally, the Goya corn I ground doesn't seem to be fermenting anyway. I wonder if it was treated with lime or something?) Or, you can make the dough as for banku (the one on the right in the photo), but without letting it ferment.

To make akple you need to combine twice as much corn dough as cassava dough. Today's recipe, following the sketchy directions in my notes, is for cassava dough:

"Peel cassava, wash it, grate it very fine, mix water if not too wet, put in a sack and put a stone or heavy pot on it and let drain for 2-3 days." 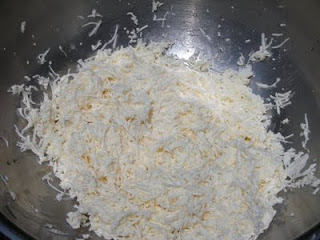 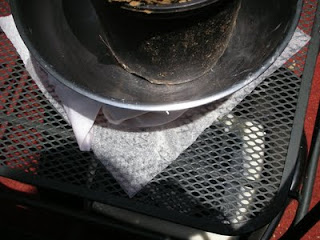