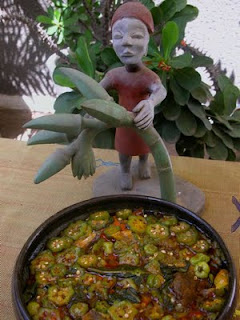 I have previously enthused about okra, aka Lady Fingers, that Cinderella of vegetables, and indigenous to West Africa. Among the Ewe people of the Volta Region, there is a short fat type of okra known as Anlo fetri after the region that type originated. It can be seen in the picture at the blog posting linked to above.  The Ewe word for okra is "fetri," and the word for soup or stew is "detsi." This version is the one we prepared at Flair Catering.. By the way, the picture at the left with the carving of the okra farmer shows a different kind of okra soup (fetri ma, a "heavy" okra soup using gboma leaves and sliced okra, which is too hard for me to duplicate in the U.S.). I just love the statue.
Recipe #91: Ewe-style Light Okra (Okro) Soup with Chicken (Fetri Detsi)
Assemble the ingredients:
First, the ingredients for seasoning the chicken to steam it (and the chicken): 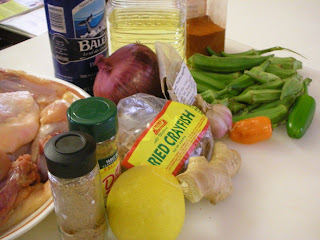 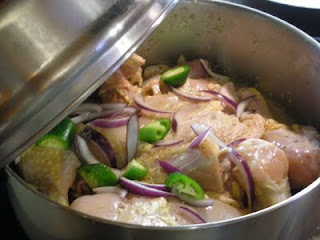 Traditionally, the chicken pieces would be removed after steaming and fried in a white oil (like peanut or canola) before proceeding, as is traditionally done for chicken groundnut stew. For health reasons Barbara Baeta omits that step and proceeds directly to making the soup, which is what I prefer, too, so I've omitted the frying altogether.

Ingredients for the soup after steaming the chicken: 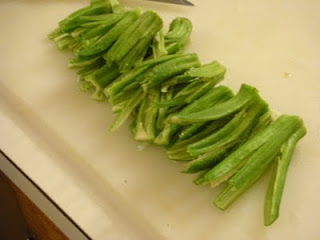 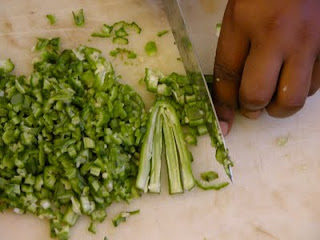 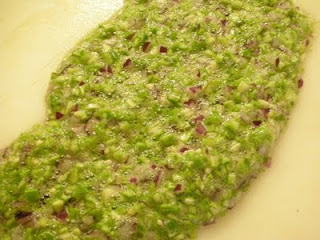 NOTE: I'm not sure why it was necessary to add the oil with the water and tomato paste. My chicken was very fatty and I needed to skim some of the oil off the top of the soup at the end, so I'm guessing that it would be possible to omit the oil in step #3 above.

This soup goes well with banku or the similar Ewe akple. It's also a "light" okra soup and a good first step for someone not used to eating okra. 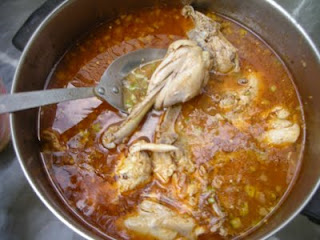 Hopefully this will be my second big meal with Baba's family in August. Banku and okra stew is one of my favorites!!!

I love fetri detsi. My sis-in-law taught me but I've developed a super fast version using fresh fish. I was unaware the chicken is fried (traditonally)in both this dish and groundnut soup. They never fried it at when I was at home.

BTW does gboma leaf have an english name?

Thanks for both your comments. I'm afraid I don't know the English name yet for gboma leaves. I hope to figure it out eventually. Also, what region are you from/where did you grow up?

My dad's kwahu (eastern region)from the mountains, but my mum is a Ga and I grew up mostly in Accra even though we moved from region to region my dad being transferred in his job(which is why I can appreciate TZ/satruga and the like). Then I was sent to Wesley Girls(capecoast). My dad retired (to Accra) when I was 15. I can speak a little twi, my Ga isn't too bad, but English has become my main language!

Hi Fran, i am trying to put together a list of some recipes for my brother who is living alone in the U.K. i find it easier looking up your recipes than writing them out by myself.I was wondering if you had a recipe for okro stew or soup made the Ga way or the average ghanaian recipe for Okro. And i must say, discovering your blog has widened by cooking options and made cooking more exciting. Thanks !!

Thanks, Fran for the recipes.Wonderful to read that your test kitchen was at Barbara Baeta, a legend in her own right. Keep up the good work!

Elaine:
Thank you very much for the encouraging words.

Mom, this one is sublime. I see why you took the time to document all the steps. Barbara's version could be served to dignitaries from any nation. I used a batch of assorted heirloom okra from the farmer's market. It was interesting seeding them as they all had different sizes and shapes.We all enjoyed it. Perhaps unorthodox, but I served it with your coconut waatche recipe.

Thanks, Abena. I'm glad it worked out. This version is a bit more work, but worth the effort, I think.

Hello Fran, looking forward to the cookbook! In the meantime, is it possible to post recipe for 'fetri ma' and the savoury chips made at Flair please. Thanks

The savory pastry chips recipe is online at http://betumiblog.blogspot.com/2011/07/recipe-74-savory-pastry-chips.html

Unfortunately, I do not have the fetri ma recipe out (problem with getting the appropriate ingredients).

Thank you for checking and taking the time to share. I, too, did some research on the specific type of eggplant, and there will be a recipe for gboma soup in the book due out in 2015.

It's very bad to say that poorer families would keep the seeds! That's an insult. Cooking is an art. Some people may choose to keep the seeds whilst others would not. That's a matter of taste and style. Please don't denigrate people by their choices. It's really really bad and inhumane! Thank you.