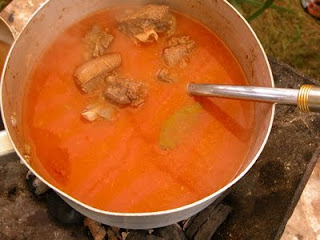 Hello, my friends:
I've been a woman with a mission these past 3 weeks as I've pretty single mindedly spent it in the kitchen (I've even moved my computer, camera, and printer in here).
I stopped to take stock today to re-evaluate my to-do list. Sigh . . . There are still over 50 recipes I want to include. I have 9 more days blocked out to work on this before "real life" intrudes on me again and my writing retreat ends. Tomorrow my nephew-son Sam returns to State College, bringing me Ghana yam and toasted corn flour, and you can expect to see recipes (and photos) of yam oto, yam chips, and coated yam (aka yam "French toast"), aprapransa (akplijii), versions of kaklo, and some more porridges.
Other recipes I plan to include: baked and roasted things like domedu (roast pork), or roast chicken, gari "biscuits," banana, peanut, and coconut cakes, and a number of combination and other soups and stews, e.g., bean and palmnut, groundnut [peanut] and palmnut, Fante-Fante (fresh fish soup), kontomire soup, okro soup, dried vegeatable soup, agushi soup, and maybe  hibiscus or sour sop soups, garden egg stew, egg curry, and groundnut stews with condiments. Of course, kenam (seasoned fried fish), plus more snacks and appetizers: squid and octopus, cheese straws, sugar cane. Other versions of jollof rice (corn, meat), kpokpoi (the Ga festival dish), and kotokyim (crabmeat stew), maybe an avocado and shrimp salad, acheke (aka attieke, a kind of cassava couscous). . . There are several Northern Ghana dishes I'd like to include, but the lack of ingredients may preclude that: wasawasa (steamed dried yam), ayoyo soup with Guinea fowl (made with Tossa jute leaves) soup, benisi (a cowpea leaves, millet, and shea butter dish). . .You get the idea.
Before I begin to despair, I'm going to stop and make some simple, satisfying light soup with goat (accompanied by fufu) for dinner.  As I've said elsewhere, this is the first soup I learned to make in Ghana when I was in my early 20s. It's still hard to beat. Basically, it's a basic vegetable stock which also includes goat. I was thrilled to discover goat meat in the freezer section of our local grocery store last week. Here's an adaptation of Flair Catering's version.
Recipe #75: Lovely Light Soup With Goat
Assemble ingredients.
To season
1 pound of goat meat cut into chunks, bone in: 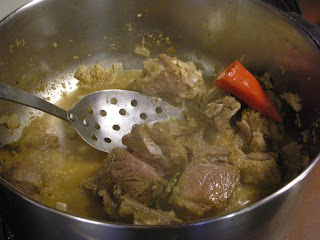 Put the goat meat in a soup pot and season it with the above ingredients. Stir the goat meat well, and add 1/2 cup water to the pot. Cover, bring the water to a boil, lower the heat to simmer while you prepare a second pot with: 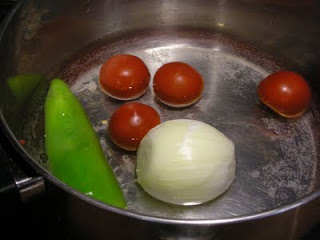 Bring that water to a boil and simmer 10 or 15 minutes until the vegetables are soft, then remove grind them together (in a blender or an asanka) and return them to the water in the second pot, along with 4 more cups of water. Stir in 1 tablespoon of tomato paste, let it simmer a few minutes, and add the broth to the meat. Let the soup simmer until the goat meat is tender, then remove the goat meat and, for a nice clear soup, strain the broth through a sieve, into the  using a spoon if necessary to help force some of the ground vegetables through the sieve (scrape the underside of the strainer with a spoon). Return the meat to the pot and adjust the seasonings (salt, onion, tomato, pepper, etc.) to taste. This may need to simmer for a couple of hours: goat meat tends to be tougher than beef. Add a little more water if necessary.
To simplify this recipe, grind the vegetables (tomatoes, onion, pepper) at the beginning and add them to the meat pot, along with 8 cups of water. Barbara insists that the best flavor is obtained if you first allow the goat meat to simmer for 15 minutes before adding the vegetable broth.
There are many variations of this recipe: you can cook some eggplant or zucchini in a saucepan, then blend and add it near the end for a thicker soup; or you can add many other vegetables like okra or mushrooms, or other herbs or seasonings.
This version is hard to beat. No added fats, either, it's the original "lite" soup. I'm going to enjoy mine with some fufu. Ahhhhhh! This should be called "Goat Light Soup for the Soul." 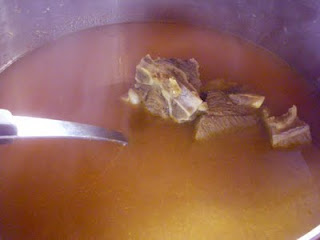 Wele update: Many Ghanaians love to chew wele (smoked cow hide), and it is often included in soups as a delicacy. However, it's one of those acquired tastes I never acquired. I notice that some concerns about using wele, however (like the now-banned  turkey tails) that are emerging.
Posted by Fran at 6:09 PM

Hmmmm. I just had a thought. Bet this would be a great candidate for a slow cooker version.

Wow!!! Sounds yummy. Feel like having right now. Thanks for sharing.

Question: why do you boil the onions, peppers & tomatoes before grinding them? What's the reason for that step?

I'm a creature of habit. I suspect it's because traditionally they softened the vegetables in the broth to make them easier to grind, which is how I learned, and I still do it. Do you just grind the vegetables at the beginning? I think my husband just does that.

yes, i just grind the vegetables at the beginning. Actually, in the market, there are ppl who have industrial grinders. So after purchasing our basket of tomatoes,onions and peppers, they would grind it for us right there. And we would have "pepper" for the week. I'm guessing that's not a Ghanian thing