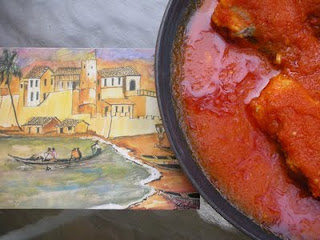 I always think of Fante-Fante as a red soup/sauce made only with very fresh fish. When I asked people in Ghana how to make this dish, which originated among the coastal Fanti people of the Western Region, I got multiple answers: one we prepared at Flair Catering, which was similar to a stew where some of the ingredients were first fried ; one I was told to do with similar ingredients as Flair's, but without frying them first (but "you never fry the fish"); finally, I was told it could be made it like a simple fish light soup without any palm oil. Some people said to grind the ingredients, others to grate them; some to add ground shrimp, others not to; some to steam the fish first separately in a little salted water and onion; some used ginger, but most did not; people often said to use seasoning cubes. It was somewhat confusing.
However, after sifting through all of the information, here are 2 versions. The first one, the one I made tonight, does not involve any frying; the second does.
Basic Fante Fante, Version I
Ingredients 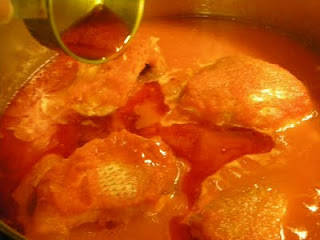 Variation: Omit the palm oil.
Fante Fante goes well with Fante kenkey, banku, yam, rice, potatoes, etc.
Fante Fante Version II (Flair)
When we prepared this dish at Flair Catering, we used basically the same ingredients, but grated the onion and omitted the fresh tomatoes, increased the palm oil to 1/2 cup, and reduced the amount of water.
After washing the fish with the lemon water, we shook off the extra water and seasoned the fish with:
While it marinated, we continued:

Let me hear from you. What version of Fante Fante do you use?
Posted by Fran at 6:34 PM

Hi Fran, great post as usual. Basically as I remember, Fante -FANTE is traditionally only made with fresh fish and eaten with fante kenkey.
My mom taught me to do it with the tomato gravy made with palm oil. She never had me use tomato paste but im sure this was her preference. Also onions must be sliced in rings and not in half moons. The fish must be fresh and lightly preseasoned before added to the tomatoe sauce. She never had me fry the fish..I think pple do that so the fish doesnt break apart easily. The fresh cut pre seasoned fish is then gently simmered for a few minutes to allow it to cook. Then served with Fante kenkey.
Seasonings:
Fresh ground red peppers only - makes it fragrant and spicy.
Freshly Ground ginger is added cos it takes helps reduce the pungency of the fresh fish.
=white pepper
- a dash of nutmeg - barely 1/8 tsp.
-sea salt..i remember my mom telling me not to use maggi cube for this stew but that was her preference.
I also remember a stew called 'mpatawa stew". This was made by layering tiny tialpia fish with freshly cut tomatoes, onion, palmoil and salt. This is slowly cooked. Its very very Fante as well. Hope this helps!

These both look like great versions of the soup! I have also found it funny how everyone cooks their soup differently. I like the method of seasoning and precooking used in the second method! I always add ginger, and to help with pureeing, I add the fresh tomatoes and peppers to the fish (or meat if making a different soup) while it steaming to soften them up! I will be making this tonight! -- Jennifer at Raisin Questions http://raisinquestions.wordpress.com