Recipes #81 and #82: Squid and Octopus Appetizers 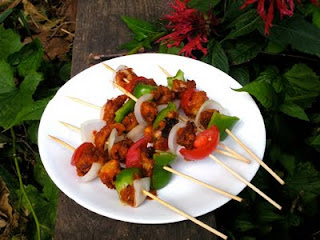 Octopus and squid are known as "blõsa" (bosa?) among the Ewe people. While this recipe was not part of the traditional diet, Barbara has adopted traditional seasoning and deep-frying cooking techniques to produce what has proven to be one of Flair's popular appetizers. While the recipe calls for octopus or squid, or a combination, other firm fish, or shrimp, could be substituted. Here are 2 ways of preparing this dish: one without a batter, and one with. 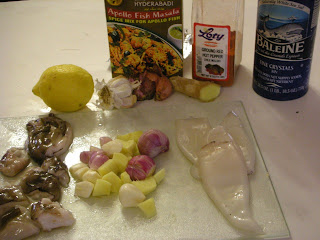 Recipe #81: Squid or Octopus Appetizer
In Ghana we used a kilo (a little over 2 pounds) of squid, and also a kilo of octopus. However, I believe that was before everything was cleaned and prepared, and I remember that we did not use the tentacles of the octopus. Barbara said that the kilo provided enough for 9 to 18 people.
However, when I prepared it in Pennsylvania, I was only able to find already cleaned and prepared baby squid (I did not buy the tentacles, just the tubular part of the body), and also baby octopus, which was quite a bit softer than the octopus we used in Ghana.
I recommend a pound of the squid (over a pound of the octopus, since I did not cook the tentacles from them, but only if you have another use for them. Or, you could try coating them as well. I did not.).
Assemble the ingredients:
For the seasoning: 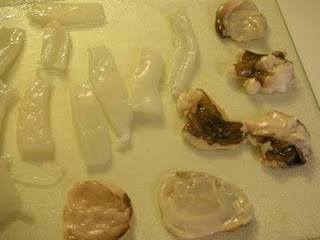 To fry the squid/octopus:
To prepare:
Serving: At Flair they often dip the pieces in a gravy and serve them on a skewer like a kebab, alternating the fried octopus with fried squid, sweet bell pepper,  tomato, and/or onion slices. I made a basic Ghana gravy (with hot pepper), dipped the fried pieces in it, and threaded them on skewers that way, as shown in the photo at the top. Another way they eat them is with little steamed cassava "pancakes" called yakayake, but I have neither the dough nor the equipment to make those. Sometimes, when they cook a large fish at Flair, they sprinkled the fried squid or octopus over it as a garnish.
Recipe #82: Batter-coated Squid and Octopus Appetizer 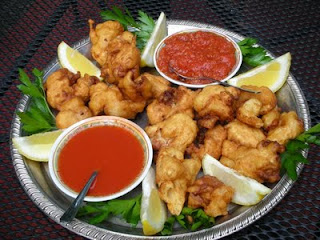 The  way I got cautious Sam to be willing to try (and like) squid and octopus, was to dip them in batter before frying them.
For this recipe, you follow the same instructions as for #81, but there is an additional step. Actually, it's a good idea to make the batter first, then let it rest while you prepare the squid/octopus. As I noted above, in Ghana we made a double batch of this, but I'm cutting the recipe in half here.
Assemble the ingredients:
To prepare:
To serve: I served this with a couple of different sauces: a hot sauce and a horseradish cocktail sauce. It would also go well with shito or ketchup. It goes well with any drink (beer, red or white wine, soda, juices) as an appetizer, or as a savory snack with tea or coffee.
Isn't it about time you had a party?
Posted by Fran at 6:47 PM